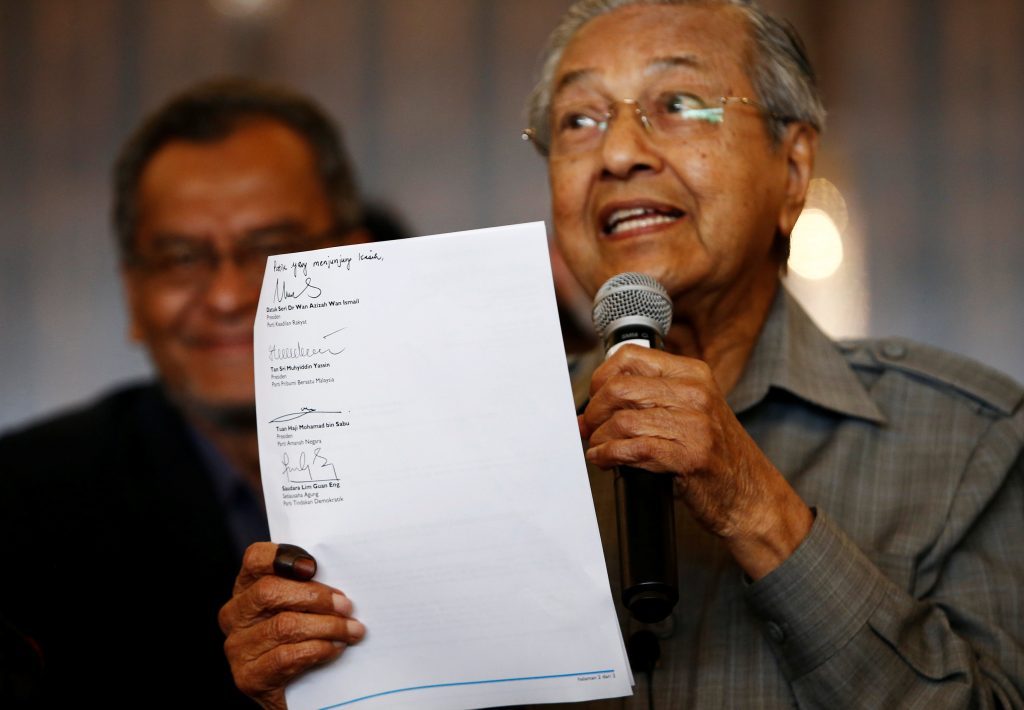 Mahathir Mohamad’s shock Malaysian election win has raised concerns his populist promises could undermine economic prospects at an increasingly challenging time for emerging markets, despite hopes elsewhere he may revive his bold approach to economic management.

The Southeast Asian economy, while vulnerable in some areas, is widely seen as being in better shape than regional peers, the Philippines and Indonesia, which run current account deficits. Malaysia has also halved its budget deficit since the global financial crisis.

Its economy is one of the fastest growing ones in the world, rising at close to 6 percent, and its stock market in dollar terms is the second-best performing in Asia. And a surge in crude prices to 3½- year highs has helped the net energy exporter’s income.

But the country may be left without key sources of revenue if Mahathir keeps his pledge to remove the goods and services tax and toll fees, bring back fuel subsidies, raise minimum wages. Protectionist overtures on Chinese infrastructure projects have also raised concerns about foreign investment.

Such a policy shift comes amid heightened fears about capital outflows following a rise in U.S. Treasury yields.

“Some campaign promises, such as abolishing GST and reintroducing fuel subsidies, may boost consumption but, without offsetting measures, would adversely affect the country’s budget deficits and sovereign rating,” said Eli Lee, head of investment strategy at Bank of Singapore.

“At a time of growing pressure on emerging markets, currencies and bonds, the situation in Malaysia bears careful watching for potential knock-on effects.”

Mahathir ruled Malaysia with an iron fist from 1981 to 2003. On Wednesday, his opposition coalition defeated his former mentee Prime Minister Najib Razak and the UMNO bloc, which has governed Malaysia for six decades.

Ratings agency Moody’s was prompt in warning that Mahathir’s promises were credit negative for its A3 ratings if implemented without any other adjustments.

Local markets are closed for the week but a fall in the ringgit in offshore trading and a rise in the cost of insuring the country’s debt showed investors are nervous about the country’s first political change in six decades.

“This upset ranks up there with Brexit and Trump’s election,” said Aninda Mitra, senior sovereign analyst at BNY Mellon Investment Management. “I think there will be short-term volatility.”

While Malaysia’s 6-percent GST sparked large street protests when it was introduced in 2015, it helped mitigate a 30-percent drop in oil revenues, pulling back the ringgit from 10-year lows.

Foreign investment has since returned as well, although largely fueled by China’s soft-power push into Southeast Asia.

Projects such as the $100 billion Forest City residential development near the Singapore border and the $13 billion East Coast high-speed railway, part of Beijing’s Belt and Road Initiative, were seen as boosting jobs, but prompted discontent about increasing Chinese influence.

While many analysts have criticized some of the Chinese projects as white elephants, investors now fear the billions they pencilled in from Beijing may not be forthcoming.

Additionally, Mahathir’s promise to seek a royal pardon for jailed political leader Anwar Ibrahim, his one-time deputy whom he famously fell out with in 1998, and let him become prime minister, might also raise questions about policy, if it happens.

“The market is uncertain about (Anwar) and also whether he will take over the administration,” Commerzbank analyst Charlie Lay said. “This election looked like the old UMNO versus the new UMNO. People don’t know where to put Anwar in that.”

Despite these concerns, Mahathir has a record of bold measures that deliver. In the aftermath of the 1997 Asian financial crisis, he pulled Malaysia away from IMF-imposed austerity and slapped on currency and capital controls, in moves that ultimately helped Malaysia endure a shallower loss of economic output than Indonesia, Thailand or South Korea.

His pledge to tackle corruption and nepotism raises hopes of a long-term fix of governance and public institutions.

A removal of GST and new subsidies may also boost consumption, which was at risk given Malaysia’s high level of household debt. Morgan Stanley analysts remain overweight in sectors such as banks, healthcare and telecommunications.

Analysts at Fidelity International note during his first stint in power, Mahathir initiated many of the country’s major infrastructure projects.

“We are looking at when to buy, given most of these pre-election promises are not adhered to,” said Fidelity’s head of Asian fixed income Bryan Collins.

“Back in the day, Mahathir was a pragmatic person and is less likely to completely close the economy.”