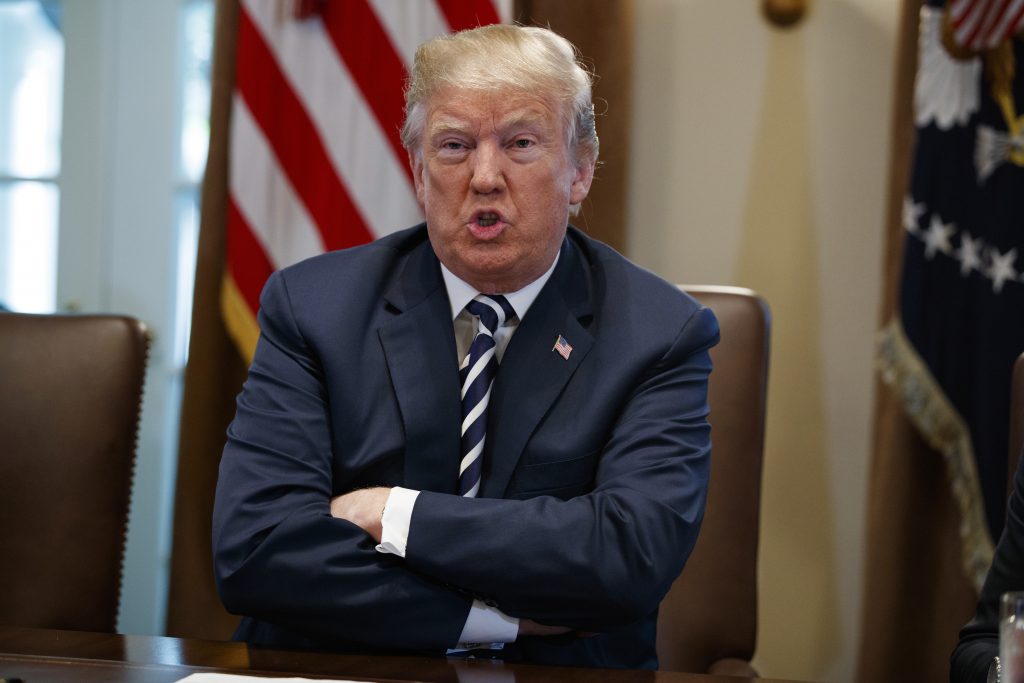 President Donald Trump warned Iran on Wednesday against resuming its nuclear weapons program, a day after announcing that he was withdrawing the U.S. from the landmark Iran nuclear deal.

“I would advise Iran not to start their nuclear program,” Pres. Trump told reporters at the start of a Cabinet meeting when asked about the potential consequences. “I would advise them very strongly. If they do there will be very severe consequence.”

The comments came a day after Pres. Trump announced he was withdrawing the U.S. from the accord with Iran, abruptly restoring harsh sanctions in the most consequential foreign policy action of his presidency. He declared he was making the world safer, but he also deepened his isolation on the world stage and revived doubts about American credibility.

The 2015 agreement, which was negotiated by the Obama administration and included Germany, France and Britain, had lifted most U.S. and international economic sanctions against Iran. In exchange, Iran agreed to restrictions on its nuclear program, making it impossible to produce a bomb and establishing rigorous inspections.

But Pres. Trump, a severe critic of the deal, dating back to his 2016 presidential campaign, said Tuesday in a broadcast address from the White House that it was “defective at its core.”

On Wednesday, he claimed the deal “was going to lead to nuclear proliferation all over the Middle East” and bragged the sanctions would be among the strongest “that we’ve ever put on a country.”

Pres. Trump also pointed to Iran’s actions in countries including Syria and Yemen.

“With all of the places they’re involved, it’s bedlam and death and we can’t allow that to happen,” he said, adding: “They’ve gotta understand life. ‘Cause I don’t think they do understand life.”

U.S. allies in Europe had tried to keep Pres. Trump in and lamented his move to abandon it. Iran’s leader ominously warned his country might “start enriching uranium more than before.”

The sanctions seek to punish Iran for its nuclear program by limiting its ability to sell oil or do business overseas, affecting a wide range of Iranian economic sectors and individuals.

Major companies in the U.S. and Europe could be hurt, too. Treasury Secretary Steven Mnuchin said that licenses held by Boeing and its European competitor Airbus to sell billions of dollars in commercial jetliners to Iran will be revoked. Certain exemptions are to be negotiated, but Mnuchin refused to discuss what products might qualify.

He said the sanctions will sharply curtail sales of oil by Iran, which is currently the world’s fifth largest oil producer. Mnuchin said he didn’t expect oil prices to rise sharply, forecasting that other producers will step up production.

Iran’s government must now decide whether to follow the U.S. and withdraw or try to salvage what’s left with the Europeans. Iranian President Hassan Rouhani said he was sending his foreign minister to the remaining countries but warned there was only a short time to negotiate with them.

Pres. Trump also left open the possibility of a new deal, and told reporters Wednesday: “We’ll make either a really good deal for the world or we’re not going to make a deal at all.” He predicted Iran would choose to negotiate eventually, or face consequences.

The administration said it would re-impose sanctions on Iran immediately but allow grace periods for businesses to wind down activity. Companies and banks doing business with Iran will have to scramble to extricate themselves or run afoul of the U.S. government.

Meanwhile, for nations contemplating striking their own sensitive deals with Pres. Trump, such as North Korea, the withdrawal will increase suspicions that they cannot expect lasting U.S. fidelity to international agreements it signs.

Former President Barack Obama, whose administration negotiated the deal, called Pres. Trump’s action “misguided” and said, “The consistent flouting of agreements that our country is a party to risks eroding America’s credibility and puts us at odds with the world’s major powers.”

Yet nations like Israel and Saudi Arabia that loathed the deal saw the action as a sign the United States is returning to a more skeptical, less trusting approach to dealing with adversaries.

Pres. Trump said Tuesday that documents recently released by PM Netanyahu showed Iran had attempted to develop a nuclear bomb in the previous decade, especially before 2003. Although Pres. Trump gave no explicit evidence that Iran violated the deal, he said Iran had clearly lied in the past and could not be trusted.

In a burst of last-minute diplomacy, punctuated by a visit by Britain’s top diplomat, the deal’s European members had given ground on many of Pres. Trump’s demands for reworking the accord, according to officials, diplomats and others briefed on the negotiations. Yet the Europeans realized he was unpersuaded.

In Iran, many are deeply concerned about how Pres. Trump’s decision could affect the already struggling economy. In Tehran, Pres. Rouhani sought to calm nerves, smiling as he appeared at a petroleum expo. He didn’t name Pres. Trump directly, but emphasized that Iran continued to seek “engagement with the world.”