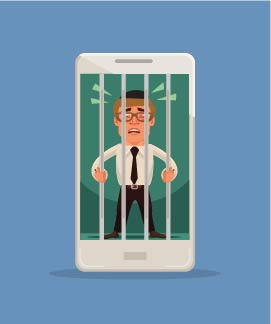 As most of us who have served as a shliach tzibbur in sparsely attended minyanim have discovered, part of the job is making sure that enough mispallelim are more or less holding where you are. Though most shuls require the person davening for the amud to start at a scheduled time, there is a reasonable chance that a considerable percentage of mispallelim will get a delayed start, or the baal tefillah may simply be davening too fast.

One recent morning, after concluding Krias Shema, I turned around to see whether a sufficient number of the mispallelim had already reached this point. As I scanned the assembled, I found that I had more than enough of a quorum with which to proceed.

I was about to turn back to the amud when I noticed something very disturbing.

A yungerman with whom I have been davening for a while — and whose name I still don’t know — was sitting, wearing tallis and tefillin, his siddur open to Krias Shema, and typing intently on his phone. While this unfortunately wasn’t the first time I had witnessed such a scene, this particular yungerman had always made an impression on me as someone who was both refined and serious about his Yiddishkeit.

Perhaps he was communicating with a doctor about a medical emergency, I thought to myself, trying to be dan l’chaf zechus. Or maybe he is expecting a family simchah momentarily, and was finding out whether he needed to rush home to take his wife to the hospital.

After I had concluded Shemoneh Esrei, I turned around again to gauge whether it was time to begin chazaras hashatz. The yungerman was still sitting there, his siddur indicating that he too had finished Shemoneh Esrei. But his eyes were glued to his phone, and his fingers were once again typing a message.

After the last Kaddish had been recited and I had taken off my tefillin, I walked over to the yungerman — who was still fiddling with his phone — and began a friendly chat. After a few minutes, I was able to shift the conversation to the topic of social messaging, and found the yungerman very willing to talk about it.

“I am addicted, and really want to do something about it,” he openly admitted. “In the winter I sometimes leave my phone in my coat during davening, but now, when the weather is warm, that isn’t an option …”

I pointed out to him if we manage an entire Shabbos and Yom Tov, we certainly can manage to refrain from using a device for the three-quarters of an hour we spend davening Shacharis.

“It isn’t so simple,” he murmured in a pained voice, looking down at the table. “Not everyone manages to refrain from texting on Shabbos …”

In many ways, it has never been easier to be a shomer Shabbos. The workplace is extremely accommodating of our religious needs. From Shabbos clocks, crockpots, and even Shabbos lamps, there is no shortage of inventions intended to minimize the test of shemiras Shabbos. It may seem inconceivable that individuals who externally appear to be upstanding members of our community are so addicted to using their hand-held devices that they are no longer shomer Shabbos. But, tragically, this is the reality we are facing, and we no longer can afford to sweep this crisis under the rug.

While chillul Shabbos is one of the most extreme cases of this addiction, the destruction caused by the pervasive misuse of technology is far more widespread that most of us would like to acknowledge. Yet as long as we will pretend that it doesn’t exist, and that smartphones are simply an updated version of a cordless phone — an item that can be misused in extreme cases but is inherently safe for all to use — it is impossible to come up with real solutions.

It is imperative that we recognize that these forms of technology are the equivalent of a loaded gun or a controlled substance. While they can be carefully used in a proper way by the right people in the right way and at the right times — they still remain inherently dangerous.

Recently, I spoke to a very fine young man from a wonderful family who told me that he doesn’t understand why such an issue is being made about technology.

“Surely the majority of users act in a very responsible way,” he argued.

I responded by telling him a story.

A few weeks ago, two young boys were waiting one morning for the bus to take them to cheder. Though they are technically old enough — and mature enough —to get on the bus by themselves, many mornings their mother waits with them. Moments before the bus was scheduled to arrive, the older boy remembered that he wanted something from upstairs. Worried that he would miss his bus, the mother graciously offered to get it, but cautioned her son that by the time she returned, the bus might have arrived.

When she made it back down the stairs, her grateful sons were still there.

“I wanted to say Tehillim so that the bus shouldn’t come until you come back,” the older boy told his mother. “But we didn’t have a Tehillim. Then I remembered that the Shir Hamaalos we sing before bentching is also in Tehillim, and that we know by heart, so we said it together …”

I contrasted this moving anecdote with a story that happened about a year ago.

A house went up in flames in an upstate Jewish community. A passerby — or perhaps it was a neighbor — took out his phone and recorded the tragic scene, and promptly sent the clip out to his social media group. Within minutes, it had been widely shared and watched by people throughout the world.

“Hopefully the fire department had already been called, and the residents rescued,” I told him. “But what was so clearly missing was feeling pain for the family losing their home and possessions, saying Tehillim on their behalf, instead of callously taping their tragedy.”

The young man looked at me quizzically.

“I don’t understand your issue,” he told me. “A fire is a very interesting scene. Why shouldn’t someone want to record it and send it around?”

“You have just proved my very point,” I rejoined.

“Let me ask a question,” I told him. “A monkey up in the tree who sees a fire in the distance is also fascinated by it. In fact, since he can climb higher and easier than a man, he has a much better view. So what differentiates, in your worldview, man from a monkey?”

I am still waiting for his answer….

This is precisely what social media and much of group messaging has done to us. It has so diluted our natural sensitivities and frozen our instinctive emotions as Yidden, that for all intents and purposes we have been stripped of our humanity.

In many cases, it isn’t a matter of revenge (although, sadly, this also plays a role in many anonymous social media messages) or even of sinas chinam. Rather, what lies behind the message or embarrassing clip is a heart that has turned to ice and a soul that has been surrounded by steel — solely the result of long-term usage of these devices and media. In the process, some of the most basic concepts of Yiddishkeit — such as tznius, refinement, and respect for the privacy of others — have been washed away in the dreadful sewage known as social media. We have become so accustomed to these breaches that we don’t even realize the depth of this calamity.

Recently, I had an inspiring and uplifting experience.

The driver of the car service I was in was clearly Jewish — he spoke English with a heavy Hebrew accent. However, it was too dark in the car to see whether he was wearing a yarmulke. After a few minutes of driving, I noticed that he had made a wrong turn and was now heading in the opposite direction of the address I had given him. I tried my best to get his attention and notify him of his error, but he was so engrossed in the heated conversation he was having on his Bluetooth — in Hebrew — to hear anything I was saying. When he finally ended the call, we had traveled some 10 blocks out of the way.

He immediately apologized to me, explaining that a friend of his — who was spending time with an ill relative in the hospital — had asked him to download some videos on his smartphone for him.

“I was trying to explain to him that my filter doesn’t allow me to do such a thing,” the driver told me. “It blocks all videos and clips.”

“Ashrecha!” I told him. “How fortunate you are that you realize the importance of having such a strong filter!”

The driver seemed surprised by the praise.

May we all learn from his example.