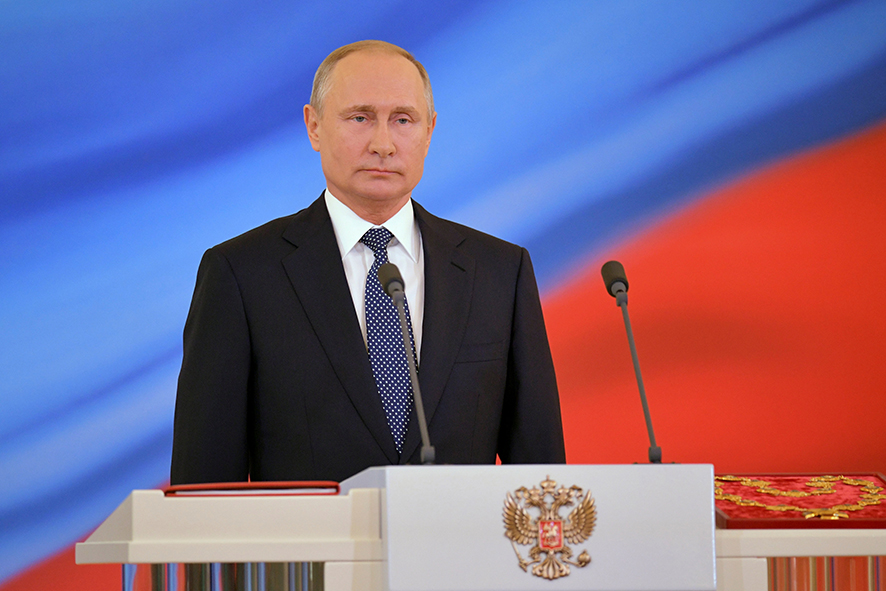 Vladimir Putin was sworn in for another six years as Russian president on Monday.

Standing in the Grand Kremlin Palace’s ornately-decorated Andreyevsky Hall with his hand on a gold-embossed copy of the constitution, Putin swore to serve the Russian people, safeguard their rights and freedoms, and defend Russian sovereignty.

Putin was inaugurated for his fourth term as president two months after more than 70 percent of voters backed him in a presidential election in which he had no serious challengers.

His most dangerous opponent, Alexei Navalny, was barred from running in that vote and on Saturday Navalny and hundreds of his supporters were detained by police while protesting over Putin’s new term under the slogan: “Putin is not our tsar.”

Putin, who is 65, embarks on his fourth term in office buoyed by widespread popular support but weighed down by a costly confrontation with the West, a fragile economy and uncertainty about what happens when his term ends.

The Russian constitution bars him from running again when his new terms ends in 2024.

Earlier, Putin switched to traveling in a new Russian-made limousine, ditching the imported vehicles he has been using up to now, Russian state media reported.

The new Russian limousine had its first public outing on Monday when Putin climbed into the vehicle to travel the short distance from his office to the Kremlin hall where he was sworn in.

Details of the new limousine have not been revealed, but it will become the heir to the Russian-made ZIL sedans that for decades transported Soviet leaders.

Putin has said that Russia should reduce its dependence on imported goods and technology, a drive that has gathered pace since Russia was hit by Western sanctions.