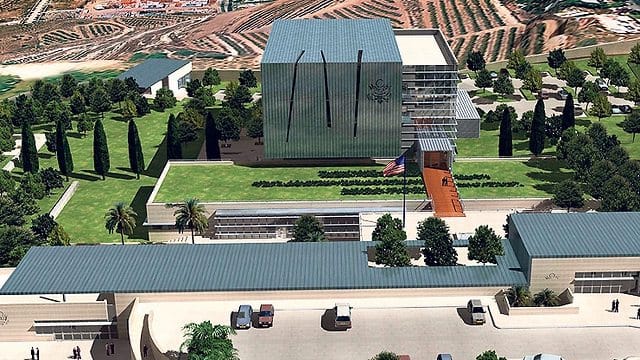 Photos of a sign put up on Monday pointing to the new U.S. embassy in Yerushalayim that were widely carried in the media were in a sense, misleading.

The sign points to the temporary embassy. The real thing, the permanent housing for the American mission that has caused so much consternation, is still years away.

Six years to be exact, at least by official reckoning. The grounds of the embassy complex-to-be will extend over 75,000 square feet. Plans call for a 9-foot-high wall to keep out journalists and other unwanted visitors, an escape route, an access road, an opulent, high-end chamber and office for the ambassador, as well as living quarters.

The new embassy will be built on the current site of the Diplomat Hotel, which is about to be demolished to make way for embassy structures.

In a departure from projects of this sort, an Israeli architectural firm — Amir Mann / Ami Shinar Architects & Planners — was hired for the job of building the consulate, rather than the usual American consortium. The embassy, however, will probably be built by American firms.

The cost of all this magnificence was estimated in an internal document at 1 billion dollars. But President Trump, who complained about what he considered to be the excessive cost of the new American embassy in London, said the Yerushalayim complex will be kept down to half a million, according to Ynet.