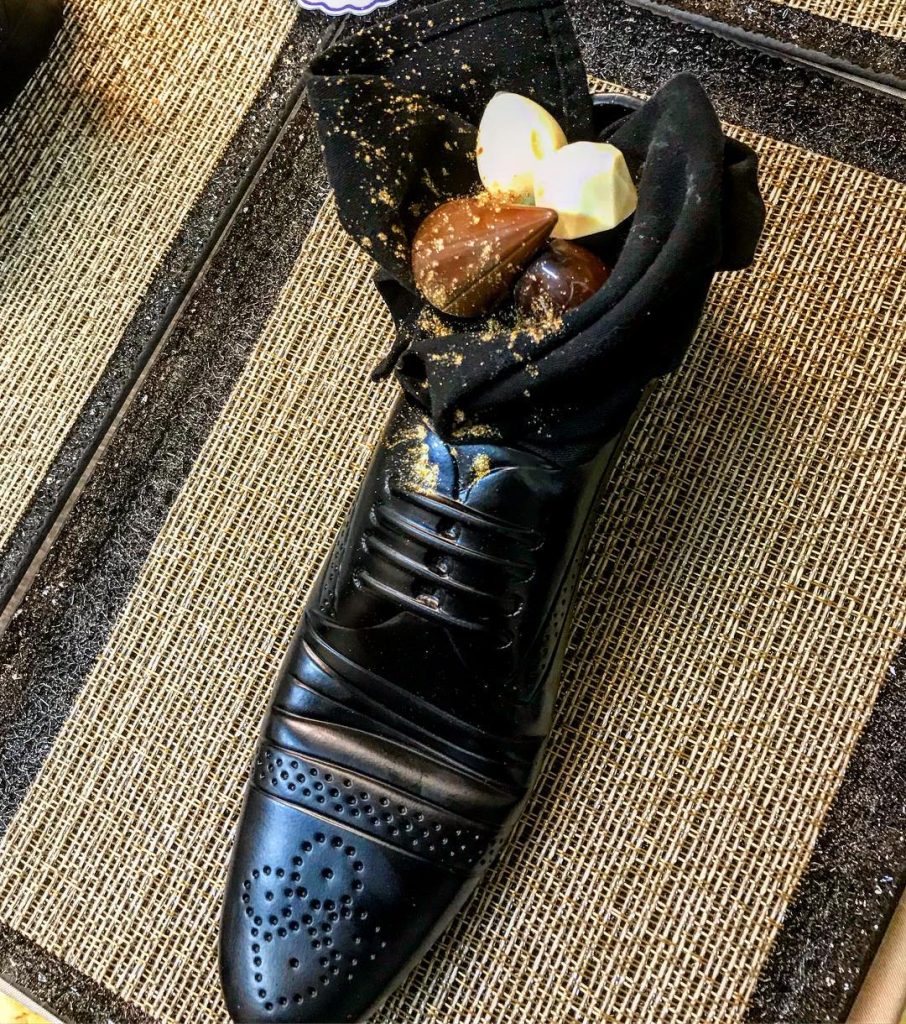 There aren’t that many cultures where putting a shoe on the dining room table is acceptable behavior, but for the Japanese there is clear etiquette against allowing outdoor shoes inside.

That might explain the furor following a visit by Japanese Prime Minister Shinzo Abe and his wife, Akie Abe, to Israel last week.

After a day of high-level meetings on May 2, the Japanese leader was treated to a festive meal at the official residence of Prime Minister Benjamin Netanyahu and his wife, Sara Netanyahu. It was their second time in Israel, and the visiting couple were served a top-notch meal by celebrity Israeli chef Moshe Segev.

But then came dessert. A selection of delectable chocolate pralines — artistically arranged inside a shiny leather shoe.

“This was an insensitive decision,” the article quoted one unidentified senior Israeli official as saying. “There is nothing lowlier than a shoe in Japanese culture. Not only do they not wear shoes at home, you also won’t find shoes in their offices. This is disrespect of the first order.”

A Japanese diplomat, also not named by the paper, said: “There’s no culture in the world in which you put shoes on the table. What was the distinguished chef thinking? If it was humor, we don’t think it is funny; we were offended on behalf of our prime minister.”

Israel’s Foreign Ministry said in a statement that it was not involved in approving the dishes for the meal.

“We respect and appreciate the chef. He is very creative,” the ministry said.

Segev’s creative side was displayed last May when President Trump visited Israel. Then, the celebrity chef served up a dessert in the shape of a double-headed Trump and Netanyahu.

On Sunday, Segev proudly posted a close-up photo of the offending shoe-filled dessert on his social media account, writing: “Chocolate selection from the world by #SegevArt – – – A metal shoe by @tomdixonstudio”

“The dessert was served inside a sculpture by international artist Tom Dixon, whose works are displayed in major museums around the world and for the first time was displayed in Israel at a meal. This is a high-quality piece of art made of cast metal in the shape of a shoe; it is not a real shoe,” Segev’s publicist said in a statement, according to Yediot Aharonot.

On social media, however, some of his 72,000 followers offered a different opinion:

“When you cook at a diplomatic meal, the minimum you can do is inquire about the guest. In Japan, shoes are considered contemptible, they always take off their shoes at the entrance to every home, both for themselves and for others,” wrote one person.

Another person wrote: “You don’t need to know any culture to know that serving shoes at a dinner is WRONG!”

Serving dessert in a shoe was not the only controversy caused by the visit. On Friday, Netanyahu uploaded a short video clip to his social media account complaining about a lack of media coverage of the visit.

“I want to tell you something, Japan’s prime minister visited here. He leads the world’s third-largest economy. He brought with him an enormous delegation of businessmen, the heads of the largest corporations. You know the names: Mitsubishi, Mitsui, and many others. Did you hear anything about this in the media? Nothing! So open my social media page and learn about this,” said Netanyahu in Hebrew.

Israeli journalists responded by pointing out that the Hebrew media ran more than 50 items about various aspects of the trip, the Times of Israel news website reported. They also highlighted that the two leaders did not hold a news conference.

“Prime minister, perhaps it’s time to stop with the fake news!!! Not only did you not allow the journalists into your meetings with the Japanese prime minister, except for pool photographers, the media did actually report on this visit. So maybe you should delete this embarrassing post?” wrote Itamar Eichner, Yediot Aharonot’s longtime diplomatic correspondent.