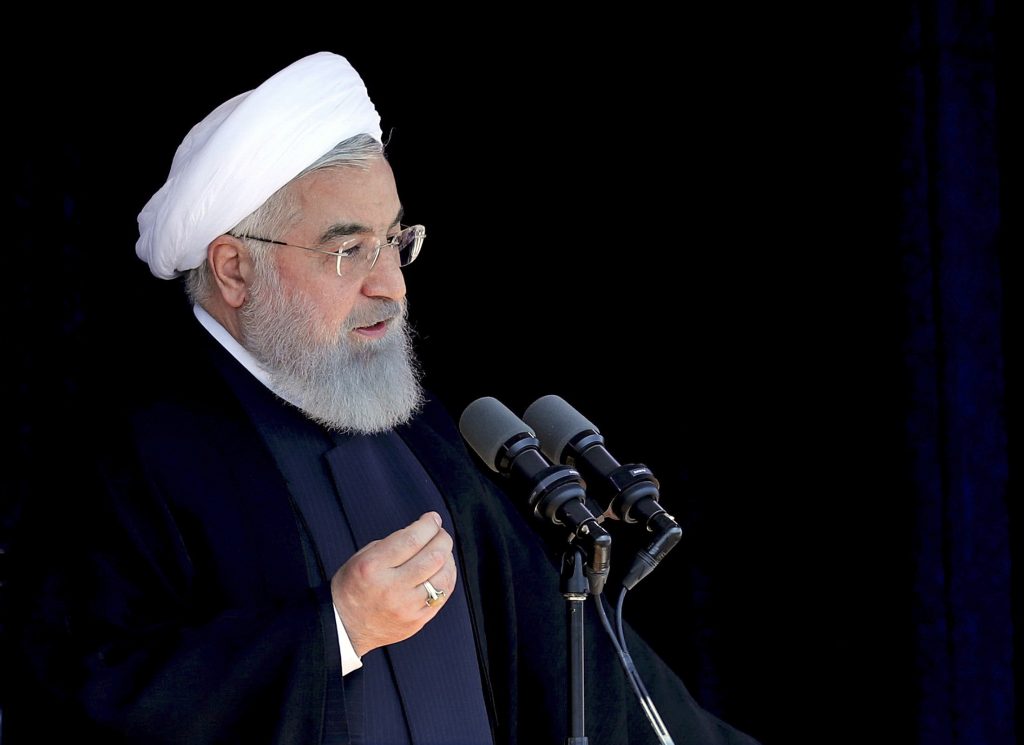 Iranian President Hassan Rouhani hinted on Monday that Iran could remain in its 2015 nuclear deal with world powers even if the United States dropped out but Tehran would fiercely resist U.S. pressure to limit its influence in the Middle East.

President Donald Trump, a long-time critic of the deal reached between Iran and six powers in 2015 before he took office, has threatened to pull out by not extending sanctions waivers when they expire on May 12, unless European signatories of the accord fix what he calls its “flaws.”

Under the agreement with the United States, France, Germany, Britain, Russia and China, Iranstrictly limited uranium enrichment capacity to satisfy the powers that it could not be used to develop atomic bombs. In exchange, Iran received relief from sanctions, most of which were rescinded in January 2016.

Rouhani said the Islamic Republic had been preparing for every possible scenario, including a deal without Washington – which would still include the other signatories that remain committed to it – or no deal at all.

“We are not worried about America’s cruel decisions … We are prepared for all scenarios and no change will occur in our lives next week,” Rouhani said in a speech broadcast live on state media.

“If we can get what we want from a deal without America, then Iran will continue to remain committed to the deal. What Iran wants is our interests to be guaranteed by its non-American signatories … In that case, getting rid of America’s mischievous presence will be fine for Iran.”

“If they want to make sure that we are not after a nuclear bomb, we have said repeatedly that we are not and we will not be,” said Rouhani, who engineered the nuclear accord to ease Iran’s isolation.

“But if they want to weaken Iran and limit its influence whether in the region or globally, Iran will fiercely resist.”

Tehran has made repeated threats to walk away if Trump does, but several Iranian officials told Reuters last week that as long as Tehran was not excluded from the global financial and trading system, it could consider respecting the accord.

Diplomats say Tehran would rather the deal remain intact out of concern about a revival of domestic unrest over economic hardships that mounted over the years sanctions were in place.

Britain, France and Germany remain committed to the accord and, in an effort to address U.S. complaints, want to open talks on Iran’s ballistic missile programme, its nuclear activities beyond 2025 – when pivotal provisions of the deal expire – and its role in the wars in Syria and Yemen.

Whatever Trump decides, France, Britain and Germany will stick to the deal because it is the best way to stop Iran developing a nuclear bomb, French Foreign Minister Yean-Yves Le Drian said on Monday after meeting his German counterpart.

German Foreign Minister Heiko Maas said the deal, which is being policed by U.N. nuclear inspectors, “makes the world safer,” and would do everything possible to uphold it.

British Foreign Secretary Boris Johnson, now in Washington for talks, said the deal had weaknesses but these could be remedied. “…At this moment Britain is working alongside the Trump administration and our French and German allies to ensure that they are,” he said in a commentary in the New York Times.

“I am sure of one thing: every available alternative is worse. The wisest course would be to improve the handcuffs rather than break them.”

Even if Trump rejects a possible remedy being worked out by U.S. and European officials and decides to bring back sanctions, the most drastic U.S. measures targeting Iran’s oil sales will not immediately resume.

There are at least two avenues potentially offering more time for talks after May 12.

The agreement has a dispute resolution clause that provides at least 35 days to consider a claim that any party has violated its terms. That can be extended if all parties agree.

And if Trump restores the core U.S. sanctions, under U.S. law he must wait at least 180 days before reimposing penalties on banks of nations that do not slash purchases of Iranian oil.

Iran’s clerical rulers have repeatedly ruled out reducing its sway across the region, as demanded by the United States and its European allies. Tehran says its missile capabilities are purely defensive and nuclear ambitions only civilian in nature.

The U.N. nuclear watchdog says it is maintaining the “world’s most robust verification regime” inIran and has repeatedly said Tehran is complying with the deal terms.