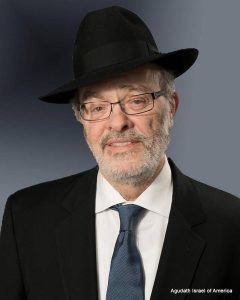 A son of Holocaust survivors, Reb Mendy was a self-made man who never forgot where he came from. In addition to his constant giving, those who were privileged to know him said that his sense of responsibility and caring for Jews everywhere is what defined his endless involvement in efforts for both the klal and for individuals in need.

Harav Elya Brudny, shlita, Rosh Yeshivah, Yeshivas Mir of Flatbush, who shared a close personal bond with Reb Mendy, said that he was “a pela [wonder].”

“He lived a lot of his life in abject poverty, but always had a simchas hachaim whether he was [struggling, in the early years, or later] when he became so successful,” Rav Brudny told Hamodia. “He had a sense of empathy and a heart for Klal Yisrael and for every Yid that was unbelievable.”

Rabbi Simcha Dessler, Menahel of the Hebrew Academy of Cleveland, told Hamodia that Reb Mendy’s generosity and dedication to the needs of the klal put him in a league of his own.

“He was a larger-than-life personality who had a far-reaching vision and raised the bar of tzedakah v’chessed locally, nationally and internationally. He taught us the art of giving on a scale that one rarely sees,” said Rabbi Dessler.

In his hesped, delivered Erev Shabbos at the Hebrew Academy of Cleveland, Rabbi Dessler called Reb Mendy “an icon in the community, a legend in Klal Yisrael and a remarkable ambassador for Yiddishkeit who cared enough to make a difference. He was an extraordinary askan whose passion was unique, whose generosity was incredible and whose heart was large enough for all to enter; he could not say no and always preferred to do his chassadim anonymously.”

In Cleveland, where he made his home for much of his life, Reb Mendy was one of the key supporters of the community’s mattan b’seiser and bikur cholim, as well as the leading force in funding its mosdos hachinuch. In addition to doing all that was in his ability to help the Hebrew Academy of Cleveland, where his own children and grandchildren were students, Reb Mendy personally assumed financial responsibility for Yeshivas Derech haTorah and Telshe when both faced serious financial challenges.

In recent years, Cleveland’s kehillah has seen a period of rebirth and growth. Rabbi Dessler said that this was due in no small part to Reb Mendy’s stalwart support of several community kollelim.

“He was an integral part of the renaissance of Cleveland’s Jewish community who believed that a community grows by importing kollel avreichim and realized early on that, in addition to the Torah study they bring, their presence and that of their families elevates and changes every aspect of the community,” he said.

His home saw a steady stream of individuals in need of financial assistance who were greeted with Reb Mendy’s signature warmth as well as his phenomenal generosity.

His good works reached far beyond Cleveland. With a special place in his big heart for the sanctity of Kever Rochel, Reb Mendy invested huge sums of money to finance the site’s renovation. In tribute to his contributions, his levayah started at Kever Rochel before being brought to Yeshivas Kamenitz for hespeidim, followed by kevurah on Har Hamenuchos.

On an individual level and on the community level, Reb Mendy was particularly sensitive to the most vulnerable members of Klal Yisrael, leading him to be one of the leading supporters of Amudim, an organization dedicated to helping victims of abuse and those struggling with addiction.

Both in Cleveland and on the national level, he had become an involved member and major supporter of the Agudath Israel of America and had been slated to be honored at the organization’s upcoming dinner at the end of the month.

“He was a real embodiment of b’makom she’ein anashim, hishtadel l’hiyos ish. When he saw a need he jumped in and was very passionate about the causes he put himself into,” said Rabbi Chaim Dovid Zwiebel, executive vice president of the Agudah. “He was not tied by the bounds of diplomacy. And when he saw something that bothered him he spoke his mind and looked for ways to help. … It all came from a passionate heart that was filled with real ahavas Yisrael.”

Menachem Moshe Klein was born in Budapest, Hungary, in 1952. Both of his parents had survived Auschwitz and the family moved to the United States shortly after Mendy’s birth.

The Kleins were part of what was then the small but growing Satmar community. Reb Mendy attended the Satmar cheder and would fondly recall his memories of watching the Satmar Rebbe, zy”a, daven on the Yamim Nora’im.

Before his bar mitzvah, he went to study in the yeshivah of the Tosher Rebbe, zy”a, and for several years served as one of the Rebbe’s hoiz bachurim. Reb Mendy retained a close relationship with the Rebbe for decades afterward.

Reb Mendy married, tbl”c, Ita Fried in the early 1970s. From the times of his very humble beginnings to the recent decades as a renowned philanthropist, she was a true eishes chayil and full partner, standing loyally at his side supporting his many and varied endeavors.

For many years of his adult life, Reb Mendy was far from the wealthy man he would become. The family moved to Cleveland in the early 1980s, where for several years, he struggled to make a living. When he approached the founding Menahel of the Hebrew Academy of Cleveland, Harav Nochum Zev Dessler, zt”l, to enroll his children in the school, Reb Mendy said that he was not able to pay tuition at the time, but assured him that he would pay back the debt one day. Rabbi Dessler accepted the Kleins. Neither of them could have imagined the extent to which Reb Mendy’s promise would come true.

In 1990, he acquired a small business that would become Safeguard Properties, a company that deals with default property preservation. Within a few years, the endeavor became increasingly successful, growing to become the nation’s largest private company of its kind and expanded into several related but independent companies under Reb Mendy’s ownership.

As his fortunes quickly improved, Reb Mendy sought an ever-growing list of opportunities to help the Cleveland kehillah and the klal at large, supporting an endless list of Torah and chessed projects, as well as being a reliable source of help for individuals in need. Giving not only of his money, but also of his time, he felt truly charged with a holy mission to use his abilities for the good of the klal.

“The fact that he had suffered made his heart so open and so generous that he was constantly searching for ways to do more and to help more people,” Rabbi Zev Busel, Rosh Kollel, Ateres Nochem Zev, under the auspices of the Hebrew Academy, told Hamodia.

Rabbi Busel, who heads the several kollelim supported by Reb Mendy, said that he never lost his appreciation for those who helped him fulfill his plans for the klal, even when it was at his own expense.

“Each time a new yungerman came to the kollel, when they met [Reb Mendy], their instinct was always to thank him, but he would always tell them, ‘No, it’s me who has to thank you,’” he said.

Despite the affluence and prominence that Reb Mendy achieved, those who knew him said he remained as humble and approachable as when he was in dire financial straits and he went out of his way to remind himself of those early days.

When Harav Nochem Zev Dessler was niftar in 2011, those who arrived at the levayah early saw Reb Mendy setting up chairs together with a group of other volunteers.

“He was a very regular, everyday person; he never lost that,” Rabbi Yitz Frank, Ohio director for Agudath Israel, told Hamodia. “A lot of his close friends were far from well-to-do, but you could talk to him like you could to anyone else.”

Rabbi Frank worked closely with Reb Mendy on a long list of projects on behalf of the community and said that he seemed tireless, often sending emails on minute details of their advocacy endeavors and klal projects at 3:00 a.m.

After Reb Mendy had stepped in to assume the bulk of financial responsibility for the Telshe Yeshivah, he received a brachah from Harav Chaim Stein, zt”l, that he should have “arichas yamim,” literally translated long days. Reb Mendy often spoke of the brachah and in talking with Hamodia, Rav Elya Brudny recalled what he had said regarding the matter in his hesped in Cleveland.

He began by quoting an oft-repeated story that when the Sfas Emes was niftar at age 58, his son the Imrei Emes said that his father had “arichas yamim,” and when questioned on that statement, explained that the term does not mean living to old age, but rather to fill one’s days to the utmost with worthy endeavors.

“Reb Mendy spent every waking moment dedicated to doing what he could for other people and after Rav Chaim’s brachah he became an incredible matzdik es harabim,” said Rav Brudny. “What he accomplished in the last 10 years is unbelievable and who can imagine what his Olam Haba is? It is a mitzvah to publicize that that’s the real arichas yamim.”

Reb Mendy is survived by, ybl”c, his wife, Mrs. Ita Klein; sons, Reb Yoni and Reb Nati; daughters, Mrs. Edna Jaffa and Mrs. Dina Halpern, as well as by grandchildren and one great-grandchild.