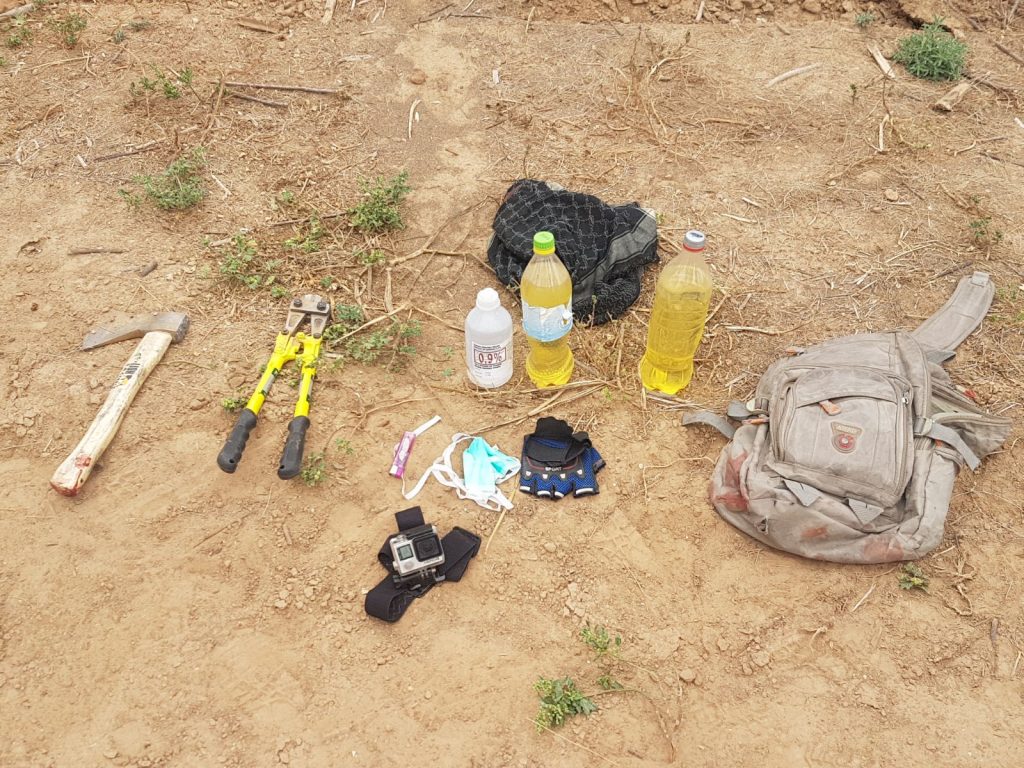 B’chasdei Shamayim, Israeli soldiers thwarted an attempt by Gaza Arabs to breach the Gaza border fence and infiltrate Israel, the military said Sunday in a statement.

A statement by the IDF said that troops fired toward four terrorists who tried to cross the border fence in the southern Gaza Strip, enter Israeli territory and damage what it described as “security infrastructure” near the fence. Three of the terrorists were killed, said the IDF.

A bag that was found on one of the terrorists contained a camera, an axe, an oxygen mask, a cutter and gloves. Two petrol tanks were found next to another terrorist.

Attempts by Gazans to enter Israel have spiked in recent weeks during the ‘Great March of Return’ protests.

Israel says that it is defending its sovereign border, including nearby communities, and that its troops target only instigators. Israel accuses Hamas, which is sworn to Israel’s destruction, of trying to carry out attacks under the guise of the mass protests.

Earlier Sunday, the Hamas terror group said it is vowing revenge after blaming Israel for an explosion that killed six of its terrorists. The blast took place in Deir al-Balah, a city located in the central Gaza Strip.

Hamas, which rules Gaza, said Sunday that Israel “will pay a heavy price” for the explosion the night before.

Gaza media initially reported the blast as a “work accident,” implying the terrorists were killed while producing or handling explosives.

But Hamas now says the terrorists, including two commanders, were killed “dismantling booby-trapped spying equipment planted by Israel during the past decade in Gaza.” It did not elaborate or provide any evidence.

Six people were killed and three others were wounded in the explosion, the Hamas-run Health Ministry said.  The cause of the blast was not immediately clear.

The wounded and the bodies of the dead were brought to a hospital. The Health Ministry identified the dead as Taher Shahin, 29, Wissam Abu Mahrouk, 37, Musa Salman, 30, Mahmoud al-Ustaz, 34, Mahmoud al-Touashi, 27 and Mahmoud al-Qishawi, 27.

A Palestinian source told Haaretz that all signs pointed to an explosion resulting from the handling of explosives inside a building and that there were signs that the casualties were operatives in the Izz ad-Din al-Qassam Brigades, Hamas’ military wing.

One report said that the blast occurred during an attempt to defuse a missile or dud that failed to explode during 2014’s Operation Protective Edge.

Hamas’ military wing however blamed Israel in a statement and said a “heinous crime has been committed against our fighters.”

The IDF denied involvement in the explosion. “The IDF is not involved in this incident in any way,” an IDF spokesman said.