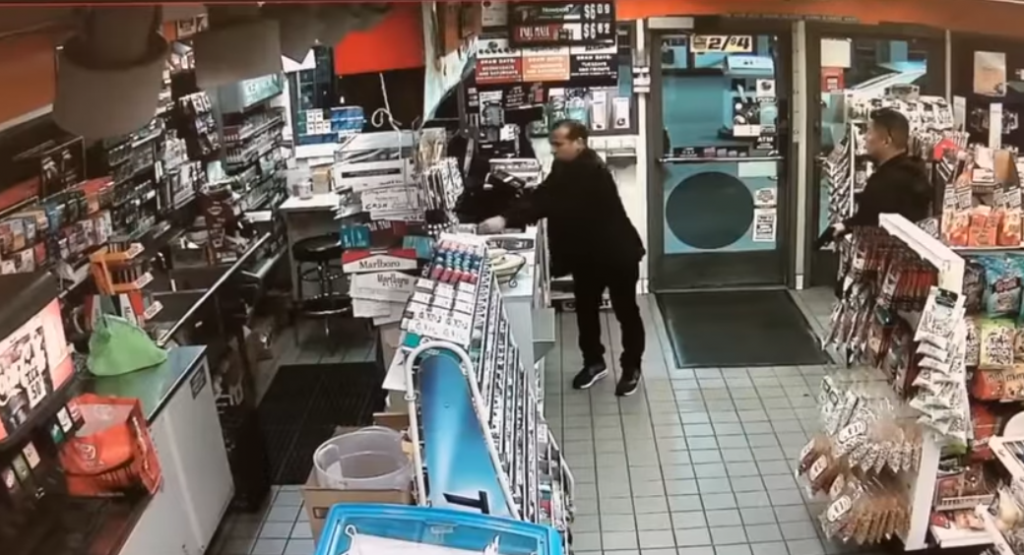 For a moment, after the off-duty officer produced his pistol, Jose Arreola considered how he might die over a $1.19 pack of Mentos.

Arreola had already paid for the mints in an Orange County, California, gas station March 16 and slid them into his pocket. The officer behind him, clad in black shorts and a sweatshirt, appears to think he sees a crime in progress.

The officer reaches for his semiautomatic pistol, and in a quick action, pulls back the pistol slide to chamber a round, a video shows. “Give that back … police officer,” he tells a stunned Arreola.

Recounting the event later to The Orange County Register, Arreola envisioned how the next few moments could unfold.

“I thought my wife could be a widow after tonight,” Arreola, 49, told the newspaper about his encounter with the Buena Park police officer.

The encounter, which Buena Park Police Chief Corey Sianez called “disturbing,” had already triggered an administrative investigation, he said in a statement on social media Friday.

“I can definitely assure you that our investigation will be thorough, and if the officer is found to be in violation of any policies and procedures, he will be held accountable,” Sianez said.

In the surveillance video that appears to be recently released, Arreola is seen asking for the price of the mints, then hands over cash to the attendant before pocketing the mints in his jacket.

That is all it took for the officer to take action and demand that Arreola place the mints back on the counter.

“Oh!” Arreola says, shaken. “I paid for this,” he says several times. At one point, his face is stunned as he looks to the attendant for help.

After holding his pistol out for eight seconds, the officer appears to put the pistol back into his pocket. “Try stealing that again. Get your cash and leave,” the officer warns.

As Arreola panics and steps out of the way, the officer directs his attention to the cashier: “Did he pay for this?” The cashier answers yes. The officer asks if he is sure. He offers the same reply: Yes.

“My apologies, sir,” the officer tells Arreola. “My apologies.” Arreola is seen collecting the rest of his change and quickly makes his way toward the exit.

In the statement, Sianez says the video clearly shows the officer drawing his gun “but not pointing it” at Arreola, though his assertion is unclear from the video. In a split-second, the officer appears to raise his weapon toward Arreola, then quickly lowers it for the rest of the encounter. His index finger is clearly extended and not on the trigger.

The department did not immediately return comment asking whether the officer is back on duty, or if the department stands by the statement that his weapon was not pointed at Arreola.

It was not clear why the video of the incident, which took place more than seven weeks ago, has only recently surfaced. Arreola has retained an attorney and seeks damages from the police department.

The incident has left him shaken, he told The Register.