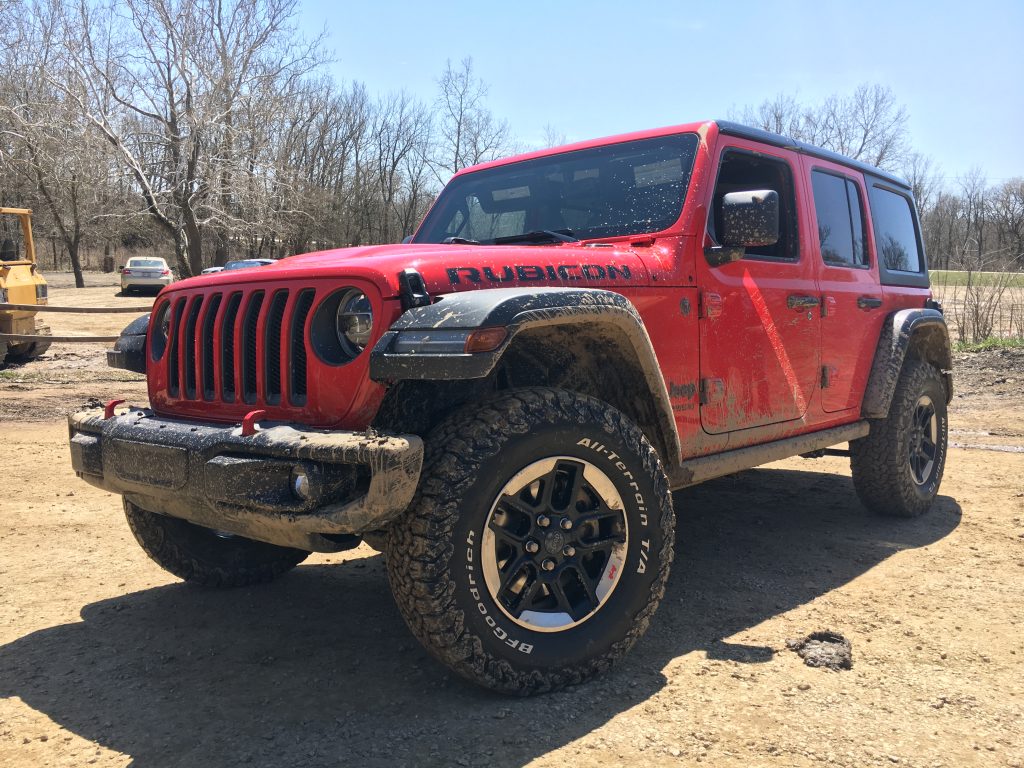 If some days are better than others, a day off-roading in a Jeep Wrangler is great. Add some insane terrain, the season’s first sunshine, the muddy muck following a Midwestern winter that wouldn’t quit and the only thing clearer than this overdue sunny day was why the 2018 Jeep Wrangler Rubicon is one of the most capable off-road vehicles in the world.

Redesigned for the first time in a decade, the 2018 Wrangler JL builds on 77 years of history to make the American icon more accessible to a global audience who want on-road convenience as much as off-road capability. It’s working; the brand had a record March, led by a record number of Wranglers sold.

Exterior changes are subtle but significant, including a more raked seven-slotted grille and rounded angles on the roof and hood for improved aerodynamics. The four-door is nearly 4 inches longer and 2.4 inches wider, though the use of lightweight aluminum sheds 200 pounds. Its front doors went on a diet, dropping 17 pounds (down to about 45) so one person can more easily take them off.

Three new powertrains also usher the Wrangler into a more fuel-efficient era, including a 2-liter turbocharged four-cylinder mild hybrid with a 48-volt battery. Don’t worry, purists: the 270-horsepower turbo with the new eight-speed automatic churns out 295-pound-feet of torque, which is better than the 260 pound-feet of torque in the returning V-6 Pentastar engine. The Pentastar has start/stop technology to conserve fuel while idling, helping it get 20 mpg combined, which is 2 mpg better than its predecessor. A diesel V-6 is due in 2019.

Everything about the new Wrangler is more efficient, including the time it takes to transition the all-weather all-terrain SUV into a summer beach crawler. The front windshield folds down with four bolts instead of 28 on the outgoing JK model, so it’ll only take a half hour instead of half a day to get wind in your face and bugs in your teeth. There are too many roof combinations to count, but highlights include the three-piece Freedom hard top ($1,095) with two distinct panels over the driver and passenger. Flip the four latches and pop it off in seconds so a bald driver can stay covered while a sunbathing passenger can get baked. The Sky One-Touch ($3,995) soft top retreats by the push of a button in 18 seconds at vehicle speeds up to 60 mph.

Despite such creature comforts, including a customizable info cluster, soft-touch trim, push-button starter, 8.4-inch touch screen with Uconnect (one of the better infotainment systems on the market) with Apple CarPlay or Android Auto, and over 75 advanced driver assistance systems, the Wrangler JL is at heart a mind-blowing beast in all terrain.

We followed the pros from Jeep Jamboree in the redesigned 2018 Wrangler Rubicon four-door up hills, down dales, through creeks, over rocks, articulating, crawling, crabbing, scrambling, fording, bouldering, and otherwise overcoming The Cliffs Insane Terrain Off-Road Park in Marseilles, Ill.

New for 2018, Rubicon comes with 33-inch tires (instead of 32-inch tires in the outgoing model), and the fenders are raised to fit 35-inch tires without needing a lift. Those tires, along with a ground clearance of 10.9 inches, let us drive through a swift-but-shallow spring creek strewn with rocks. It wasn’t nearly as deep as the 30 inches of water passable in the new Wrangler, according to Jeep. The crossing was more a cleaning of the four skid plates about to get used and abused.

We splashed through giant standing puddles before our roughly 30-degree ascent up a deeply rutted slope banked by trees.

Thanks to Rubicon’s carryover Rock-Trac system and new electronically disconnecting sway bar, we clambered in and out of those ruts, spitting mud on the Jeep behind us in what felt like nothing more than a broad-shouldered shrug. The sway bar is important for two reasons: It’s so much easier to push a button than to disconnect it yourself, and it limits body roll when on the road.

Next came the boulders and rocks. As cool as it was to conquer behind the wheel, it was even more impressive to witness from the outside how each wheel did its own thing. Staying in 4-Low provides a 4:1 crawl ratio, which is a sweet spot of rock-crawling capability in the off-road world. Adding front and rear locking differentials, Rubicon crawls like a spider, each wheel working independently to maximize grip and get purchase over the next obstacle.

But tires and driver ability make a difference, lest it be mistaken that anyone can hop into a Jeep and blaze their own path. One driver new to such off-road muck got stuck in a Sahara with all-season tires. Another Jeep with a winch and some pros with a clever pulley system got it free, though, and we were back on track.

The Rubicon V-6 with the eight-speed automatic ($2,000) was easy to operate, but the standard six-speed manual just felt right. Given the technical difficulty of the 20-minute loop, there was some apprehension shifting gears while mucking about. But in 4L, there isn’t much need to grind ‘em till you find ‘em. We used third on the flatter spots at 10 mph, and waited in first for the caravan to catch up, but for the creek crossings, bouldering and ascents, we stayed in second. Crawling at 2 mph can be done in second gear without pressing the clutch. Having the shifter in hand and both feet on the pedals while scrambling over land feels right, all tactile and tough, as if you’re doing some of the work. But you’re not, not really. It’s all Jeep, all the time, as it’s been for over three quarters of a century.