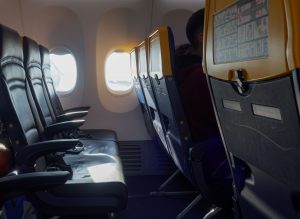 Minimum standards for ever-shrinking airplane seat sizes. A ban on airlines bumping ticketed passengers who have already boarded an aircraft. A prohibition on in-flight voice calls, including those made over wi-fi.

Those are just a few changes air travelers might notice if a Federal Aviation Administration reauthorization bill recently approved in the House ends up becoming law.

The must-pass legislation, which won overwhelming bipartisan support, is still a ways from President Donald Trump’s desk. The Senate is expected to take up its own version in the coming weeks, meaning that the two bills will have to be reconciled.

The far-reaching measure, closely watched by national air carriers, is probably most notable for what isn’t in it.

Rep. Bill Shuster, the House Transportation Committee chairman, dropped a contentious idea to privatize the nation’s air traffic control system. Another proposal pushed by some other GOPers to increase the cap on a passenger fee used to fund airport infrastructure also didn’t get included.

But the multibillion-dollar package would give stability to the FAA after years of stopgap measures. It would also enact all manner of aviation-related changes, including many that would affect fliers traveling through DFW International Airport or Dallas Love Field.

Here’s a look at five key areas of the House’s FAA reauthorization bill:

New airplane seat standards may or may not end up being that cushy.

The bill would require the FAA, within a year, to issue rules to “establish minimum dimensions” for seat pitch, length and width. But it doesn’t say what those standards should be. And anyone who’s flown recently knows that airlines are eager to cram more and more seats on their planes.

Other consumer provisions would be more direct.

The ban on all in-flight wireless calls would bolster a Federal Communications Commission rule that bars calls made on cell networks. The anti-bumping provision would help prevent the brouhaha that happened when a passenger was dragged off a United Airlines flight last year.

Flight attendants would be required to take 10 hours of rest between flights, putting them on par with the flight deck. That was a change requested by some lawmakers and flight attendant groups, who’ve noted the challenge that fatigue can present in the aircraft cabin.

The FAA would be required to review standards for cabin evacuations.

Fliers are supposed to get off a plane within 90 seconds in an emergency situation. Some stakeholders have questioned if that’s really feasible, in part because more seats on the plane means more passengers have to figure out how to navigate toward the exits.

The agency would also have to study engine safety in the wake of the fatal accident that occurred last month on a Southwest flight.

Airlines would once again be able to advertise fares without including taxes.

The change would come with a caveat: Airlines would have to disclose the tax amount via an online link or popup. But it would still effectively overturn a U.S. Transportation Department rule that was cheered by consumer advocates and opposed by the airlines.

Those taxes add up, which partly explains the carriers’ ire. A one-way Southwest flight from Dallas to D.C. next month, for instance, is now being advertised at $173, including $33 in taxes.

The U.S. Transportation Department would have to set “minimum standards for what is required for service and emotional support animals carried in aircraft cabins.”

Emotional support animals, also known as comfort pets, have become a major point of contention in the skies, particularly since the existing rules leave plenty of opportunities for passengers to game the system in an attempt to avoid a fee to bring Fido on board.

Some 751,000 comfort pets flew on U.S. airlines last year, an 80 percent increase from the prior year, according to an informal survey by the industry group Airlines for America.