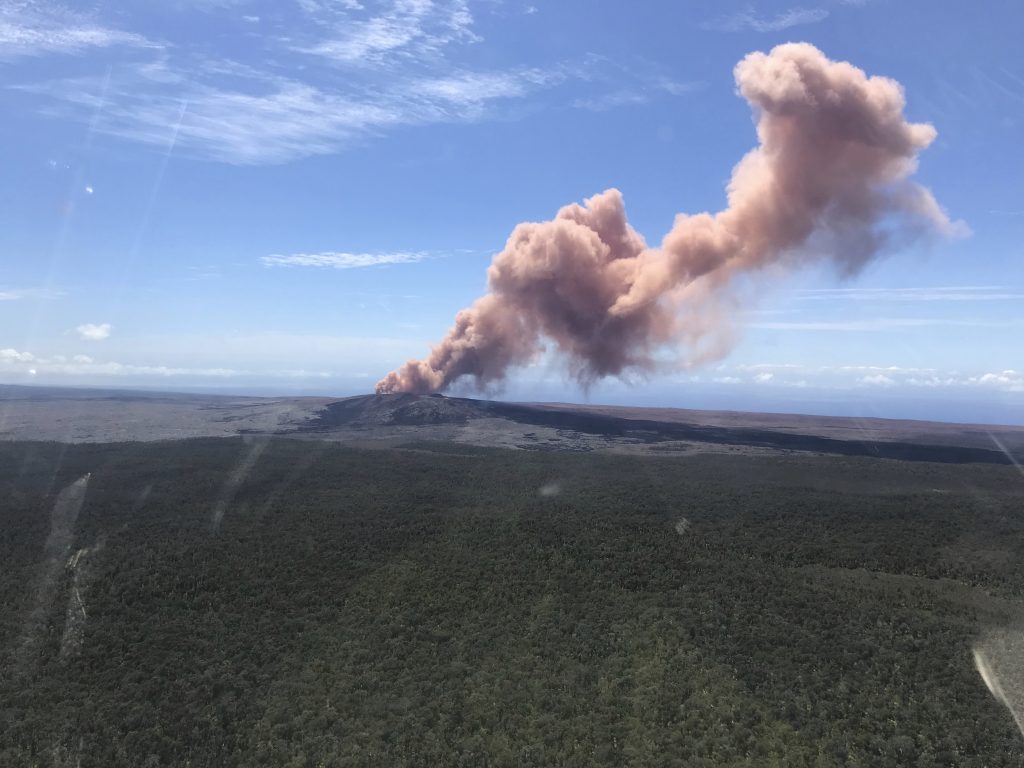 Nearly 1,500 people fled their mountain-side homes after Hawaii’s Kilauea volcano sent molten lava chewing through forests and bubbling up on paved streets in an eruption that one resident described as “a curtain of fire.”

After a week of earthquakes and warnings that an eruption could be imminent, steam and lava poured out of a crack Thursday in the community of Leilani Estates near the town of Pahoa on the Big Island, officials said.

TV footage showed lava spurting into the sky from a crack in a road. Video from an aerial drone showed a line of lava snaking through a forest. The activity continued early Friday, with reports of eruptions from volcanic vents on two streets.

Resident Jeremiah Osuna, who captured the drone footage, described the scene as a curtain of flame roaring through the vegetation.

“It sounded like if you were to put a bunch of rocks into a dryer and turn it on as high as you could. You could just smell sulfur and burning trees and underbrush and stuff,” he told Honolulu TV station KHON.

There were no immediate reports of injuries, but at least 100 people were staying in shelters Friday, with many more evacuees believed to be with relatives and friends.

The Hawaii governor activated the National Guard to help with evacuations and provide security to about 770 structures left empty when residents sought shelter.

Scientists have no way of predicting how long the eruption will continue, said Asta Miklius, a geophysicist with the U.S. Geological Survey’s Hawaiian Volcano Observatory.

A key factor will be whether the magma reservoir at the summit starts to drain in response to the eruption, which has not happened yet, Miklius said.

“There is quite a bit of magma in the system. It won’t be just an hours-long eruption probably, but how long it will last will depend on whether the summit magma reservoir gets involved. And so we are watching that very, very closely.”

County, state and federal officials had been warning residents all week that they should be prepared to evacuate because an eruption would give little warning.

The geological survey on Thursday raised the volcano’s alert level to warning status, the highest possible, meaning a hazardous eruption was imminent, underway or expected.

Henry Calio said the first sign that something might be wrong happened when cracks emerged in the driveway of his home in Leilani Estates. His wife, Stella, then received a call from an official who told them to get out immediately.

The two feared that they might lose their house.

“This is our retirement dream,” Henry Calio said.

Areas downslope of the erupting vents were at risk of being covered by lava. Leilani Estates appeared to be at greatest risk, but scientists said new vents and outbreaks could occur, and it’s impossible to say where.

The eruption came after days of earthquakes rattled the area’s Puna district. A nearby school was closed due to the seismic activity, and several roadways cracked under the strain of the constant temblors. A magnitude 5.0 earthquake was recorded Thursday, hours before the eruption began.

Kilauea’s Puu Oo crater floor began to collapse Monday, triggering a series of earthquakes and pushing the lava into new underground chambers. The collapse caused magma to push more than 10 miles downslope toward the populated southeast coastline of the island.

Kilauea has erupted periodically for decades. Most of its activity has been nonexplosive, but a 1924 eruption spewed ash and 10-ton rocks into the sky, leaving one man dead.

Puu Oo’s 1983 eruption resulted in lava fountains soaring over 1,500 feet high. In the decades since, the lava flow has buried dozens of square miles of land and destroyed many homes.