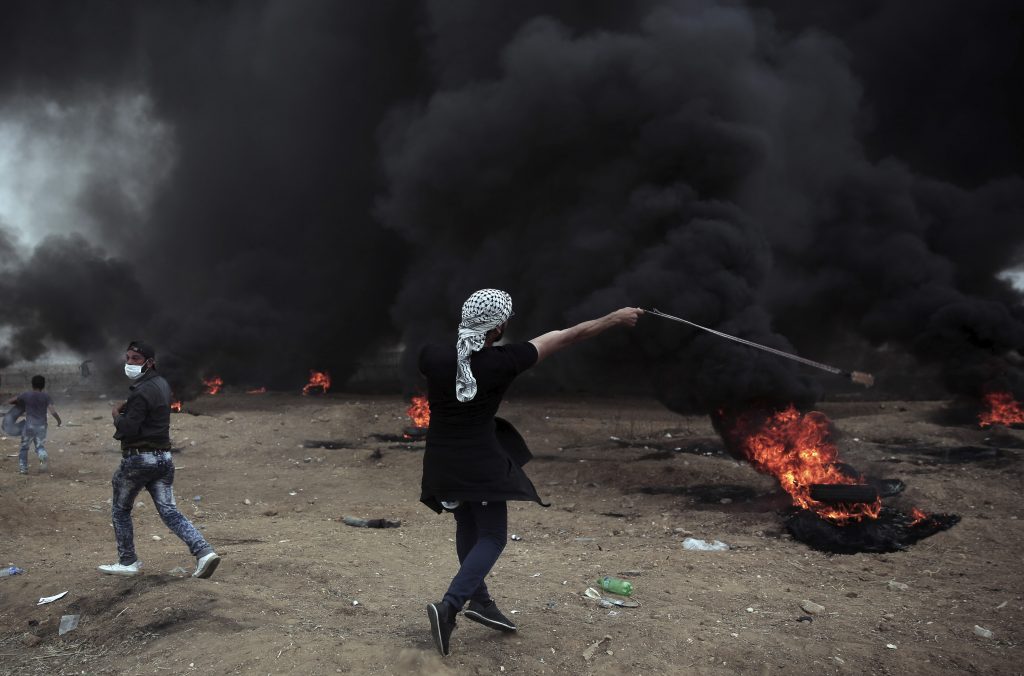 In a new aerial twist, small Israeli drones faced off against Gaza kites with burning rags attached to them, according to witnesses. In recent weeks, Gaza protesters had sent some of these kites across the border as part of a new tactic of setting dry wheat fields on the Israeli side on fire.

On Friday, Israeli drones took down two kites in one location, while stone-throwers with slingshots sent two low-flying drones crashing in another area, witnesses said. The Israeli military said two small surveillance drones fell into Gaza, but did not elaborate.

The military said that in one area, protesters tried to damage the fence and enter Israel, but withdrew when soldiers arrived at the scene. In another location, soldiers warned over loudspeakers that those burning tires would be targeted.

By late Friday afternoon, 148 Palestinians had been wounded, including 42 by live bullets and 20 by rubber-coated steel pellets, Gaza health officials said. Since late March, 39 protesters have been killed and more than 1,700 wounded by Israeli fire.

Gaza’s Hamas rulers, who have organized the Friday protests at the border, have said the protests might culminate in a mass breach of the border fence by May 15.

On Friday, Palestinians assembled after Muslim noon prayers at five protest camps set up several hundred meters from the fence. Some moved closer to the fence, throwing stones with slingshots and burning tires. Israeli soldiers fired live rounds and tear gas. The Israeli military put the turnout at about 7,000.

Yehiyeh Amarin, an 18-year-old protester, was among nearly two-dozen activists rolling tires toward the fence to set them ablaze. His face partially covered with a black-and-white “keffiyeh” scarf, he’s part of a group of young protesters called the “tires.” They are responsible for collecting and burning old tires along the border.

“If no solution happens by May 15 we will continue the protests or we die,” said Amarin, as another protester behind him brandished a yellow wire cutter. “We will cut through the fence.”

He said he and his friends spend their weekdays collecting tires for the weekly protests.

The mounting casualty toll has led to criticism of Israel. Rights groups say Israeli open-fire regulations are unlawful because they permit troops to use potentially lethal force against unarmed protesters. Israel’s Supreme Court is currently weighing a petition by six rights groups to restrict or ban the use of live fire on the border. The European Union and the United Nations have criticized the use of lethal force against the protesters.

Israel says that it’s defending its sovereign border, including nearby communities, and that soldiers only target instigators. It accuses Hamas, sworn to Israel’s destruction, of trying to carry out attacks under the guise of the mass protests. It has said that some of those protesting at the border over the past few weeks tried to damage the border fence or plant explosives along it.

The protests are part of what organizers say is an escalating showdown with Israel, to culminate in a mass march on May 15 — the day Palestinians commemorate their mass uprooting in the 1948 war over Israel’s creation.

Hamas says the protests are aimed at breaking the border blockade and pressing for the “right of return” of displaced Palestinians and their descendants. The blockade was imposed by Israel and Egypt after Hamas seized Gaza in 2007, a year after winning Palestinian parliament elections.

Hamas officials have given conflicting statements about a possible mass border breach on May 15. Israel has warned that it will prevent such a breach at any cost.