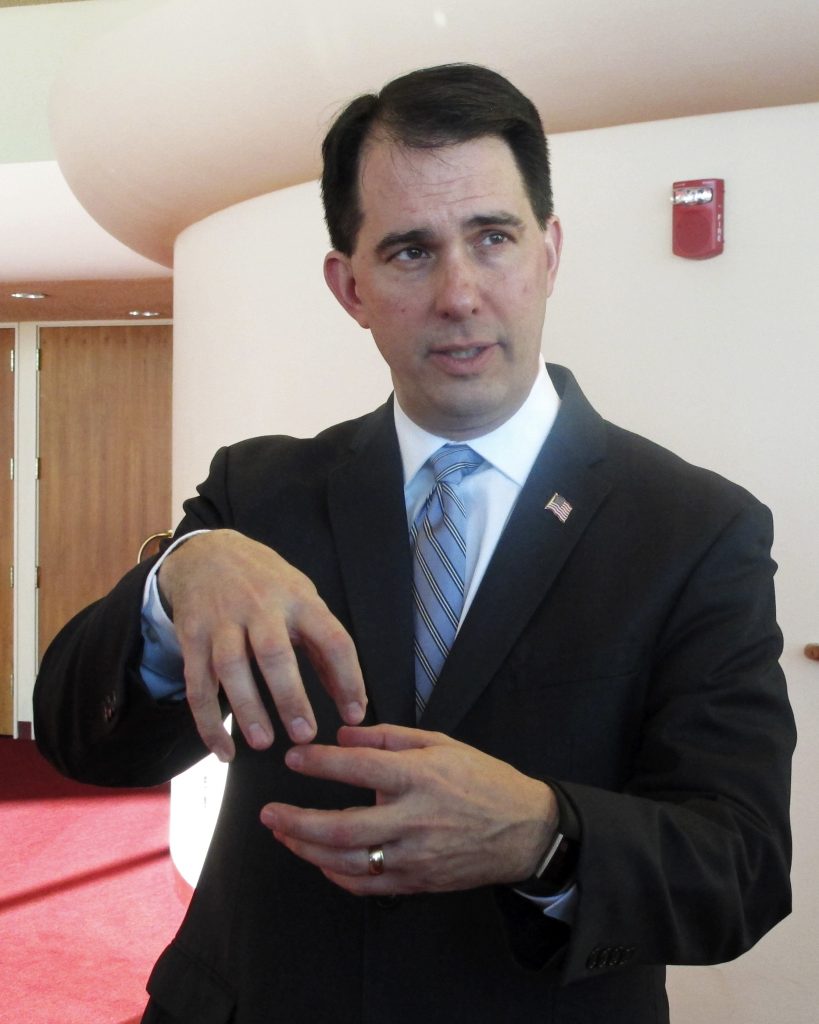 To Republican Gov. Scott Walker, who drove the one-time tax payout into law, it’s a chance to turn a state budget surplus into a bonus for parents who could use some extra cash. To his critics, who note that Walker is a few months away from a tough re-election run, it looks like campaign-year bribery of the up to 671,000 families who could receive checks.

And to independent economists, it’s a mystifying piece of tax policy that has no clear, long-term economic purpose and few, if any, recent comparable examples, given that tax breaks are traditionally incorporated for tax-filing season — not in the months before an election.

“This is really weird. I have never heard of anything like this,” said Richard Auxier, who tracks state tax policy for the Tax Policy Center, a nonpartisan think tank.

Scott Drenkard, a tax expert at the Tax Foundation, a right-leaning think tank, was also puzzled. “This is definitely odd and unique. I haven’t seen anything like it before,” he said. “It’s political catnip, but it’s hard to see how it improves economic outcomes.”

Walker says his universal child tax credit, to be paid out of a state budget surplus, reflects years of prudent fiscal stewardship since his ascension to the governor’s mansion in 2011, and offers meaningful relief for cash-strapped families. Families can sign up to have their checks mailed to their homes or deposited directly into their bank accounts.

“A couple hundred dollars more in the family budget could really make a difference, particularly when getting ready for the next school year,” Walker said in a news release. “We are giving this money back to the hard-working taxpayers because it is their money to begin with.”

To critics, Walker’s tax break looks like a brazen publicity stunt by a vulnerable incumbent, at a time where Democrats appear to hold the political momentum. “It’s literally a guy saying, ‘I’m Scott Walker running for re-election, have some money!,'” said Mandela Barnes, a Democratic candidate for lieutenant governor in the state. “Everyone I’ve talked to sees it as a blatant payoff.”

The tax credit is expected to cost about $122 million, as an estimated 671,000 families and their 1.22 million children in the state qualify for the program.

The legislation also created a “back to school” sales-tax holiday, waiving the state’s five percent sales tax for the first five days in August on some purchases of school supplies, clothing and computers.

Walker’s approval ratings have held relatively steady, but the governor has warned that a “blue wave” fueled by greater liberal enthusiasm could crash over the state GOP this fall.

“Tonight’s results show that we are at risk of a #bluewave in [Wisconsin],” Walker tweeted on April 3, after a liberal won a Wisconsin state Supreme Court seat. On Jan. 17, after a Democrat won a state senate race, Walker wrote: “WAKE UP CALL: Can’t presume that voters know we are getting positive things done in Wisconsin.”

Walker’s tax break is notably unlike the Republican tax law that passed Congress this fall. The proponents of that overhaul say it has increased take-home pay by changing withholdings, but acknowledge that taxpayers might not notice it until they file their returns in April 2019, months after Republican lawmakers face voters in the midterm elections this fall.

By contrast, Wisconsin families can sign up to claim Walker’s tax cut, starting May 15, and have until July 2 to do so. The state has set up a separate website, advertising the program and Walker’s role in advancing the credit. Had Walker gone the more conventional route of offering a child tax credit through state income taxes, it would have taken effect in 2019 — after the election.

“Claiming it midyear is a real departure from how we usually interact with the tax system,” said Elaine Maag, another tax expert at the Tax Policy Center. “It’s very difficult to understand the policy rationale here. There’s not some crisis in Wisconsin where people need cash today, as opposed to when they were filing their returns a few months ago.”

Tax experts said that the only similar recent tax break that came to mind was in 2014 when New York Gov. Andrew Cuomo, a Democrat, passed a more targeted, three-year middle-class family cut ahead of his re-election bid, according to Meg Wiehe, a tax expert at the Institute on Taxation and Economic Policy. At the time, Cuomo faced fierce criticism from New York Republicans that he was unfairly manipulating the tax system for partisan ends, since checks were mailed directly to taxpayers that year.

Walker says he has cut state taxes since 2011 by more than $8 billion. Unemployment in the state has dipped below 3 percent amid strong business investment. But Democrats say the state’s rainy-day fund remains depleted, and that the governor has done little to alleviate income inequality or poverty.

Walker’s office noted that three Democrats, including a state senator, voted for the legislation, which passed the state Senate on a 17-15 vote. “Returning surpluses to taxpayer is what the governor has stated he would do, and he is doing it,” said Amy Hasenberg, a spokeswoman for Walker. “The opposition has politicized what was a bipartisan vote for returning the surplus to taxpayers.”

State Rep. Jason Fields, a Democrat who represents a part of Milwaukee, said he voted for the package because his constituents could use the extra money from the state. He said he thought Walker’s opponents should not overestimate the potential impact of the measure on the election.

“Nobody will vote or not vote for the governor over $100,” Fields said.