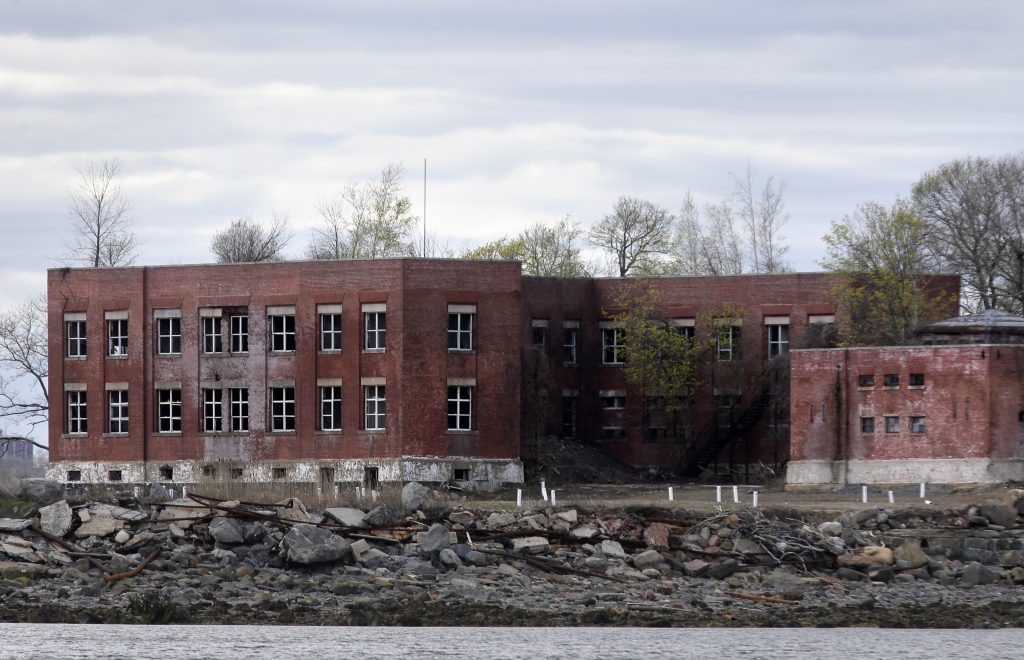 Storms and the tides are unearthing the long-hidden bones of Hart Island, creating eerie scenes of skulls, femurs and collarbones on this sliver of land where New York City’s destitute dead have for 150 years been sent off to be unceremoniously buried and forgotten.

After photos of exposed bones began turning up in news reports, forensic anthropologists from the city medical examiner’s office went out last week and collected 174 human bones that they carefully cataloged. Small red flags dotted spots along the rocky shoreline where some remains were found.

“When I hear about the erosion, I always think, ‘Are the bones his? Could any of them be his?’ ” asked Carol DiMedio whose grandfather Luigi Roma was buried on the island after dying from tuberculosis in 1933.

Advocates for Hart Island say the bones are a jarring sign that it’s long past time for improvements to be made. In addition to stepping up a $13.2 million federal project to repair erosion caused by 2012’s Hurricane Sandy and other storms, they want the 101-acre island in the Long Island Sound to be turned into a park and historic site, even if it continues to be used as a burial ground for the city’s poor and nameless dead.

“These are New Yorkers,” City Council member Mark Levine said of the remains. “These are human beings who were largely marginalized and forgotten in life, they were people who died homeless or destitute, victims of contagious disease. And we’re victimizing them again in their final resting place.”

As many as 1 million souls lie buried on Hart Island, purchased by the city in 1868 as land for a workhouse for wayward boys and a potter’s field. Over the decades, it housed a Civil War prison, an asylum, a tuberculosis hospital, a jail and a missile base. All the while, New York continued ferrying bodies there that went unclaimed at the city morgue.

The island, managed by the city’s Department of Correction for more than a century, has never been kept up like a traditional cemetery with manicured lawns or even headstones.

Prisoners dig the long trenches used to bury the dead. Adults go into the ground in pine boxes, stacked on top of one another. Babies are placed in shoebox-sized containers. Around 1,000 people are buried there each year.

The internments take place out of public view and access to the island is limited to trips, once per month, that must be reserved in advance. Only people with loved ones buried on the island are allowed to visit the graves. Others are restricted to a visitors’ gazebo near the ferry dock.

In 2012, one of the island’s embankments was stripped of earth by Sandy’s floodwaters, exposing a Civil War-era cistern. Meanwhile, more storms have battered the island, further eroding it. Work on the federal project to repair the erosion wasn’t scheduled to begin until 2020 but it has been moved up a year.

“We are doing everything we can to limit future exposures and expedite the firming up of the shoreline,” said Jason Kersten, a correction spokesman.

In the meantime, city officials say an archaeologist will visit at least once a month to remove and bury any exposed remains.

Unearthed remains have been a problem before. A March 1985 report by the city’s sanitation department found bones strewn on the island — including a skull on the beach.

“It was explained to us that this was a rather common thing since the city has been burying bodies there for almost 80 years and the water has caused some erosion at older burial spots,” according to the report obtained by island advocate Melinda Hunt.

On a recent photography trip around the island on a chartered boat, Hunt pointed out the places along the northern shore where the bones were, and where she has seen them before.

“They came to clean this up, but it isn’t the first time and it won’t be the last,” said Hunt, creator of the Hart Island Project , who has been documenting conditions on the island since 1991.

DiMedio, 61, said she wishes the uncovered bones would be tested for DNA evidence in order to help other families locate missing loved ones.

She had done research since she was a young girl to try to find out where her grandfather was buried. And when she finally found the answer, she didn’t want to tell her ailing, elderly mother where her father had been laid to rest.

“When I found him … I lied and I said he was buried in a beautiful place, with blue water and blue skies and lots of trees and green grass and seagulls above,” DiMedio said. “I didn’t have the heart to tell her there’s this grim place called Hart Island.”