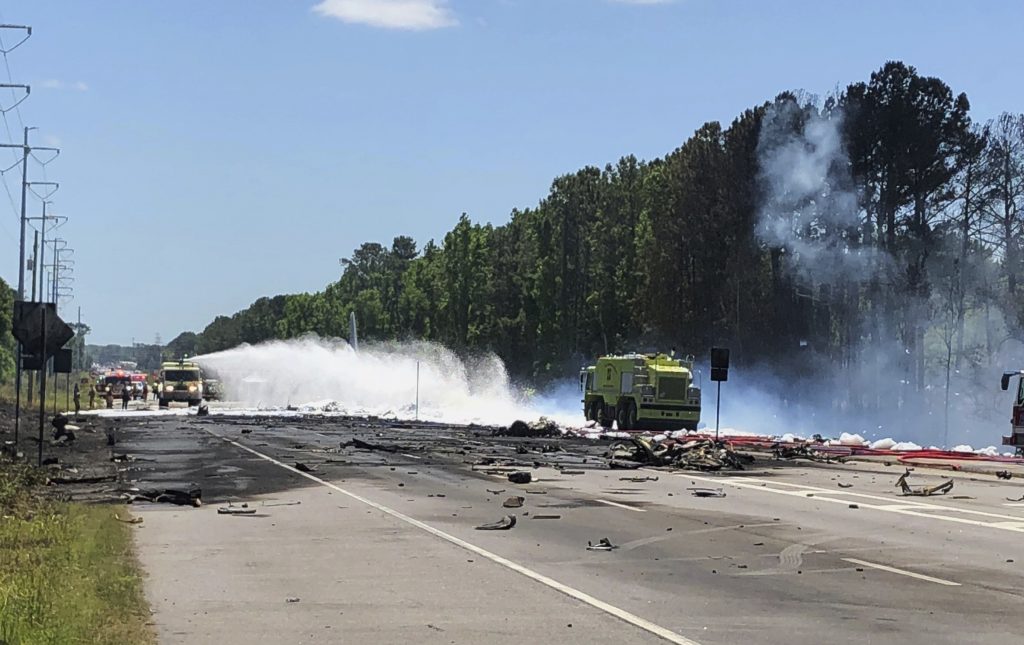 An Air National Guard C-130 cargo plane crashed onto a busy highway moments after taking off from an airport in Georgia on Wednesday, narrowly missing people on the ground but killing at least five National Guard members from Puerto Rico.

An orange and black fireball rose into the sky after the plane crashed onto state highway 21, about a mile from the Savannah/Hilton Head International Airport, around 11:30 a.m., authorities said.

The huge plane’s fuselage appeared to have struck the median, and pieces of its wings, which spanned 132 feet were scattered across lanes in both directions. The only part still intact was the tail section, said Chris Hanks, a spokesman for the Savannah Professional Firefighters Association.

“It miraculously did not hit any cars, any homes,” Effingham County Sheriff’s spokeswoman Gena Bilbo said. “This is a very busy roadway.”

Motorist Mark Jones told the Savannah Morning News that he saw the plane hit the road right in front of him.

“It didn’t look like it nosedived, but it almost looked like it stalled and just went almost flat right there in the middle of the highway,” Jones said, describing how people stopped and got out of their cars following the explosion.

“I’m still shook up and shaking. My stomach is in knots because I know they’re people just like me. I wasn’t that far from it and I could have just kept going and it would have been me and we wouldn’t be talking right now,” Jones said.

Initial information indicated five to nine people were aboard, Puerto Rico National Guard spokesman Maj. Paul Dahlen told The Associated Press. All were Puerto Ricans, and the plane belonged to the 156th Air Wing, on a mission to Arizona. Dahlen did not have details on the mission.

The cause wasn’t immediately clear; firefighters were still working to make the site safe for investigators, said Senior Master Sgt. Roger Parsons of the Georgia Air National Guard. “Any information about what caused this or any facts about the aircraft will come out in the investigation,” he said.

The U.S. territory’s Gov. Ricardo Rossello expressed his sadness, tweeting that “our prayers are with the families of the Puerto Rican crew.”

President Donald Trump tweeted that he had been briefed on the crash, and sent “thoughts and prayers for the victims, their families and the great men and women of the National Guard.”

The airport said on social media that some flights were affected even though the crash happened off its property, and advised passengers to check with airlines for updates.