Israel ANALYSIS: The Success in Exposing Iran’s Secrets Is Part of the Battle to Annul the Agreement
Israel 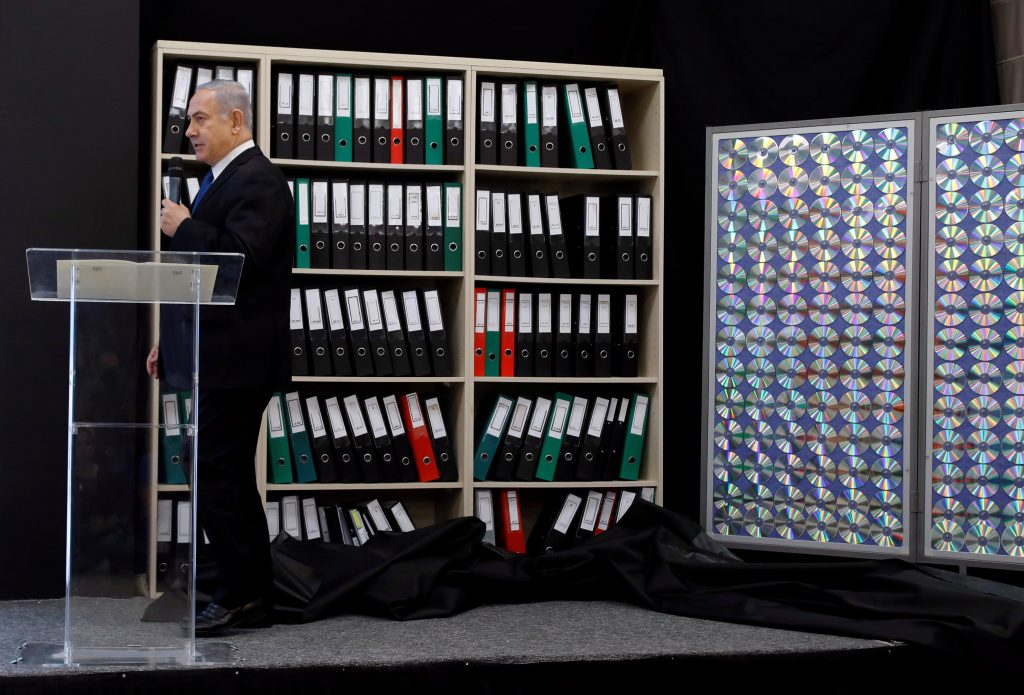 Prime Minister Binyamin Netanyahu and the Security Cabinet that convened on Monday for an emergency meeting notched a significant tactical achievement when they exposed to the entire world that the dealings with Iran are based on lies, and that the Iranians are misleading everyone involved.

Israel’s intelligent achievement – in which they accessed the secret information databases of the entire Iranian nuclear project — will be discussed for years to come. The question was whether to allow the information that has accumulated in Israel to remain the domain of just a few, or to find the right time and to publicize it among the world’s leaders, especially of countries who have the ability to decide whether the agreement will remain intact or not.

This has already put Teheran in an embarrassing position, as it is clear that it lied to the entire world about its actions. It happened on the eve of President Trump’s decision whether to extend the agreement, and also brings the Europeans and other Iran supporters to rethink whether siding with Iran is a mistake.

In a few days, President Trump will have to decide if his country is remaining in the agreement as it is, withdrawing its signature, or if it is going to launch a process to completely overhaul the deal.

The Europeans, Russians and Chinese have rallied together to pressure the United States to remain in the agreement in its current form. As such, a dramatic development was necessary to bring all the signatories to reconsider.

At this point, Israel decided that this was the time to expose one of its biggest state secrets, in the hope that everyone will understand that the agreement cannot remain as it is. Whether that will happen is not yet clear, but all these countries are now facing a dilemma, that is for sure.

The exposure will strengthen President’s Trump’s intentions to move away from the deal and to demand fundamental changes. The Iranians will refuse, of that there is no doubt. This will bring the United States to completely abandon the deal and the question is what the Europeans will do after Tehran’s greatest secrets have been exposed.

The prime minister’s words on Monday came at the end of a tumultuous day during which Iranian targets built on Syrian army bases were targeted. They were severely damaged, and dozens of Iranian and Syrian military personnel were killed or injured.

What exactly happened, and who exactly carried out the attack, and why they chose to do so right now, and who they want to convey a message to are questions whose answers are still very unclear. The Iranians, Syrians, Hizbullah and many media outlets around the world always have a quick and easy answer to every such incident—they point the finger at Israel. There’s no need to make the effort to find other guilty parties.

But a more in-depth study of what happened at the airport in Damascus and other places that were attacked leads to different conclusions. In recent weeks, the Russians have been attacked by sniper fire, and their air and ground bases in Syria have sustained damage. It is clear that this is not the work of one or more large rebel groups that are active in the Syrian arena, and that the attackers are clearly being aided by very capable outside elements that provide weapons that can be used to carry out high quality, precise and deadly attacks.

Why did the ones who did this take this action? For the simple reason that they are sick of these wars that last many years with no end in sight. The attackers wanted to convey the message to all the sides, chief among them Iran, that they would not agree to Iran’s actions that are maintaining the arena as a warzone when it has long been possible to reach an agreed upon solution. The ones preventing it from happening are the Iranians. This was a very precise attack that alarmed not only President Assad’s army, which was surprised by its intensity, but also the Russians, who are reading the map very well, and the Iranians, which sustained here a major blow. Not only were their people injured, but they are in a much more complicated situation now because they have been marked by all the sides involved as being the primary obstacle for progress towards a resolution.

The attackers had very accurate intelligence information. They knew not only where the Iranians keep their heavy missiles, but also were able to destroy those weapons that were concealed underground. The installations that were attacked are located far from one another, which indicates even more the extent of information and options that the attackers have at their disposal.

There are numerous possibilities as to who did it. The area from which the missiles were fired serve as bases for the Syrian army, working with Shiite militias, and that is where they set out to their missions from. This time, someone preempted them and attacked them in the most unexpected way.

This is also the region where Kurdish forces, supported by the Americans, attack the Turks and Assad’s people. Do the attackers belong to one of these groups? It is certainly possible.

The fact that the attack used medium-range ground-to-ground missile batteries and weapons that can penetrate the ground rules out a few organizations from the list of potential attackers. But there are still a number of entities that could have had a good reason to carry out such an attack.