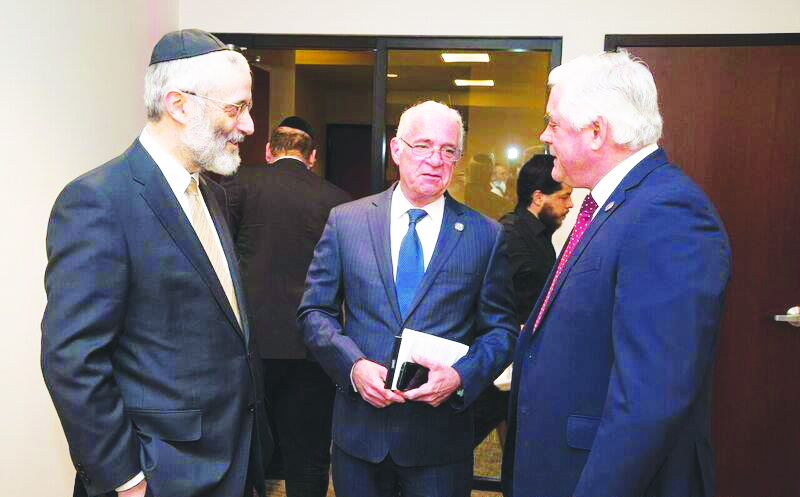 As the Orthodox community’s presence continues to grow in the Garden State, Agudath Israel of America held its first New Jersey legislative breakfast. The event, attended by elected officials, representatives of Jewish institutions, and community advocates, was intended to spotlight the unique needs of the Orthodox populace, particularly regarding school funding.

Speaker Craig Coughlin, who assumed the chair as head of the state’s Assembly this past January, was the event’s guest of honor. His remarks were preceded by a keynote address delivered by Assemblyman Gary Schear of Passaic, who said that rather than focusing on “introducing the speaker to the community,” it was more essential for him to “introduce the community to the speaker.” He opened his remarks by focusing on the central role of Jewish education in Orthodox communities.

“I’ve often been asked by my colleagues, ‘Why should we support parochial schools? Sending there is a matter of a parents’ choice.’

“I did not send my children to yeshivah because there was a choice, nor did anybody else in this room. It’s not a matter of choice; it’s incumbent upon us to send our children to an environment where they will be inculcated with Judaism,” said Assemblyman Schear.

Assemblyman Schear has led several legislative efforts to win financial support from Trenton for non-public schools around the state for services such as nursing, technology, and textbooks. In 2016, he was successful in adding a new line item to the state budget for security funding for private schools and lobbied for increased amounts each year, arguing that the allocations should be commensurate with those allotted for public school students.

“We hope for the growth and expansion of every public school in the state, but want to ensure that students in other schools receive the same essential benefits,” he said. “If there is a message we have to share with the speaker, it is that we deserve no more than any other students, but we also deserve no less.”

Assemblyman Schear, former chairman of the budget committee, pointed out that Governor Phil Murphy’s proposed spending plan for the coming year contains significant cuts in several funding items for non-public schools and pledged to fight to restore them to prior levels.

Agudah’s inaugural New Jersey legislative breakfast was held on Monday morning at the Bell Works business center in Homdel. In addition to a large contingent of leaders from institutions in nearby Lakewood, representatives from communities from throughout the state including Passaic, Englewood, Union City, Deal, Edison, Manalapan, Jersey City, Clifton, and Eatontown were also present.

“We are a community that appreciates the legislative process,” said Rabbi Avi Schnall, director of the Agudah’s New Jersey office. “In this room, 30,000 Orthodox students are represented here today.”

Speaker Coughlin seconded Assemblyman Schear’s desire to restore budget levels for non-public school items to their prior levels, noting the importance of allocations for security.

“Sadly, we recognize that the world is changing, not necessarily in a good way; it’s a threat that most of you have faced for longer than some of us. … It’s a difficult budget … and we need to see if there are new inventive ways to meet the needs we are here to serve,” he said. “It’s important for me to come to understand the needs of different communities and the needs of non-public schools … it’s something that brings communities together.”

Noting the early start time of the event, which began at 8:30 a.m., to accommodate the legislator’s schedules, Rabbi Schnall told Hamodia that the turnout spoke to the Orthodox community’s commitment to public advocacy.

“Having so many people showing up on an early Monday morning is testament to our community’s engagement in the political process and recognizes the need for all of us to be vigilant.”