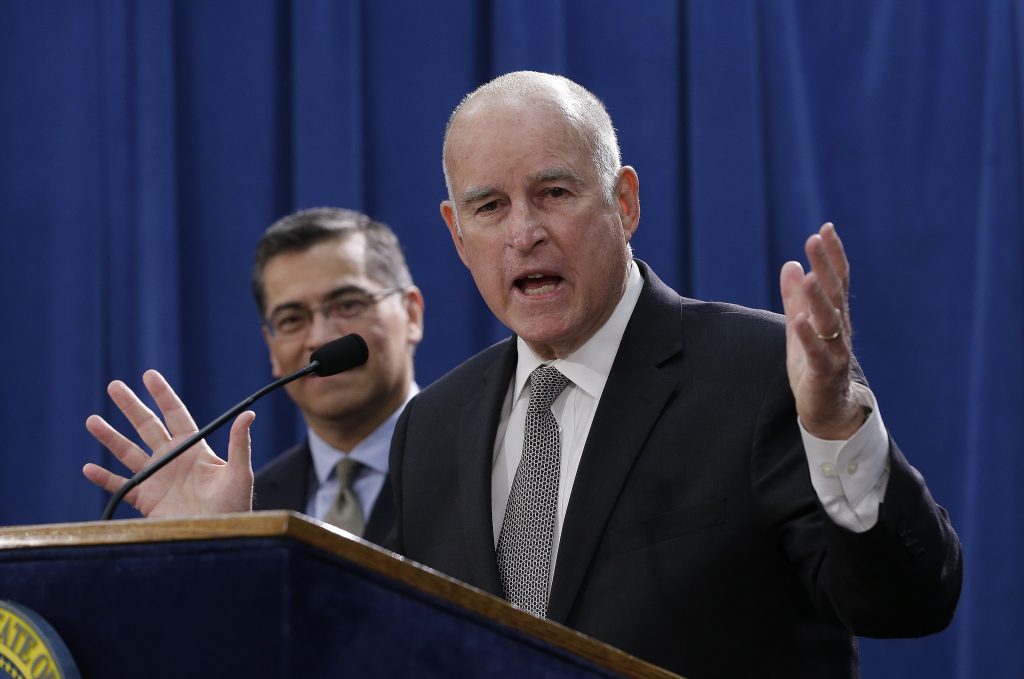 Eighteen states on Tuesday sued President Donald Trump’s administration over its push to “reconsider” greenhouse-gas-emission rules for the nation’s auto fleet, launching a legal battle over one of former President Barack Obama’s most significant efforts to address climate change.

Environmental Protection Agency Administrator Scott Pruitt in April said he would revisit the Obama-era rules, which aim to raise efficiency requirements to about 50 miles per gallon by 2025. Pruitt’s agency said that the standards are “based on outdated information” and that new data suggests “the current standards may be too stringent.”

But in the lawsuit, the states contend the EPA acted “arbitrarily and capriciously” in changing course on the greenhouse-gas regulations.

“This phalanx of states will defend the nation’s clean car standards to boost gas mileage and curb toxic air pollution,” California Gov. Jerry Brown, D, said in a statement announcing the suit, which was filed in the U.S. Court of Appeals for the D.C. Circuit.

The lawsuit comes amid a larger struggle over climate policy regarding U.S. cars and light trucks. The Trump administration has drafted a proposal that would freeze the federal standards at 2021 levels, leaving them well below levels targeted under Obama.

The Trump administration plan, which is not final, would also challenge California’s ability to set its own fuel-efficiency rules.

California has a separate set of standards that, because of its massive car market, have pushed automakers to produce more fuel-efficient vehicles. According to figures from the California New Car Dealers Association, California’s 2,048,000 new car sales in 2017 represented about 12 percent of the 17 million-plus cars sold in the United States last year.

Twelve other states participating in the lawsuit – including New York – have followed California in setting more stringent emission standards. The total market involved is 36 percent of sales in the United States, according to Margo Oge, a former EPA official who helped the agency set auto regulations during the Obama years.

“If you are a car company, that is a pretty big deal. You have uncertainty how this thing is going to work out, and today you have to be investing in cars you’re going to build five years from now,” she said.

The current standards were created under a 2011 agreement reached among the Obama administration, California officials and automakers. If enacted, they would avert 6 billion tons of carbon dioxide emissions from vehicles sold between 2012 and 2025, according to the EPA.

Since the rules were issued, the transportation sector has outstripped electric power to become the top source of greenhouse-gas emissions in the United States.

Congressional Democrats are mobilizing against the administration’s draft plan to weaken the rules.

“I urge you in the strongest possible terms to abandon this extreme and reckless approach, and to put the administration on a more responsible path,” wrote Sen. Thomas Carper, D-Del., in a letter to Pruitt and Transportation Secretary Elaine Chao.

California has been given multiple waivers to set its own, more strict auto emissions standards, including one in 1967.

But the Trump administration is poised to argue that its current efforts conflict with a 1975 law setting up federal fuel economy standards – a contention the state has vowed to fight in court.

Automakers could wind up caught in the middle of a massive legal battle, and they are divided over the Trump administration’s latest actions.

The Auto Alliance, an industry consortium, has said it backs the EPA’s moves, but executives at major automakers have balked at the plans.

“We support increasing clean car standards through 2025 and are not asking for a rollback,” wrote Bill Ford and Jim Hackett, the executive chairman and president and CEO of Ford, last week. A top executive at Honda has also voiced concerns about where EPA is heading.

The auto industry is itself shifting towards selling cars that generate far less emissions. A report last year by Moody’s listed 18 planned or actual battery electric vehicle launches, by 11 manufacturers, between 2016 and 2020.

GM, the nation’s largest automaker, said last October that it planned to launch two new EVs in the coming year and a half and 20 different models by the year 2023.

But even as the industry begins to electrify and sales for other types of green cars, such as hybrids, have grown, there’s another current. Passenger cars as a whole are losing out to bigger luxury SUVs in sales trends, according to Edmunds, which collects information on automobile markets.