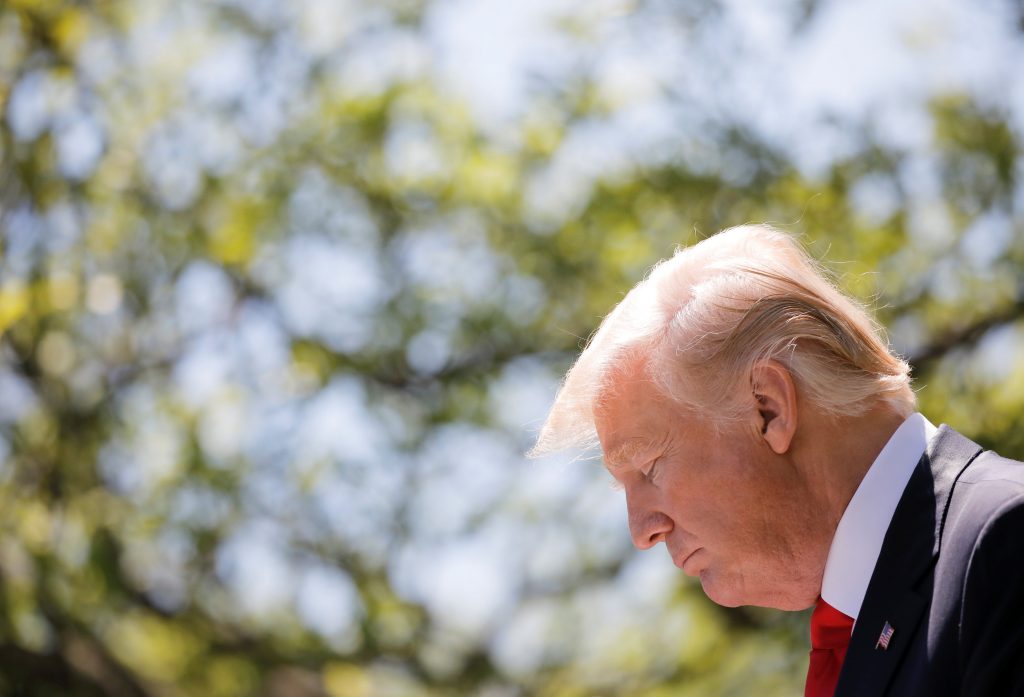 President Trump said that the materials revealed by Israel vindicate his criticism of the Iran deal.

“What’s happening today and what’s happened over the last little while, and what we’ve learned has really shown that I have been 100 percent right,” Trump said.

President Trump called the nuclear deal a “horrible agreement for the United States.”

“That is just not an acceptable situation,” Trump said during a Rose Garden press conference, adding it shows Iran is “not sitting back idly.”

“They’re setting off missiles which they say are for [publicity] purposes,” Trump said. He added: “I don’t think so.”

“So, we’ll see what happens,” Trump said. “I’m not telling you what I’m doing. [A lot] of people think they know. And on or before the 12th, we’ll make a decision.”

The president made the comments in the Rose Garden of the White House during a joint press conference with Nigerian President Muhammadu Buhari.

A European diplomat said in reaction that Netanyahu’s revelations about Iranian duplicity actually justifies the 2015 agreement signed with Iran.

“All of this obviously raises some questions regarding Iran’s credibility,” a European diplomat told The Times of Israel after Netanyahu’s speech. “But we made the nuclear deal precisely because we don’t trust the Iranians, not because we considered them very trustworthy.”

Iran’s state-run IRNA news agency dismissed the speech, saying Netanyahu is “famous for ridiculous shows.” The semi-official Fars news agency, believed to be close to the Revolutionary Guard, called it a “propaganda show.”

Earlier in the day, prior to the speech, Iran’s Foreign Minister Mohammad Javad Zarif assailed Netanyahu’s credibility, tweeting: “BREAKING: The boy who can’t stop crying wolf is at it again. Undeterred by cartoon fiasco at UNGA.”

Zarif wrote: “You can only fool some of the people so many times.” He also copied the photo of the graphic of a bomb that Netanyahu showed during his speech at the United Nations General Assembly from 2012.

A senior European diplomat told Reuters that the speech contained nothing new: “We knew all of this and what especially stands out is that Netanyahu doesn’t speak of any recorded violations of the (2015 Iran deal).”

Two U.S. intelligence officials who have monitored Iran’s nuclear weapons program for years and found Iran in compliance, said on Monday nothing in Netanyahu’s remarks appeared to contradict that view.

“We have seen no new and credible evidence that Iran is violating the agreement, either in the Prime Minister’s remarks today or from other sources,” said one of the officials, both of whom spoke to Reuters on the condition of anonymity.

Several former Israeli intelligence officials were quoted by The Jerusalem Post as saying that the Mossad’s success in obtaining the massive cache of documents was highly impressive.

But although it showed that Iran lied in the past and continued to try to conceal its actual pursuit of a bomb from the world, even after the 2015 nuclear deal obligated it to divulge all its activities, it did not do so, the Israelis conceded that Netanyahu provided no proof of violations since 2015. The officials names were not given.