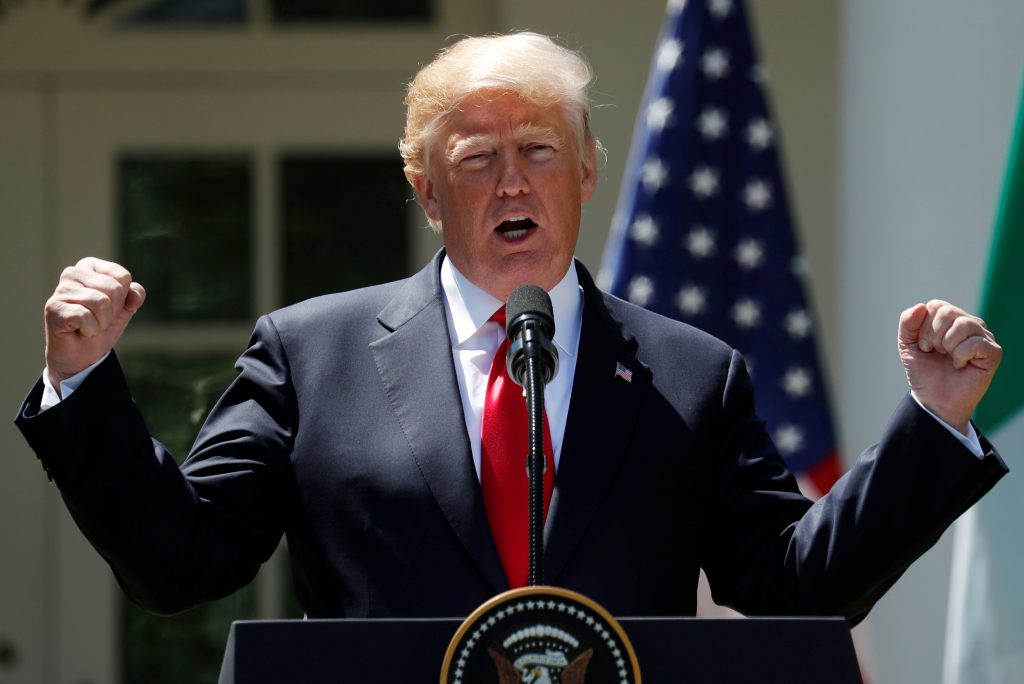 “The president has not made any decision yet,” Treasury Secretary Steven Mnuchin told Fox Business Network in an interview that aired Monday, when asked about extending exemptions to trading partners.

Mnuchin’s comments were similar to those of Commerce Secretary Wilbur Ross, who said late Saturday that the White House will announce its decision on tariffs right before the May 1 deadline.

So far, South Korea is the only nation to be spared from the duties, though nations including France and Germany have been pushing for the EU to be excluded.

“The president gave us time to address these issues and the president is going to make a decision,” Mnuchin said. “I expect that there will be a decision quickly.”

Pres. Trump’s embrace of tariffs this year has roiled financial markets and sparked fears of a trade war that could undermine the broadest global upswing in years. The EU has threatened to retaliate with duties on iconic American goods such as Harley-Davidson motorcycles and Kentucky bourbon.

The steel decision comes days before Mnuchin and other senior members of Pres. Trump’s cabinet travel to China in search of a deal that would head off a brewing trade dispute between the world’s two-biggest economies. Pres. Trump has threatened to slap tariffs on as much as $150 billion in Chinese imports, while Beijing has vowed to respond with duties on everything from American soybeans to airplanes.

“We’re looking to have a very frank discussion on trade, on the issues of the trade imbalance,” Mnuchin said. “President Trump has been very clear for the last year that he’s very focused on the trade deficit, and we’re looking to correct that.”

The U.S. had a $337 billion trade deficit in goods and services with China last year. Pres. Trump has asked China to cut the gap by $100 billion and open up the Asian nation’s markets to American products such as cars. But Chinese officials will refuse to discuss the $100-billion demand at talks in Beijing this week, the New York Times reported, citing unidentified people.

In exchange for a permanent exemption from the metals tariffs, the Trump administration is pushing countries to accept quotas on the amount of steel and aluminum they export to the U.S. South Korea accepted a quota of 70 percent of the average of its steel exports to the U.S. between 2015 and 2017, which can come in tariff-free.

The U.S. Aluminum Association last week sent a letter asking pres. Trump to grant exemptions to all “responsible” trade partners. But over the weekend, Century Aluminum Co. Chief Executive Officer Mike Bless, leading the second-largest U.S. aluminum producer, echoed the Commerce Department’s original recommendations to the president that said all imports must be subject to either quotas or tariffs.

The steel threat has complicated talks with Canada and Mexico on a revised North American Free Trade Agreement. Pres. Trump has dangled a permanent exemption as incentive to reach a tentative deal. But both Mexico and Canada have resisted the idea of a quota.

“There is no justification whatsoever for tariffs or quotas on Canadian steel and aluminum as a national security consideration,” Canadian Foreign Minister Chrystia Freeland said Friday. The U.S. imposed the tariffs after concluding that foreign shipments imperil its security.

Mexican Economy Minister Ildefonso Guajardo said, “a quota on steel would not be the best way to go.”

The uncertainty over steel tariffs isn’t just causing unease among allies. The U.S. Commerce Department is wrestling with a flood of requests from companies to exclude products from the steel and aluminum duties, creating a backlog that’s sparked calls for action from lawmakers and trade groups.

The Commerce Department says it’s already boosted staff, and wants approval from Congress to use more of its budgeted funds to help solve the problem. Some 3,500 exclusion requests have yet to be reviewed, while about 550 had been processed as of April 27, according to the department. No decision on a request can be made until it’s been reviewed and posted online for 30 days for any objections.