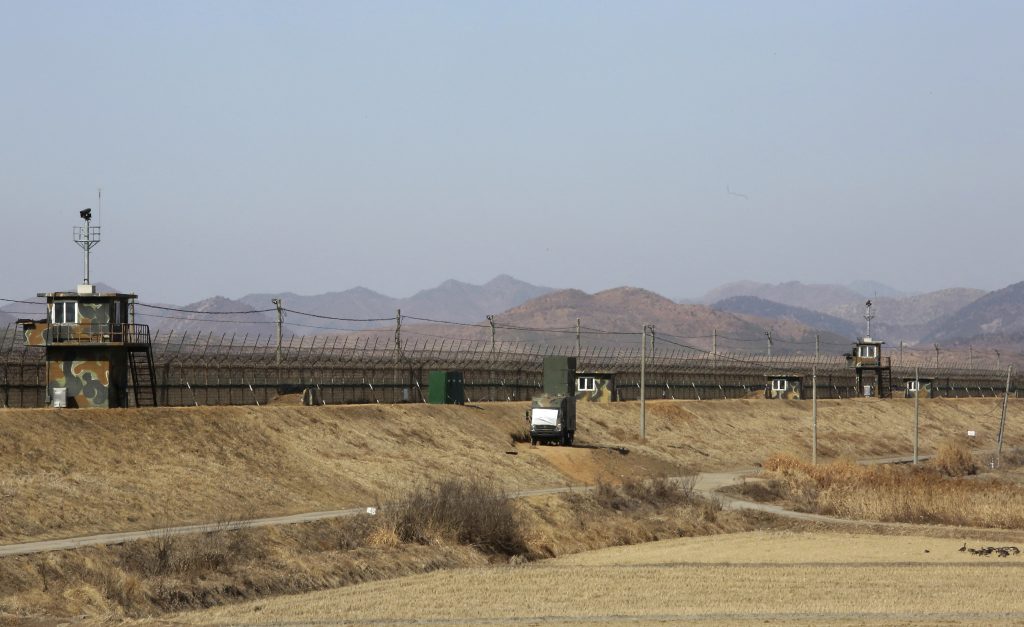 South Korea will remove propaganda-broadcasting loudspeakers from the border with North Korea this week, officials said Monday, as the rivals move to follow through with their leaders’ summit declaration that produced reconciliation steps without a breakthrough in the nuclear standoff.

During their historic meeting Friday at a Korean border village, North Korean leader Kim Jong Un and South Korean President Moon Jae-in agreed to end hostile acts against each other along their tense border, establish a liaison office and resume reunions of separated families. They also agreed to achieve a nuclear-free Korean Peninsula, but failed to produce specific time frames and disarmament steps.

Seoul’s Defense Ministry said it would pull back dozens of its front-line loudspeakers on Tuesday before media cameras. Ministry spokeswoman Choi Hyunsoo said Seoul expected Pyongyang to do the same.

South Korea had already turned off its loudspeakers ahead of Friday’s summit talks, and North Korea responded by halting its own broadcasts.

The two Koreas had been engaged in Cold War-era psychological warfare since the North’s fourth nuclear test in early 2016. Seoul began blaring anti-Pyongyang broadcasts and songs via border loudspeakers, and Pyongyang quickly matched the South’s action with its own border broadcasts and launches of balloons carrying anti-South leaflets.

Seoul’s announcement came a day after it said Kim told Moon during the summit that he would shut down his country’s only known nuclear testing site and allow outside experts and journalists to watch the process.

South Korean officials also cited Kim as saying he would be willing to give up his nuclear programs if the United States commits to a formal end to the Korean War and a pledge not to attack the North. Kim had already suspended his nuclear and missile tests while offering to put his nukes up for negotiations.

The closing of the Punggy-ri test site, where all six of North Korea’s atomic bomb tests occurred, could be an eye-catching disarmament step by Pyongyang. But there is still deep skepticism over whether Kim is truly willing to negotiate away the nukes that his country has built after decades of struggle and sacrifice.

According to a summit accord, Kim and Moon agreed to achieve “a nuclear-free Korean Peninsula through complete denuclearization,” rather than clearly stating “a nuclear-free North Korea.” Pyongyang has long said the term “denuclearization of the Korean Peninsula” must include the United States pulling its 28,500 troops out of South Korea and removing its so-called “nuclear umbrella” security commitment to South Korea and Japan.

Kim could offer more disarmament concessions during his meeting with President Donald Trump, expected in May or June, but it’s unclear what specific steps he would take. Some experts say Kim may announce scrapping North Korea’s long-range missile program, which has posed a direct threat to the United States.

U.S. National Security Adviser John Bolton reacted coolly to word that Kim would abandon his weapons if the United States pledged not to invade.

Asked on CBS whether the U.S. would make such a promise, Bolton said: “Well, we’ve heard this before. This is — the North Korean propaganda playbook is an infinitely rich resource. What we want to see from them is evidence that it’s real and not just rhetoric.”

Kim’s meeting with Moon was his second summit with a foreign leader since he took office in late 2011. In March, he traveled to Beijing and met with Chinese President Xi Jinping. While meeting with Xi, Kim suggested he prefers a step-by-step disarmament process in line with corresponding outside rewards, according to Chinese state media. U.S. officials want the North to take complete, verifiable and irreversible disarmament measures.

China is the North’s only major economic partner, but trade has declined by about 90 percent following Beijing’s implementation of economic sanctions imposed over the North’s nuclear and missile tests. Some analysts say Kim’s recent charm offensive was aimed at weakening the sanctions.

Meanwhile, the North’s parliament on Monday adopted a decree to sync its time zone with South Korea’s this Saturday. The North’s state news agency said the parliamentary move was made at the proposal of Kim, who found it was “a painful wrench to see two clocks indicating Pyongyang and Seoul times hanging on a wall of the summit venue.”

Moon’s office said Sunday that Kim made similar remarks to Moon during the summit.

The North in 2015 had set its clock by 30 minutes behind South Korea and Japan, saying the measure was aimed at rooting out the legacy of Tokyo’s 1910-45 colonial rule of the Korean Peninsula.