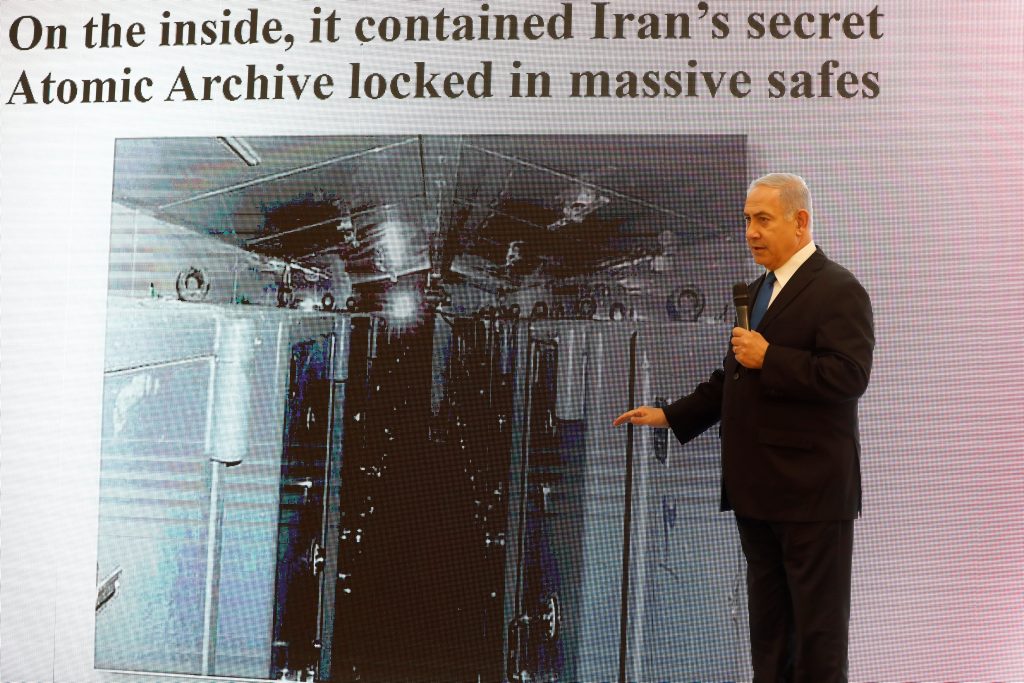 Israeli Prime Minister Binyamin Netanyahu had promised “dramatic news” concerning Iran in his speech on Monday night – and he did not disappoint.

Speaking in English from the Defense Ministry in Tel Aviv, Netanyahu revealed that Israeli intelligence has obtained “half a ton” of Iranian files related to that country’s nuclear-weapons program, describing it as “something the world has never seen before … new and conclusive proof” that Iran lied again and again about its compliance with the restrictions it agreed to on its nuclear program.

The speech came just days before U.S. President Donald Trump must decide whether to recertify the 2015 Iran nuclear deal, which Netanyahu has been highly critical of.

The prime minister pointed to large blowups displayed on the stage behind him of copied Iranian documents from their secret nuclear archives captured several weeks ago by Israeli intelligence.

He said they represented a mere fraction of the files – 55,000 pages, and another 55,000 files on 183 CDs – that “conclusively prove” that Iran falsely denied continuing its plan to build nuclear weapons, which it has carried on in secret to the present day. Video clips of Iranian leaders disavowing any nuclear ambitions were played, including one by Foreign Minister Zarif who claimed just last week that “we never wanted to produce a bomb.”

The materials have been shared, he said, with the United States, which “can vouch for its authenticity,” and will also be shared with the relevant international agencies in the coming days.

Netanyahu said that Iran’s nuclear program, called Project Amad, was officially closed in 2003, but that was only for international consumption.

“This atomic archive clearly shows that Iran planned, at the highest levels, to continue work related to nuclear weapons under different guises and using the same personnel, ” he said, adding that Iran even now is expanding the range of its nuclear-capable missiles.”They can reach Riyadh, Tel Aviv, Moscow, but they’re working on far, far greater ranges. They’re planning much longer range missiles to carry nuclear weapons.”

“We can now prove that Project Amad was a comprehensive program to design, build and test nuclear weapons,”said Netanyahu. He displayed what he described as “an original Iranian presentation from these files,” and “the mission statement: Design, produce and test five warheads, each with ten kiloton TNT yield for integration on a missile. You don’t need to read Farsi to read 10 kilotons here. TNT. This is the specific goal of Project Amad. That’s like five Hiroshima bombs to be put on ballistic missiles.”

Amad, which was never really abandoned, has all of “the five key elements of a nuclear-weapons program”: Bomb design, developing a nuclear core, nuclear implosion systems, testing and integrating nuclear payloads for missiles.

Netanyahu said that the documents prove four things: that Iran lied about never having a nuclear-weapons program; that it lied in 2015  “when it didn’t come clean to the IAEA, as required by the nuclear deal”; that even after the nuclear deal, “Iran continued to preserve and expand its nuclear-weapons know-how for future use”; and that the Iran nuclear deal is “based on Iranian lies and Iranian deception.”

The 2015 Iran deal, said Netanyahu, “is a terrible deal” that “should never have been concluded.”