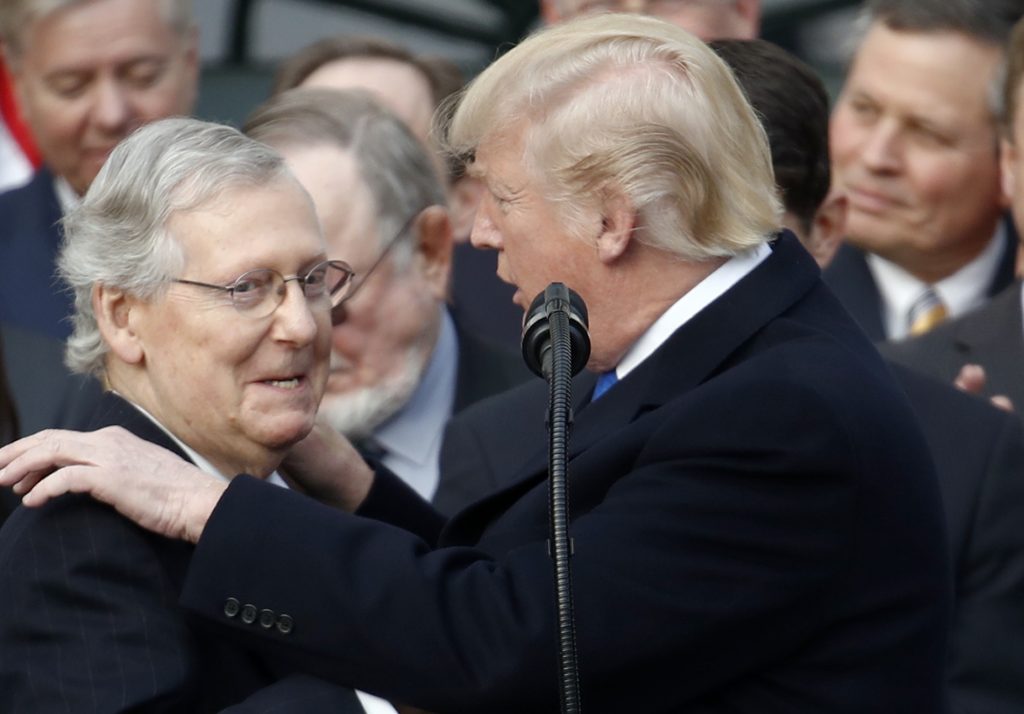 The Republican-led Senate confirmed Trump’s 15th appeals court nominee this week — more than the last five presidents at this juncture — with eight of the new judges in their 40s, and seven in their 50s. McConnell set the stage Thursday to confirm six more, one day after a committee voted to cut debate time, which if approved would further speed things up.

The court realignment is the product of the Senate Republican leader playing a long game by holding up then-President Barack Obama’s court nominees and then closely collaborating with President Trump’s White House Counsel Don McGahn. Both men have made it a priority to advance judges ensconced in originalist legal thinking favored by the Federalist Society, which distrusts New Deal-era jurisprudence and seeks to limit the federal government’s ability to assert powers that aren’t explicitly enumerated in the Constitution.

“The judicial enterprise that has been embarked on by the president and McConnell is the most successful effort we’ve seen in the GOP in the last year and a half,” said Leonard Leo, an outside adviser to the White House on judicial selections who also serves as the Federalist Society’s executive vice president.

President Trump’s record so far also includes 17 Trump-nominated judges on district courts, and conservative favorite Neil Gorsuch is on the Supreme Court after McConnell made the extraordinary move of refusing to consider Obama nominee Merrick Garland in 2016.

While liberals have torched the new judges as radical and out of touch, President Trump has won praise for his success on nominees from conservatives, even those who actively opposed him during the 2016 election.

“The high degree of competence and proficiency the administration has brought to this task is hard to reconcile with the haphazard and not always fully competent handling of lots of other issues by this administration,” said Jonathan Adler, a professor at Case Western Reserve University School of Law, and a Federalist Society member who praised President Trump’s judicial picks as unexpectedly strong.

In 2016, Professor Adler signed a letter titled “Originalists Against Trump” with five dozen fellow conservatives who argued that Mr. Trump “admires dictators as above the law” and cannot be trusted to respect the Constitution. Today, he says he was “very wrong” about that when it comes to Mr. Trump’s judicial selections, although he believes the heavy lifting is being done by McGahn and his staff, who’ve placed a premium on confirming their circuit court picks.

“I don’t see much evidence that the president has fully formed views on legal questions,” Prof. Adler said.

Yet some conservatives believe it will be his biggest legacy.

“His greatest achievement will be the judicial nominees, because it has a much longer-lasting legacy” than his other actions, said Rep. Mark Meadows of North Carolina, chairman of the conservative House Freedom Caucus. “He gets an A-plus for his nominations and the number that have been confirmed so far.”

Mr. Trump and Mr. McConnell are having their biggest effect on the 13 U.S. appeals courts, which are particularly influential. While the Supreme Court decides fewer than 70 cases a year, appellate courts ruled on or dismissed 59,040 cases for the year ending March 31, 2017, according to the Administrative Office of the U.S. Courts in Washington.

“These appellate judges are often the last step because so many cases never make it to the Supreme Court,” Leo said.

Mr. McConnell’s deputy chief of staff Don Stewart said the Kentucky Republican “met with President Trump and his team immediately after the election about the judicial vacancies and the need for well-qualified judicial nominees for the Senate to consider. He wasted no time.” He added that Mr. McGahn “has been incredible” in the process.

Liberal legal analysts, who have accused Mr. McConnell of stealing a Supreme Court seat from Obama, say they are troubled by President Trump’s judicial selections and the speed of confirmations.

“He’s had a very effective process for moving judicial nominees, which is unfortunate because the quality of his nominees is so lacking,” said Caroline Fredrickson, president of the American Constitution Society, adding that President Trump’s picks would feel at home in the 19th century. “They’re unqualified in certain circumstances. They’re extreme in nearly all circumstances.”

The latest circuit judge, confirmed Tuesday by the Senate, was Duncan Kyle to the 5th U.S. Circuit Court of Appeals. He came under fire from liberals, earning just one Democratic vote to squeak by 50 to 47.

President Trump has other opportunities. On Thursday he announced another eight nominations for district and appellate courts. Conservatives are eager to confirm as many nominees as they can this year while Republicans have a 51 to 49 majority, fearing a possible Democratic takeover of the Senate in November could slow them to a crawl in 2019.

They’ll be reshaping areas of law like civil rights, public health and worker protections, said Nan Aron, president of the liberal Alliance for Justice in Washington.

“This effort is a concerted plan to alter the federal bench, not just for two or four years, but for generations because judges serve lifetime terms,’” Ms. Aron said.

Mr. McConnell’s chief contribution to the effort, she said, was his insistence on delaying consideration of dozens of Mr. Obama’s selections, in addition to holding the Supreme Court seat open. In Mr. Obama’s final two years, Mr. McConnell allowed him to fill just two vacancies on the circuit courts and 18 on district courts. That left Mr. Trump with 108 judicial openings to fill when he took office.

Josh Holmes, a former chief of staff to Mr. McConnell, said the Republican leader seldom makes strong requests to his conference, so when he does, they listen. And he’s made judicial confirmations a priority.

“It’s not the [most exciting] issue in the world, but 20 years from now it’ll undoubtedly be the most important thing this Congress has done,” he said.

Asked if he was concerned that Democrats could exploit the precedent by refusing to allow a Republican president to fill a Supreme Court vacancy, Mr. Holmes responded, “Democrats had invented the judicial filibuster in the early 2000s then did away with it in 2013. And so it was inevitable that retribution would come at some point, and it did.”

Democrats have tried to slow the pace of confirmations by insisting on using all of the extensive floor time they can utilize when judicial selections are under debate. That’s slowed confirmation of district court judges and forced Mr. McConnell to prioritize appellate court picks. It’s typically taking 176 days for appellate judges to get confirmed, still better than the median of 215 days under Mr. Obama and 178 days under Mr. Bush, according to Mr. Wheeler’s data.

“If we lived in a normal time these nominations would be on the front page of every newspaper. They’d be the main story on every newscast,” she said. “There’s such an endless supply of outrages from this administration that it’s hard to get people to focus on the courts. And yet this is what Donald Trump is going to leave behind. It’s truly frightening.”