World Hours After Winning Job, Pompeo’s in Brussels in Show of Support for NATO
World 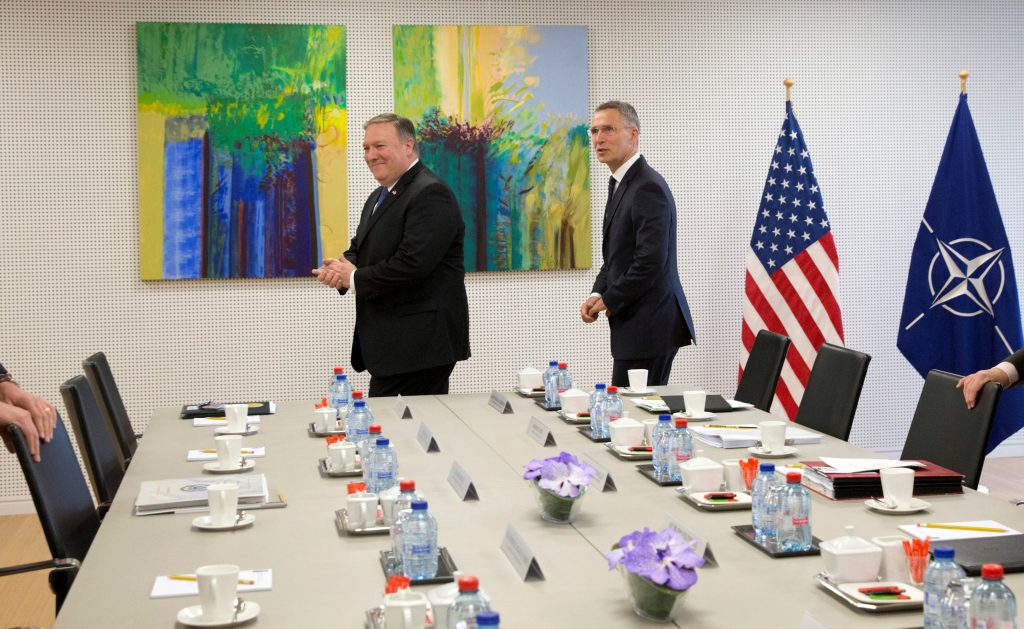 Barely 12 hours after being sworn in, U.S. Secretary of State Mike Pompeo went straight to NATO headquarters in Brussels in what European allies saw as strong support for an institution that President Donald Trump once called obsolete.

Pompeo’s first meeting was with NATO Secretary-General Jens Stoltenberg, which the head of the military pact said was “a great expression of the importance of the alliance.”

“The work that is being done here today is invaluable and our objectives are important and this missions means a lot to the United States of America,” Pompeo said at the start of his meeting with Stoltenberg.

Mike Pompeo, a former Army officer who was a Republican congressman, is regarded as a loyal supporter of President Donald Trump with hawkish world views.

His presence at NATO was seen as crucial as the alliance prepares for a July 11-12 summit in Brussels where NATO leaders are set to agree a stronger deterrent to Moscow, including a special command to defend the Atlantic in the case of conflict.

The State Department official said: “Our aim is to show a unified position on Russia, with no business as usual.”

The official also said NATO could expand to take in new Western Balkan members, something Russia is desperate to avoid, accusing the alliance of seeking to encircle Moscow and threaten peace in eastern Europe.

The NATO foreign ministers meeting comes amid the poisoning of a former Russian agent in Britain and Western air strikes against Russia-allied Syria, which the United States accused of a chemical attack in Douma on April 7.

Even before his confirmation on Thursday, the former CIA director was already involved in U.S. diplomacy, although it will be his first meeting at NATO, an organization founded on collective defense against the threat from the former Soviet Union.

Pompeo will also press members of the alliance to increase their military budgets to meet a target of 2 percent of economic output on defense every year by 2024, the official said.

The issue is sensitive to Europeans because the region is recovering from a long economic crisis and defense spending is less of a priority. But the United States insists that allies, especially Germany, pay their fair share of defending Europe.

As he left Washington on Thursday, the State Department said Pompeo would also visit Saudi Arabia, Jordan and Israel during the weekend.

He will have to quickly address a wide array of pressing international issues, including long conflicts in Syria and Afghanistan, as well as Russian assertiveness.

Washington is also working with European allies France, Germany and Britain on toughening a 2015 nuclear agreement with Iran, an issue Pompeo is expected to discuss while in Brussels.

Secretary Pompeo opposed the Iran nuclear accord while in Congress. He once suggested the answer to Tehran’s nuclear program – which Iran has always said was for peaceful means only – was 2,000 bombing sorties.

Pompeo said during his confirmation hearing that he was open to fixing, rather than blowing apart, the pact, which the West believes is essential to preventing Iran from getting a nuclear bomb.

He will also discuss the nuclear agreement and Iran’s regional influence in places like Yemen and Syria when he visits the Middle East.

On his first stop in Saudi Arabia on Saturday, Pompeo will meet Saudi King Salman and Foreign Minister Adel al-Jubeir. In Yerushalayim, he will meet Prime Minister Binyamin Netanyahu, and in Jordan hold talks with King Abdullah.