Politics At Hearings, Scott Pruitt Says He is Not to Blame for EPA Ethics Woes
Politics 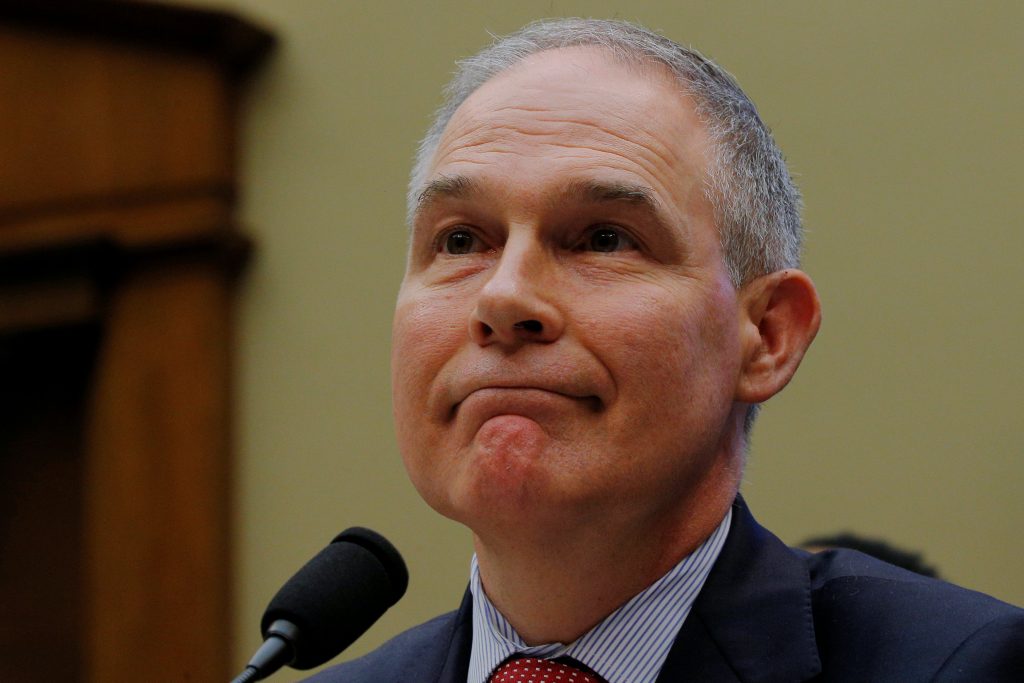 The EPA administrator said that “twisted” allegations against him were meant to undermine the administration’s anti-regulatory agenda, and he denied knowing details of some of the extraordinary spending done on his behalf at the agency.

The public grilling at back-to-back House hearings on Thursday, convened to consider the EPA’s budget, came as support has appeared to erode for Pruitt among fellow Republicans after revelations about unusual security spending, first-class flights, a sweetheart condo lease and more. Even Republicans who heartily support Pruitt’s policy agenda said his apparent lapses had to be scrutinized.

Although most of the Republican lawmakers at the hearings rallied around Pruitt, reviews were mixed. Rep. John Shimkus of Illinois, chairman of the first panel that questioned Pruitt, said afterward that the EPA chief was “a little vague,” adding, “It’s never a good idea to blame your staff in public.”

Asked whether Pruitt should resign, he said that’s not his call and suggested it’s up to President Donald Trump.

Thursday’s hearings were Pruitt’s first major appearance since a Fox News interview in early April that was widely considered to be disastrous within the West Wing.

Before Congress, the administrator demonstrated his background as a lawyer, giving clipped answers and repeating rehearsed talking points.

He visibly bristled as Democrats pressed about the many financial allegations against him, then relaxed when Republicans on the panel gave him openings to expand on his policy steps at EPA.

“It’s shameful that this day has turned into a personal attack,” GOP Rep. Bill Johnson of Ohio said.

Trump has stood by his EPA chief, but behind closed doors, White House officials concede that Pruitt’s job is in serious jeopardy.

Pruitt has faced a steady trickle of revelations involving pricey trips in first-class seats and unusual security spending, including a $43,000 soundproof booth for making private phone calls. He also demanded 24-hour-a-day protection from armed officers, resulting in a 20-member security detail that blew through overtime budgets and racked up expenses approaching $3 million.

The EPA chief acknowledged under sharp questioning that he did, in fact, know something about huge pay raises given to two women on his staff, at least one of them a friend, after insisting weeks ago that he didn’t approve the raises and didn’t know who did. After his initial denial, documents emerged showing that EPA chief of staff Ryan Jackson signed off on the raises and indicated that he had Pruitt’s consent.

Pruitt said Thursday that he delegated authority to Jackson to give the raises but didn’t know the exact amounts. Senior legal counsel Sarah Greenwalt received a raise of more than $66,000, bringing her salary to $164,200, and scheduling director Millian Hupp saw her salary jump from $48,000 to $114,590.

Under questioning, Pruitt appeared to acknowledge that Hupp helped him find accommodations in the capital but said that her search apparently did not cost taxpayers. “I’m not aware of any government time being used,” he said. “She is a friend.”

As he has previously, Pruitt sought to deflect questions about any missteps by blaming subordinates.

— On the communications booth: “I was not involved in the approval of the $43,000, and if I had known about it, Congressman, I would not have approved it.”

— On flying first class at taxpayer expense: “Security decisions at the agency are made by law-enforcement personnel, and I have heeded their counsel.”

— On the pay raises to the two women: “I was not aware of the amount provided or the process that was used in providing that.”

At several points, he spoke of decisions made by “career individuals at the agency.”

“You’re the guy in charge,” Democratic Rep. Peter Welch of Vermont countered. “It really seems like there’s something on your desk with the motto: ‘The buck stops nowhere.’ ”

Pruitt drew an unusual rebuke from the office of EPA’s inspector general, Arthur Elkins, while he was still testifying. A spokesman for Elkins, Kentia Elbaum, said that he never signed off on an internal review of security threats that Pruitt cited at the hearing to explain why he needed unusual arrangements for his safety.

Elbaum said that the summary was prepared by Patrick Sullivan, an assistant inspector general, and provided to Pruitt’s security team, but that it was later “leaked without authorization.”

Pruitt read aloud from two security threats, one from a man who tweeted that he planned to shoot Pruitt. Investigators determined that the person who wrote the tweet “is currently believed to be living in India.”

Pruitt’s troubles began in earnest last month, when ABC News first reported that he had leased a Capitol Hill condo last year for just $50 a night that was co-owned by the wife of a veteran fossil-fuels lobbyist whose firm had sought regulatory rollbacks from EPA.

Both Pruitt and the lobbyist, Steven Hart, denied that he had conducted any recent business with EPA. But Hart was forced to admit last week that he had met with Pruitt at EPA headquarters last summer after his firm, Williams & Jensen, revealed that he had lobbied the agency on a required federal disclosure form.

Asked Thursday whether he had received any other gifts from lobbyists seeking favors from EPA, Pruitt replied, “I’m not aware of any instances.”