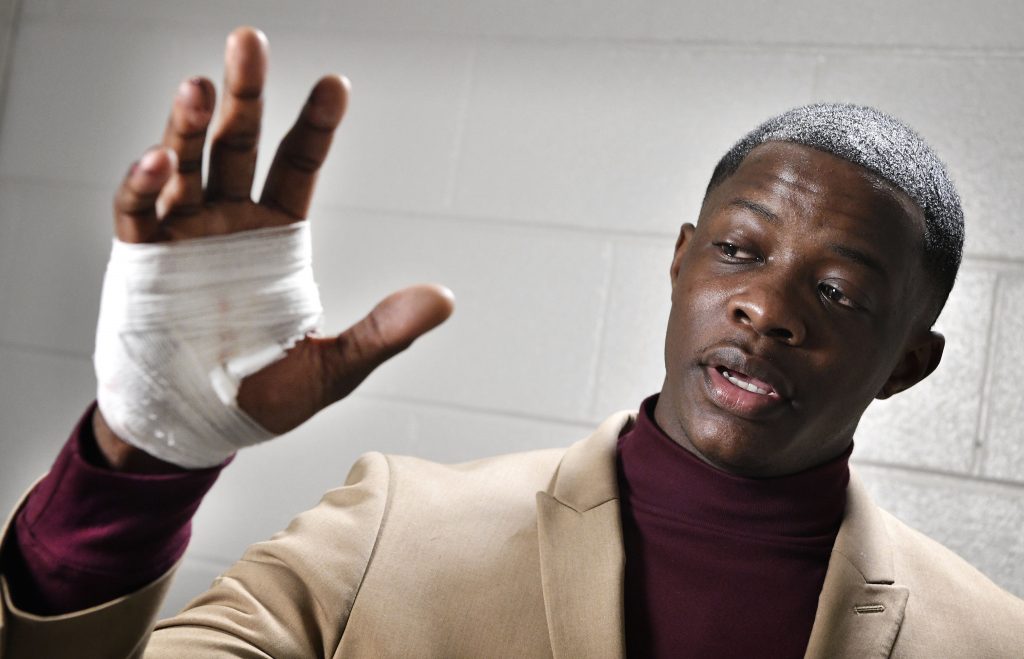 James Shaw Jr., who single-handedly wrestled an AR-15 from a gunman at a Tennessee Waffle House on Sunday, has now raised more than $158,000 for the victims’ families. And donations are still pouring in.

Shaw has repeatedly said that his acts were not heroic, that he was simply trying to save his own life when he confronted the shooter who had just killed four people. But people across the country have hailed his courage, calling him a hero and writing notes of admiration on the GoFundMe page he started hours after the shooting.

“Thank you so much, Mr. James Shaw, Jr. You are a true hero,” wrote Janet Peters.

More than 4,000 people have donated to the fund.

Shaw was honored by state lawmakers this week for his bravery. A resolution recognizing Shaw’s bravery passed unanimously in the Tennessee House, as lawmakers gave him a hero’s welcome, according to the Tennessean.

Since saving the lives of the other customers and the staff at the Waffle House on Sunday, Shaw has been under the media spotlight, telling his story and making appearances. He also is recovering from a gunshot wound from a bullet that grazed his arm, and burns from grabbing the gun’s barrel.

At the time of the shooting, Shaw was getting breakfast with a friend. Police say alleged shooter Travis Reinking, 29, opened fire, killing four people and injuring numerous others at a South Nashville Waffle House.

“I’m not a hero. I’m just a regular person, and I think anybody could have did what I did if they are just pushed into that kind of cage,” Shaw said shortly after the shooting. “You have to either react or you’re going to fold, and I chose to react because I didn’t see any other way of living, and that’s all I wanted to do. I just wanted to live.”

Reinking was arrested after a 34-hour door-to-door manhunt. Police found him hiding in the woods behind a construction site about a mile from the Waffle House.

As the dramatic events were unfolding, Shaw was raising money for the victims.

And then a man in New York decided to start a GoFundMe page to benefit Shaw himself. On the page it says the money perhaps could go toward a college fund for Shaw’s 4-year-old daughter, or even for a family vacation or other discretionary spending. That fund has already reached $170,000.

“I normally don’t get involved directly in these matters, but James’ grace has inspired me to start this page to give him the support I feel he deserves,” wrote freelance journalist Yashir Ali, who started the page.

More than 5,000 people have donated to Ali’s fundraiser for Shaw.

Flenda Whitney wrote on the page: “James Shaw is the face of courage and humility. Many blessings to this man and his family.”

The shooting started about 3:15 a.m. when Reinking arrived at the Waffle House parking lot, according to Metro Nashville Police Department. He sat in his pickup for a few minutes, then got out and fatally shot two people outside the restaurant, police said. Reinking then went inside the Waffle House and continued shooting, killing two others, according to police.

Shaw was inside. A bullet grazed his arm. He was behind a swivel door when he saw the gunman pause, either to reload or because something was amiss with the gun.

Shaw knew this was his only moment to act.

He ran to the gunman, and the two wrestled for the gun. Shaw overpowered the gunman, grabbed the barrel of the AR-15 and tossed the weapon over the Waffle House counter and out of the shooter’s reach.

“I kind of made up my mind, because there was no way to lock that door, that if it was going to come down to it, he was going to have to work to kill me,” Shaw later told the Tennessean.

Shaw said that his motivation was self-preservation and that he should not be put on a pedestal.

“I want people to know that I did that completely out of a selfish act,” said Shaw. “I was completely doing it just to save myself.”

“My heart goes out to James Shaw, American hero, and to everyone who was affected by this horrible event. We are keeping you all in our hearts,” Sarah Klevan wrote on the GoFundMe for the victims.