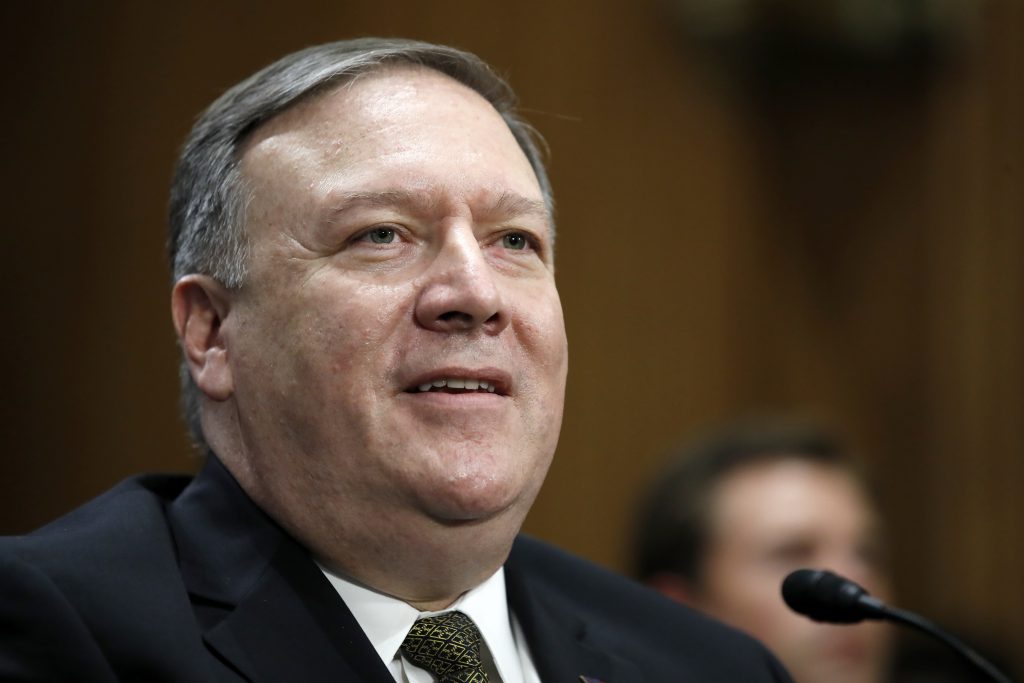 The Senate confirmed Mike Pompeo as secretary of state on Thursday, despite lingering objections from Democrats who’ve questioned his record of hawkish policy positions and past controversial statements about minority groups.

The split vote represents the political scrutiny Pompeo is likely to encounter as he moves from the CIA to the State Department, where he’ll be facing the simultaneous challenges of reinvigorating an agency beset by flagging morale and answering for a president who is prone to impulsiveness.

Pompeo, who grew close to President Donald Trump as his CIA director, takes over at State as the United States faces a host of foreign policy challenges. Near term, a deadline looms for extending the Iran nuclear deal and for Trump’s historic denuclearization talks with North Korean leader Kim Jong Un.

He’ll also have a prominent role in negotiating the Trump administration’s relationship with European allies, and addressing Russian aggression. On the latter, Pompeo has advocated more punitive actions than the president has been willing to mete out.

In those and other matters, Pompeo is expected to strike a dramatically different tone with Trump than his predecessor, Rex Tillerson, who had a testy relationship with the president that often left them publicly at odds. Tillerson also clashed with the professional staff of the department, who felt marginalized under his leadership. The 74,000 employees, two-thirds of them working abroad, will be looking for early cues that Pompeo appreciates their expertise and wants to return the State Department to its traditional place at the center of U.S. foreign policy.

He will have his hands full filling crucial jobs. Eight of the nine senior staff positions at State are unfilled, as are 60 ambassadorships and 10 of the 22 assistant secretary positions. The department is the only agency in the Trump administration that still has a hiring freeze in place. Pompeo has vowed to address staffing shortages immediately and end the freeze. Last week he also indicated to members of the Senate Foreign Relations Committee that he would be open to more funding than the 30 percent budget cut the White House has proposed for the department, telling senators that even if Tillerson had said he wouldn’t know what to do with even one additional dollar in funds, “I’ll take the extra dollar.”

Some will be looking for a return to daily press briefings, which went on hiatus under Tillerson before returning to a pace of twice weekly. State Department employees follow the briefings religiously for statements of policy to guide them.

But his earliest tests will take place in the first few weeks of his tenure, on the world stage.

Pompeo’s confirmation was hustled to Thursday to ensure that he would be able to attend a Friday conference of NATO foreign ministers in Brussels as the newly confirmed secretary of state.

Pompeo will then travel to Saudi Arabia, Yerushalayim and Jordan, where he will “discuss critical regional and bilateral issues.”

By May 12, Pompeo will have to advise Trump on whether to extend waivers to sanctions suspended under the 2015 Iran deal, a momentous decision that could lead to the United States reneging on its commitments and effectively withdrawing from the pact.

The new U.S. embassy in Yerushalayim is slated to open May 14. The move, unilaterally decided by the administration, was overwhelmingly condemned in the United Nations. It will fall to Pompeo to make plans to build a bigger embassy so that all the employees in Tel Aviv can work there.

And Pompeo is expected to take a lead role in the run-up to a planned early June summit between Trump and North Korea’s Kim, a meeting that could pave the path for talks leading to Pyongyang abandoning its nuclear weapons. Trump recently dispatched Pompeo to Pyongyang, and as secretary it is anticipated he will be intimately involved in the summit and any talks that ensue.