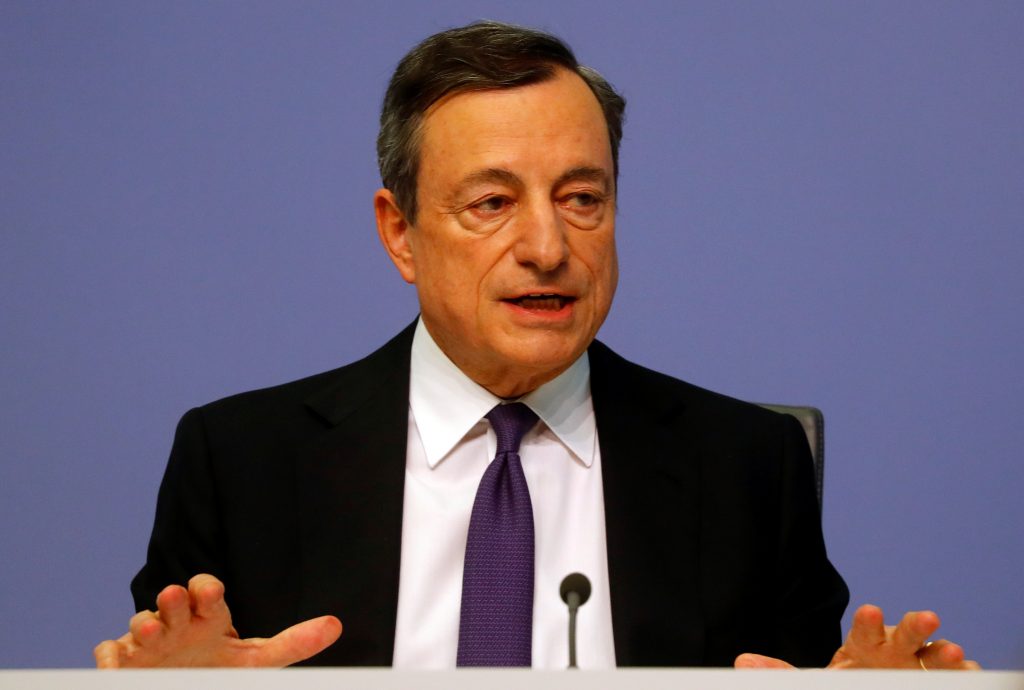 European Central Bank President Mario Draghi says that recent signs of weakening economic growth are grounds for caution but not worrisome enough yet to consider changing the bank’s stimulus and interest rate policy.

Draghi said Thursday that recent data points to “some moderation” in the economic growth in the 19 countries that use the euro, while still remaining “consistent with a broad-based expansion.”

He said it could be that the exceptionally strong growth of last year is returning to a more normal pace and that the bank would have to study incoming data more. He noted the potential for damage from tensions over trade, which have grown since U.S. President Donald Trump announced tariffs on some imports.

Overall, the bank’s take was “caution tempered by unchanged confidence” that the economy was still on the upswing.

Recent economic indicators such as surveys of business executives or statistics on industrial production have suggested a slowing of growth in the first three months of the year. The eurozone finished 2017 strongly with 2.4 percent growth, the best performance in a decade, buoyed by ECB stimulus and a rise in global growth that increased trade.

Draghi said that some causes could be temporary, such as weather, strikes or calendar effects. And the bank was still processing that. “The first thing we have to do is understand what has happened.”

Draghi gave little hint about when the bank might end its 30 billion euros ($36 billion) in bond purchases, currently slated to run at least through September. That is a stimulus measure that pumps newly printed money into the economy, a step that can raise inflation. Many analysts expect a clearer sign on what will happen after September at the bank’s June 14 or July 26 meeting.

The ECB is trying to push up inflation from the current annual rate of 1.3 percent toward its goal of just under 2 percent, considered best for the economy. Economic growth should push up prices as more people get jobs and wages rise along with demand for labor. But that has been slower to happen than usual. Any slowing of growth could mean it could take even longer for the ECB to reach its goal.

The ECB is lagging the U.S. Federal Reserve in raising interest rates, which central banks lowered sharply to counter the effects of the 2008-2009 financial crisis and the Great Recession. The U.S. economy has moved ahead faster and the Fed’s benchmark rate is now 1.5 percent, compared to zero for the ECB. Years of stimulus have sent stock and bond markets higher and central bankers are at pains to move carefully as they halt or withdraw stimulus to avoid market turbulence.

On top of leaving the short-term interest rate at zero on Thursday, the ECB council did not touch the deposit rate at which the ECB takes deposits from commercial banks. That rate is minus 0.4 percent, meaning banks pay a penalty on the funds they deposit. The aim is to push them to lend the money instead.

Stimulus policies have widespread effects on markets, companies and consumers. Zero interest rates help companies borrow, increasing economic activity and helping reduce unemployment. They can make it easier to buy houses with mortgage borrowing and take pressure off the finances of indebted eurozone member governments by lowering their debt service costs. But they also deprive savers of returns on conservative holdings.