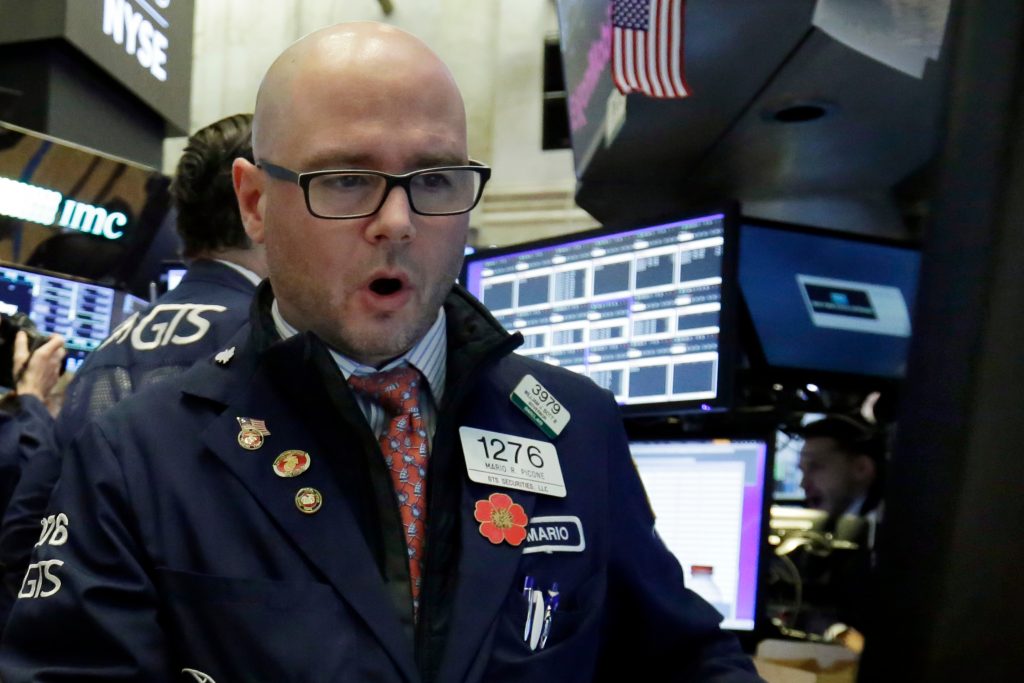 U.S. stocks are wobbling and trading mostly lower Wednesday as investors continued to worry that growing costs for critical materials along with rising interest rates will affect profit growth for companies. U.S. bond yields are rising again and setting four-year highs while oil prices are at three-year highs. Stock indexes in Europe and Asia are also falling after U.S. indexes took a steep drop the day before.

Almost two-thirds of the stocks on the New York Stock Exchange were trading lower. Banks took some of the largest losses. Technology, health care and industrial companies also declined. Those stocks tend to do better in times of faster economic growth.

PAYING THE COST: Stocks slumped Tuesday after heavy machinery maker Caterpillar said it doesn’t expect to top its first-quarter earnings for the rest of this year. Company profits fuel the stock market, and when they are rising, stocks tend to do well. Investors expected strong profit growth this year thanks to the growing global economy and the corporate tax cut President Donald Trump signed at the end of 2017. That optimism helped send stocks to record highs in January.

The comments from Caterpillar’s executives, as well as from other major companies like 3M and Sherwin-Williams, had investors worrying about whether that growth will show up. On Wednesday Goodyear Tire & Rubber said higher raw materials costs and weaker demand hurt its business in the first quarter. Its stock fell 4.9 percent to $25.55.

ON THE DEFENSIVE: Defense contractor General Dynamics shed 3.5 percent to $214.23 and Northrop Grumman slipped 2.1 percent to $334.35 as their first-quarter reports failed to excite investors. Lockheed Martin, which tumbled following its report Tuesday, fell another 2.3 percent to $328.88 and Raytheon declined 1.7 percent to $215.

Citi Investment Research analyst Jonathan Raviv said Northrop Grumman and Lockheed Martin reported good results but didn’t raise their forecasts for how much cash they will make. He said the companies were likely just being cautious, but investors were concerned.

ON THE MOVE: Aerospace company Boeing topped Wall Street’s estimates and raised its forecasts for the year. Boeing rose 2.5 percent to $337.21. Railroad operator Norfolk Southern also climbed 5.5 percent to $142.42 after it, too, surpassed analyst projections. That helped pull other industrial companies higher.

BONDS: Investors may have also been worried about rising interest rates, which tend to slow down economic growth by making it more expensive for people and companies to borrow money. Bond prices fell again Wednesday, sending yields higher. The yield on the 10-year Treasury note kept setting four-year highs as it rose to 3.02 percent from 3 percent.

SKY TUSSLE: Media conglomerate Comcast offered to buy British broadcaster Sky for $30 billion. Sky had previously accepted a $16.5 billion offer from 21st Century Fox, but British regulators haven’t approved the deal. They are investigating whether Fox’s bid for Sky would give Murdoch and his family, which owns several other media titles in the U.K., too much control over the country’s news media.

Comcast also had a stronger first quarter than analysts expected, although it continued to lose cable subscribers. Its stock jumped 2.9 percent to $34.33. Sky gained 3.9 percent in London. Fox rose 2.2 percent, to $36.80, while Disney, which plans to buy most of Fox’s entertainment assets, climbed 1.9 percent to $101.36.

COMMODITIES: Benchmark U.S. crude oil fell 12 cents to $67.58 in New York. It’s up 32 percent over the last 12 months and trading at its highest price in more than three years. Brent crude, used to price international oils, fell 37 cents to $73.4 a barrel in London.