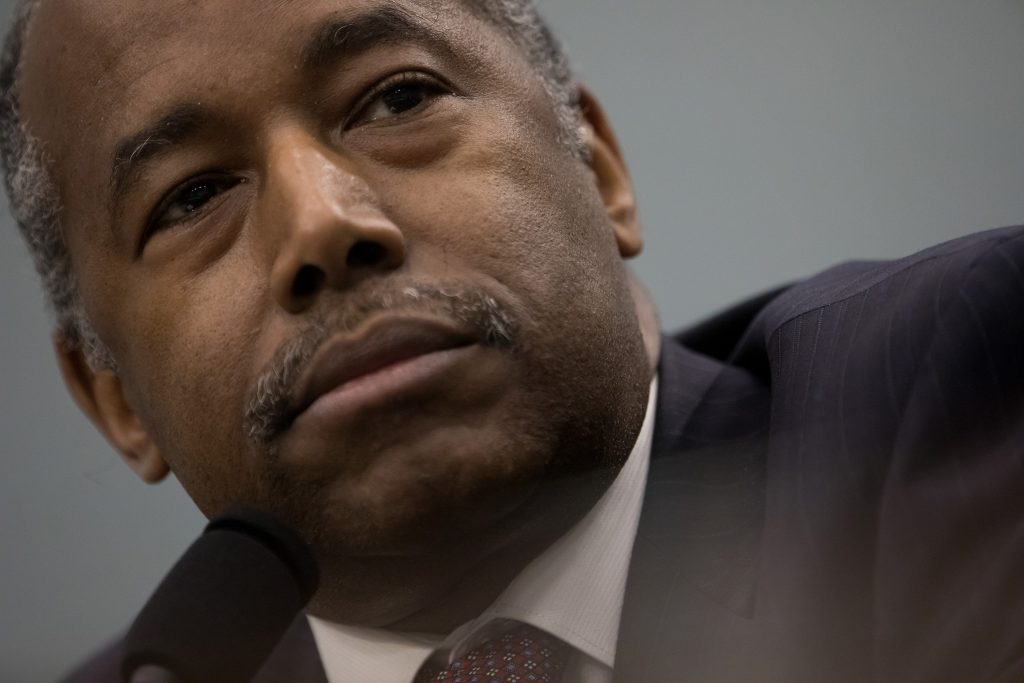 Housing and Urban Development Secretary Ben Carson on Wednesday proposed raising the amount that low-income families are expected to pay for rent — tripling it for the poorest households — as well as making it easier for property owners to demand work requirements for those receiving federal housing subsidies.

The move to overhaul how rental subsidies are calculated would affect 4.7 million families relying on federal housing assistance. The proposal legislation would require congressional approval.

“There is one inescapable imperative driving this reform effort,” Carson said in a call with reporters. “The current system isn’t working very well. Doing nothing is not an option.”

Tenants generally pay 30 percent of their adjusted income toward rent or a public housing agency minimum rent — which is capped at $50 a month for the poorest families. The administration’s proposal sets the family monthly rent contribution at 35 percent of gross income, or 35 percent of their earnings working 15 hours a week at the federal minimum wage. Under the proposal, the cap for the poorest families would rise to about $150 a month — three times higher than the current minimum. About 712,000 households would see their rents rise to the new monthly minimum of $150, HUD officials said.

Housing advocates criticized the proposal as “cruel hypocrisy,” coming on the heels of tax breaks to wealthy Americans and corporations.

“When we are in the middle of a housing crisis that’s having the most negative impact on the lowest-income people, we shouldn’t even be considering proposals to increase their rent burdens,” said Diane Yentel, president of the National Low Income Housing Coalition.

The bill would also allow public housing agencies and property owners to impose work requirements. Currently, only 15 housing authorities in about a dozen states require some sort of work or job training in return for benefits, HUD officials said. In Atlanta, Georgia and Charlotte, North Carolina, at least one adult needs to work 30 hours a week for a household to receive housing benefits. Chicago requires able-bodied beneficiaries to work 20 hours a week.

Seniors over the age of 65 and individuals with disabilities would be exempt from the rental increases for the first six years. They would also be exempt from any work requirements. HUD officials said that this group makes up more than half of the 4.7 million families receiving subsidies.

“Every year, it takes more money, millions of dollars more, to serve the same number of households,” Carson said, citing years-long waiting lists for federal housing assistance. “It’s clear from a budget perspective and a human point of view that the current system is unsustainable.”

Carson said decades-old rules on how rent is calculated are “far too confusing” and convoluted, often resulting in families who earn the same income paying vastly different amounts of rent “because they know how to work the system.”

“They know how to include certain deductions that other people may not be aware of,” Carson said. “We really want to level the playing field and make it much more even for everyone.”

HUD also seeks to eliminate deductions for medical and child-care costs when determining a tenant’s rent.

Carson said the current rules, which require an annual review of beneficiaries’ household income, also create “perverse consequences” that discourage people from earning more income. Under the proposed bill, income verification would only be required every three years, which Carson said would encourage residents to work more without immediately facing a rent increase.

The Trump administration has long signaled through its budget proposals and leaked draft legislation that it seeks to increase the rents that low-income tenants pay to live in federally-subsidized housing. The White House budget proposal for the 2019 fiscal year indicated that it would “encourage work and self-sufficiency” across its rental assistance programs.

Barbara Sard, vice president for housing policy at the Center on Budget and Policy Priorities, said the latest proposal, if passed, could result in millions of individuals losing their homes. “The very purpose of these programs is to provide a stable home for people who otherwise can’t manage on their own,” Sard said. “Ignoring that destroys the effectiveness of these programs to prevent homelessness and keep children out of foster care.”

Carson laid out the administration’s plans in a press call about an hour before a Wednesday afternoon House Financial Services Subcommittee hearing on rent reform.

“Changes that are made to the rental structure ultimately have to be approved by Congress,” Carson said. “These are the suggestions that we are making.”