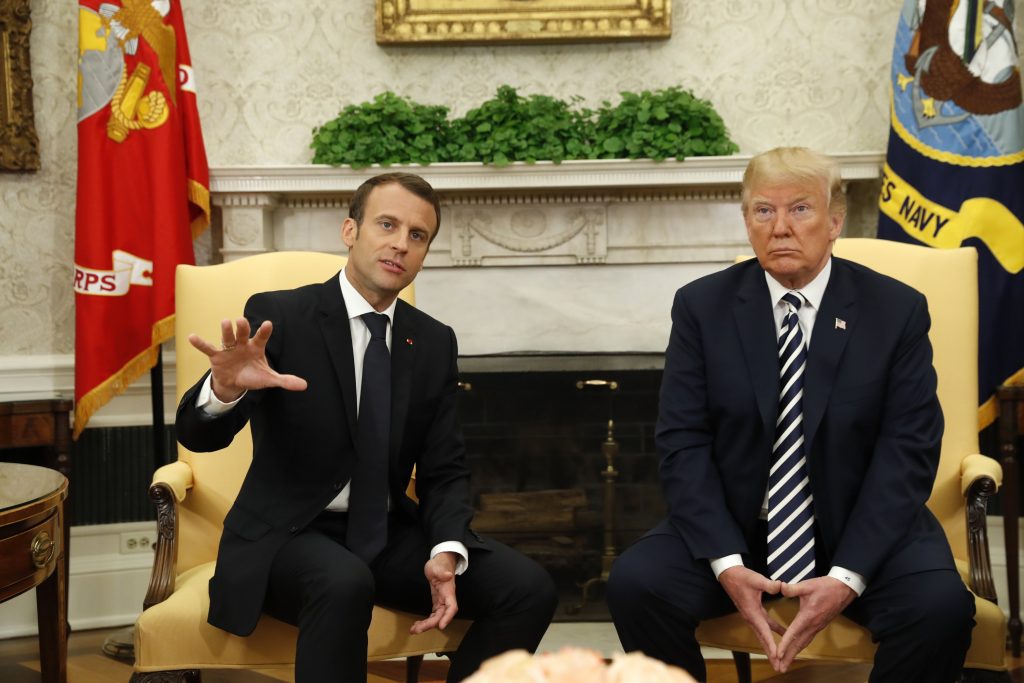 President Donald Trump on Tuesday said that Iran would face bigger problems if Tehran restarts its nuclear program and called the nuclear accord with Iran “insane.”

“They will have bigger problems than they have ever had before,” President Trump said of Iran at the start of a White House meeting with French President Emmanuel Macron, who told reporters he wants to contain Iran in the region.

President Macron, whose visit will be followed by one on Friday from German Chancellor Angela Merkel, sees the Iran deal as the best available option to constrain Iran’s nuclear ambitions.

President Trump said the relationship he forged with Macron at the start of his presidency was a testament to the “enduring friendship that binds our two nations.” He thanked the French leader for his “steadfast partnership” in the recent missile strike in response to the chemical attack in Syria.

President Macron told Trump that together the U.S. and France would defeat terrorism, curtail weapons of mass destruction in North Korea and Iran and act together on behalf of the planet, a reference to Monsieur Macron’s work to revive a U.S. role in the Paris climate accord.

“History is calling us. It is urging our people to find the fortitude that has guided us in the most difficult of times,” President Macron said. “France and with it, Europe, and the United States have an appointment with history.”

The social highlight of Macron’s visit, the first state visit of the Trump presidency, comes Tuesday night with a lavish state dinner at the White House.

Tuesday’s meetings follow the collaboration by the U.S., France and Britain in missile strikes in Syria earlier this month to respond to the alleged chemical weapons attack. The U.S. has 2,000 troops in Syria assisting local Arab and Kurdish fighters against IS, though Trump has resisted a deeper U.S. involvement and is eager to withdraw completely from Syria.

Macron’s pomp-filled three-day visit to Washington underscores the importance that both sides attach to the relationship: Macron, who calls Trump often, has emerged as something of a “Trump whisperer” at a time when the American president’s relationships with other European leaders are more strained. Trump, who attaches great importance to the optics of pageantry and ceremony, chose to honor Macron with the first state visit of his administration as he woos the French president.

For all their camaraderie, Macron and Trump disagree on some fundamental issues, including the multinational nuclear deal, which is aimed at restricting Iran’s development of nuclear weapons. Trump, skeptical of the pact’s effectiveness, has been eager to pull out as a May 12 deadline nears. Macron says he is not satisfied with the situation in Iran and thinks the agreement is imperfect, but he has argued for the U.S. sticking with the deal on the grounds that there is not yet a “Plan B.”