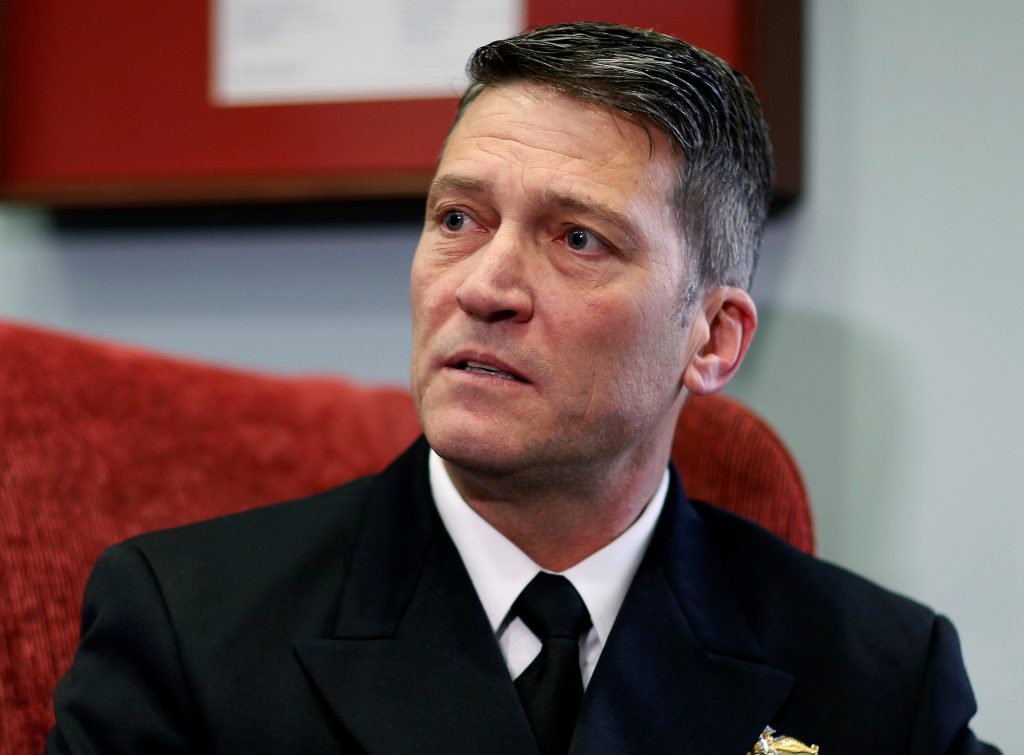 President Donald Trump said Tuesday, that his choice to lead Veterans Affairs would soon make a decision on whether to withdraw after the emergence of late-surfacing allegations about inappropriate behavior on the job and overprescribing prescription drugs. “It’s totally his decision,” Trump said.

Trump said during a joint news conference at the White House with French President Emmanuel Macron that he would “stand behind” Dr. Ronny Jackson to become his VA secretary, calling him “one of the finest people that I have met.” But he questioned why Jackson would want to put up with the scrutiny, which he characterized as unfair.

Trump said he didn’t want to put Jackson through “a process like this — it’s too ugly and too disgusting. So, we’ll see what happens. He’ll make a decision.” Trump added, “I wouldn’t do it. What does he need it for? To be abused by a bunch of politicians that aren’t thinking nicely about our country?”

Jackson’s hearing had been set for Wednesday at the Senate Veterans Affairs Committee, but was indefinitely postponed amid the allegations.

“We take very seriously our constitutional duty to thoroughly and carefully vet each nominee sent to the Senate for confirmation,” said the chairman, Sen. Johnny Isakson, R-Ga., and the top Democrat on the committee, Sen. Jon Tester of Montana. “We will continue looking into these serious allegations and have requested additional information from the White House to enable the committee to conduct a full review.”

The two lawmakers sent a letter to Trump on Tuesday, requesting additional information about Jackson, who has served as a White House physician since 2006. It demands any communication between the Pentagon and the White House for the last 12 years regarding “allegations or incidents” involving him.

With Congress set to recess Friday for a week, Tester said the soonest a hearing could be held would be in about 10 days. “We’re vetting hard right now,” he told reporters. “We still have more information to find out.”

Isakson told fellow GOP senators over the weekend about the allegations prompting those on the panel to give their support for delaying the hearing, one senator said.

“Chairman Isakson had a phone conversation with a lot of us around the committee over the weekend, indicated that there had been some unsubstantiated allegations made, and he wants to do it right,” said Sen. Mike Rounds, R-S.D. on Fox News with Shannon Bream.

“We told him that if he wanted to delay the meeting, that was fine with us. We most certainly want to get all the facts out,” he said.

Democrats on the committee assembled privately late Monday. Tester reiterated to the other senators that the allegations were out there, one aide said. But no specific evidence of wrongdoing was offered.

White House and VA officials were quietly discussing a delay with key allies outside the administration, even as the White House on Tuesday scrambled to save Jackson’s troubled nomination.

“Admiral Jackson has been on the front lines of deadly combat and saved the lives of many others in service to this country. He’s served as the physician to three Presidents — Republican and Democrat — and been praised by them all,” said White House spokesman Hogan Gidley. “Admiral Jackson’s record of strong, decisive leadership is exactly what’s needed at the VA to ensure our veterans receive the benefits they deserve.”

Trump selected Jackson to head the VA last month, after firing former Obama administration official David Shulkin, following an ethics scandal and mounting rebellion within the agency. But Jackson, who has worked as a White House physician since 2006, has faced numerous questions from Republican and Democratic lawmakers as well as veterans’ groups about whether he has the experience to manage the massive department of 360,000 employees serving 9 million veterans.

A doomed nomination would be a political blow to the White House, which has faced criticism for sloppy vetting of Cabinet nominees and tough confirmation battles, in a Senate where Republicans hold a slim 51-49 majority. Prior to Jackson’s nomination, Trump had told aides and outside advisers that he was fond of Jackson personally and was said to be particularly impressed with Jackson’s performance at the podium in January, when he offered a glowing report on the president’s physical and mental well-being.

“The White House does not vet their nominees. That leaves us as members having to look at their personal and leadership and other qualities, and they didn’t do a good job, and now we’re doing it,” said Sen. Patty Murray, D-Wash., a member of the Senate committee. She did not comment on the specific allegations against Jackson.

Sen. Susan Collins, R-Maine, who is not on the veterans’ panel, also criticized the White House vetting process, saying that the allegations against him arose after Trump nominated him. “I don’t know whether this is an aberration or not, but it certainly is something that bears looking into.” She said recent allegations of ethical violations in Oklahoma by EPA Administrator Scott Pruitt also raise questions about White House vetting.

Late Monday, Jackson was still pursuing support, and held a late-afternoon conference call with veterans’ groups from West Virginia and the state’s Democratic Sen. Joe Manchin, a member of the committee, whose vote could be vital for support.

Rounds said Jackson’s small staff at the White House will be an issue as he prepares to lead the VA.