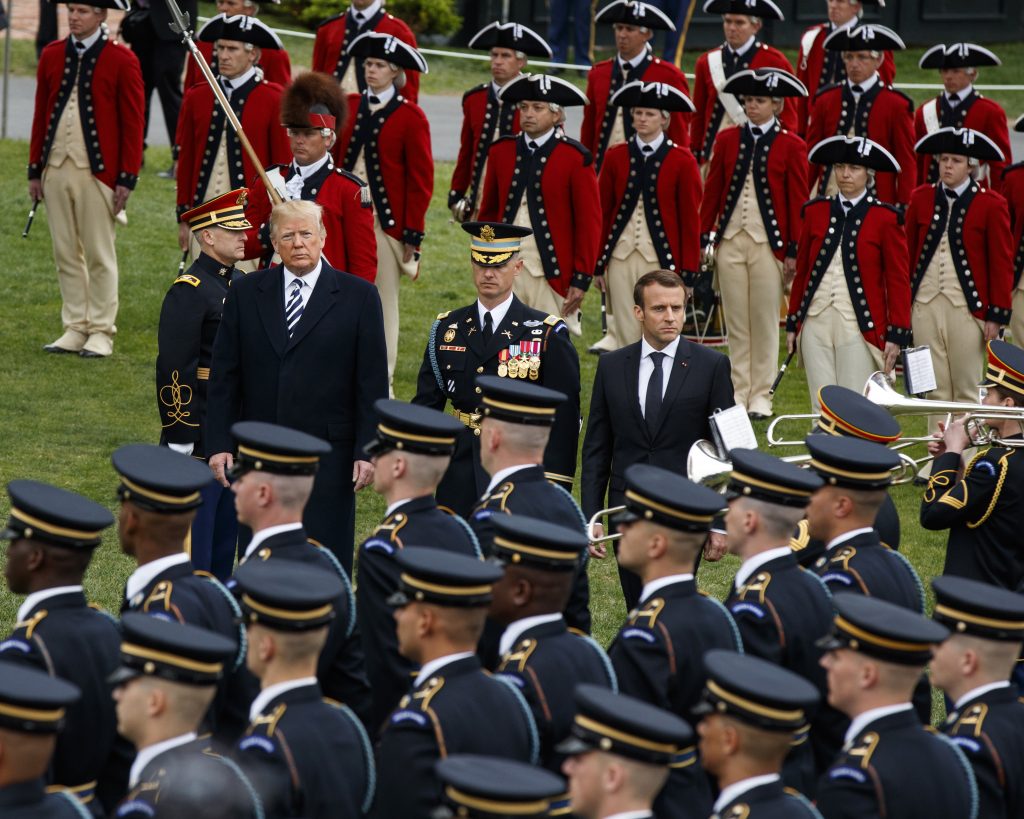 President Donald Trump and French President Emmanuel Macron pledged on Tuesday to seek stronger measures to contain Iran; but Trump refrained from committing to staying in a 2015 nuclear deal and threatened Tehran with retaliation if it restarted its nuclear program.

At a joint news conference with Macron, Trump kept up his blistering rhetoric against the nuclear accord between Iran and world powers that the U.S. president says does not address Tehran’s rising influence in the Middle East or its ballistic missile program. He called it insane, terrible and ridiculous.

“This is a deal with decayed foundations,” Trump said. “It’s a bad deal. It’s falling down.”

With a May 12 deadline looming for Trump to decide on restoring U.S. economic sanctions on Tehran, Macron said he spoke to Trump about a “new deal” in which the United States and Europe would address the outstanding concerns about Iran beyond its nuclear program.

Macron is using a three-day state visit to the United States, in a high-stakes bid to salvage the Iran nuclear deal, which many in the West see as the best hope of preventing Iran from getting a nuclear bomb and heading off a nuclear arms race in the Middle East.

Under Macron’s proposal, the United States and Europe would agree to block any Iranian nuclear activity until 2025 and beyond, address Iran’s ballistic missile program and generate conditions for a political solution to contain Iran in Yemen, Syria, Iraq and Lebanon.

It was unclear whether Macron made substantial progress in his efforts to prevent Trump from pulling out of the 2015 deal, and Trump stressed there would be repercussions should Iran restart its nuclear program.

“If Iran threatens us in any way, they will pay a price like few countries have ever paid,” Trump said.

But Trump said, “We will have a great shot at doing a much bigger, ‘maybe deal, maybe not’ deal.” The French believe that progress had been made.

“What was important and new this morning was that President Trump was OK with putting on the table, with France, the idea of a new agreement that should be proposed to and worked on with the Iranians,” a French official said.

It was unclear what this would mean for the fate of the 2015 accord, and whether the other countries such as China and Russia that signed it would agree to any new measures against Iran.

A source familiar with the internal debate at the White House said one option under discussion was giving Europe more time to toughen the current Iran deal’s terms.

Iran has said it will ramp up its nuclear program if the deal collapses, and a senior& Iranian official said on Tuesday that Tehran might quit a treaty designed to stop the spread of nuclear weapons if Trump scraps the agreement.

Trump and Macron have developed a remarkably strong relationship, at a time when many European leaders have kept a certain distance from Trump.

On Tuesday evening, the Trumps were to host the Macrons at the first state dinner conducted by Trump since he took power in January, 2017. Macron’s visit will be followed by one on Friday from German Chancellor Angela Merkel.

At one point Trump brushed dandruff from Macron’s suit coat, saying: “We have to make him perfect — he is perfect.”

Macron hopes to leverage their friendship into progress on not only& Iran,& but exempting Europe from steel tariffs, and protecting the 2016 Paris climate accord.

Their talks also covered the U.S. presence in Syria, weeks after the United States, France and Britain launched air-strikes in retaliation for a chemical weapons attack blamed on Syrian President Bashar al-Assad.

Trump wants to withdraw U.S. forces from Syria, believing that Islamic State terrorists are largely defeated, but Macron and other allies argue they should stay to ensure militants do not resurface, and to block& Iran& from strengthening its foothold there.

Macron urged Trump to keep U.S. forces in Syria for the time being.

Trump did not promise to leave the troops in Syria but made it clear they would not be withdrawn imminently.

“We want to come home. We’ll be coming home. But we want to leave a strong and lasting footprint,” Trump said.