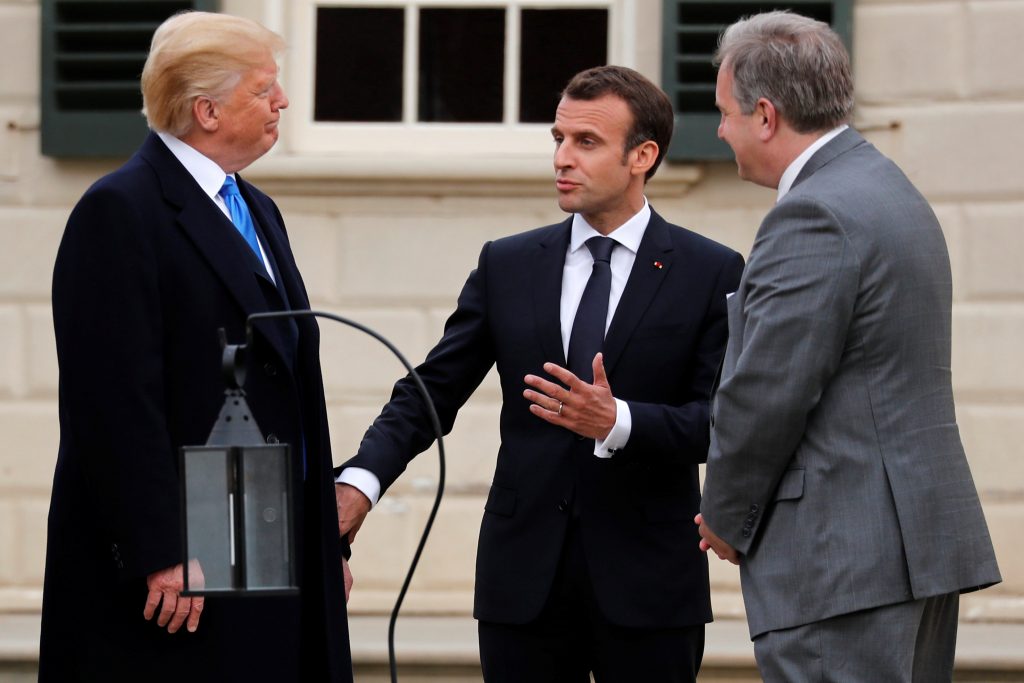 President Donald Trump treated French President Emmanuel Macron to a colorful welcome ceremony at the White House on Tuesday during a state visit that threatened to expose differences on Iran, trade and Syria between two close allies.

A 21-gun salute echoed across the South Lawn and a flute-playing fife and drum corps, in red-coated uniforms and tri-corner hats, marched by Presidents Trump and Macron and their wives, Melania Trump and Brigitte Macron.

The two leaders were then to launch into a morning of talks expected to include how to salvage the 2015 Iran nuclear deal, which Pres. Trump wants to withdraw the United States from unless European powers strengthen its terms.

In the evening, the Trumps are to host the Macrons at the first state dinner conducted by Pres. Trump since he took power.

European calls for exemptions from Pres. Trump’s plan for 25 percent tariffs on steel imports are also on their agenda, as well as the U.S. president’s desire to withdraw U.S. forces from Syria as soon as practicable.

Pres. Macron, whose visit will be followed by one on Friday from German Chancellor Angela Merkel, sees the Iran deal as the best available option to constrain Iran’s nuclear ambitions. He has called on Pres. Trump to keep troops in Syria for the time being to ensure the defeat of Islamic State terrorists.

Pres. Trump, in welcoming remarks, thanked France for joining with the United States and Britain in launching airstrikes in Syria earlier this month in response to a chemical weapons attack blamed on Syrian President Bashar al-Assad.

He said he and Pres. Macron had developed over the past year “a wonderful friendship” that is “a testament to the enduring friendship that binds our two nations.”

Pres. Macron, in his remarks, called for the two countries to work together against Islamist terrorists, on North Korea and Iran, on “free and fair trade,” and on climate change.

“It is together that we will counter the proliferation in weapons of mass destruction, whether it is in North Korea or in Iran,” Pres. Macron said.

He alluded to Pres. Trump’s withdrawal last year from the Paris climate accord, saying “we do not always agree on the solution,” but stressed “the fate of our children is at stake.”