National A Man Nearly Jumped Off an Overpass; 13 Truckers Made a Safety Net
National 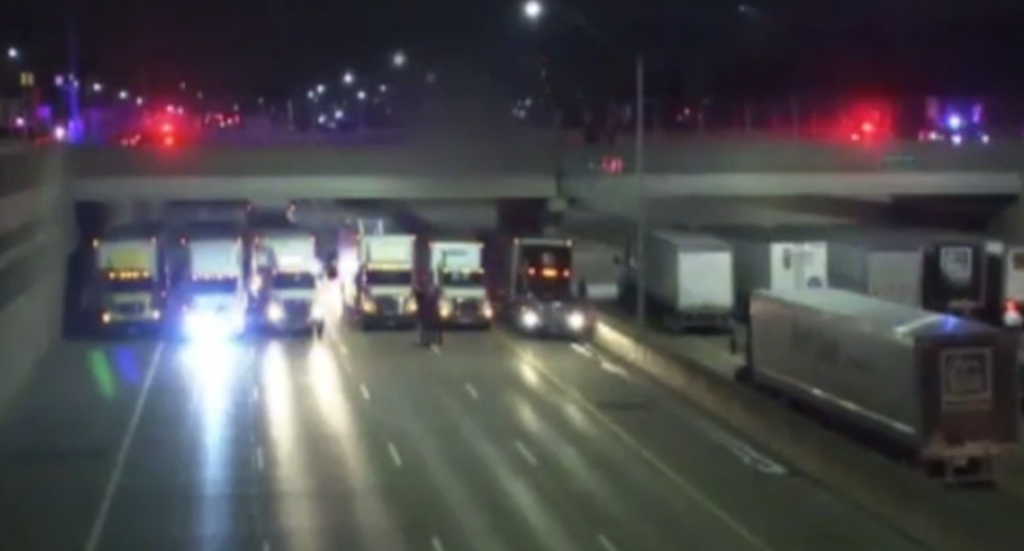 On a bridge overnight in northern Detroit, police said a man looked down at the midnight traffic on Interstate 696 and considered the fall.

It looked like more than a 20-foot drop from the photos. By the time the first officers got to the overpass – about 1 a.m., Fox 2 reported – the man was still there, deciding which way to go.

Police blocked off the lanes beneath the bridge, and negotiators started to talk to the man. They urged him, of course, to walk off the bridge and continue his life.

Below, the highway under the bridge was also closed in both directions, Fox 2 reported.

There was nothing unusual about any of this. It’s routine to shut down the roads when someone threatens to jump.

But at some point early Tuesday morning, while police continued to talk the man on the bridge, a semitractor-trailer rig crept past the barricade on the interstate and pulled to a stop directly beneath him.

A second rig joined it. Then another, and another. Onlookers started to film as they formed a sort of bridge beneath the bridge – a safety net of metal to break any fall.

Michigan State Police were organizing this, a lieutenant later told The Associated Press. It wasn’t the first time they used truckers to stop a suicide, he said, but it was unusual to see so many volunteers.

When the last 18-wheeler pulled up under the Coolidge Highway bridge sometime before sunrise, there were 13 of them in total. From one wall of the interstate to the other, it was nothing but rigs, their roofs just a few feet shy of the bridge.

The whole process took three or four hours, the AP wrote. By the end of it, the man who had once been alone with his thoughts had police on each side of him, talking to him, and a row of truckers sitting vigil below, refusing him his option to fall.

So the man, whoever he was, walked off the bridge and into a hospital, Fox 2 reported.

Police cleared out of the highway, and the 13 rigs and their drivers also went on their way. Any way but down.