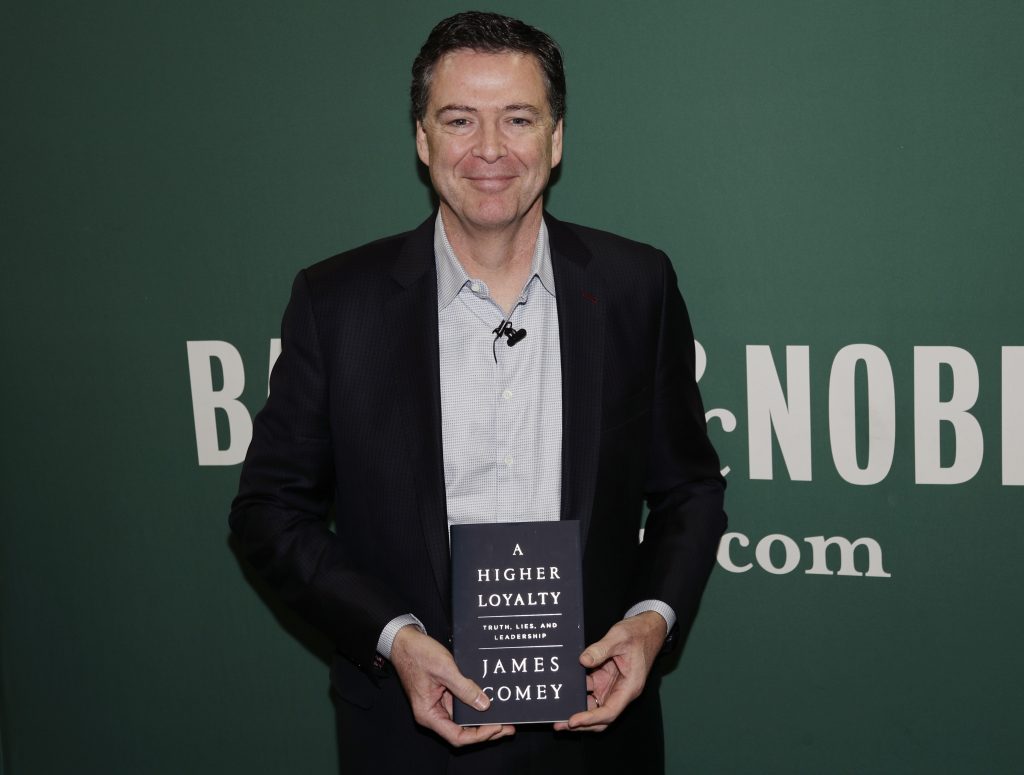 James Comey Jr., the former director of the FBI and author of a new book, truly stands out from the crowd.

Not only because the man is 6’ 8” tall. But because he may well be the most reviled person in American politics today.

In our grossly polarized society, most personalities on the political scene, even if only on the sidelines like Mr. Comey, are embraced by one squad and reviled by the other. Team mentality reigns, and the body politic is reduced to cheering or booing fans. Only face paint is missing.

And so it is something of an anomaly to observe a personality who is booed all around. Mr. Comey has achieved that status.

The Blue Team considers him (not unreasonably) to have played a part, perhaps a decisive one, in the defeat of Hillary Clinton in the 2016 presidential elections.

On October 26, 2016, two weeks before the presidential election, then-FBI director Comey learned that his agents had discovered a trove of emails on the computer of Huma Abedin’s husband, between the Democratic candidate and Abedin. Mr. Comey felt he had to inform Congress that the investigation into Mrs. Clinton’s use of private e-mail servers when she was Secretary of State was being reopened due to new information. He decided that to not reveal the new information would be misleading of Congress and the public.

Mere days before the election, he informed Congress that “Based on our review [of the new material], we have not changed our conclusions that we expressed in July.” That was when he had announced that the agency “did not find clear evidence that Secretary Clinton or her colleagues intended to violate laws governing the handling of classified information” but that “there is evidence that they were extremely careless in their handling of very sensitive, highly classified information.”

Speaking last week to comedian/political commentator Stephen Colbert about those actions, Mr. Comey admitted that he knew his decision would deeply upset “at least half of partisans,” but that “it never occurred to me we would [upset] all of them.”

But upset them all he did, and Mrs. Clinton famously went on to lose the election, further incensing her supporters. New York Times columnist Charles M. Blow recently referred to Mr. Comey as having “made reckless and harmful disclosures and proclamations about the Clinton investigation while not whispering a word about the concurrent investigation into the Trump campaign.”

Team Red, for its part, reviles Mr. Comey for whatever it was that made President Trump fire him last May; and now for his book, which is highly critical of the president.

What prompted the FBI head’s firing is not entirely clear. At first, Mr. Trump said the termination was on the recommendation of United States Attorney General Jeff Sessions and Deputy Attorney General Rod Rosenstein. Later he insisted he had made the decision on his own. The day after the firing, he told Russian Foreign Minister Sergey Lavrov and Russian Ambassador Sergey Kislyak that he had “just fired the head of the FBI. He was crazy, a real nut job” and added, “I faced great pressure because of Russia. That’s taken off.”

What is clear, though, is that Mr. Comey is not, to put it mildly, enamored of Mr. Trump, and doesn’t hide his feelings in his recent book. He likens the president to a mob boss, judges him “unethical and untethered to truth” and characterizes his leadership as “transactional, ego driven, and about personal loyalty.”

No way to win friends in Red America.

Maybe it’s my decades at Agudath Israel, over which time I regularly witnessed (and continue to witness) decisions made on high principle attacked from opposite corners. Maybe advancing age has tempered me, à la a poet’s declaration, “So goodbye cut and dried/Nice to have known you/But something went awry/And I’ve outgrown you.”

But, leaving aside the actual political issues, I can’t help feeling admiration for a man who does what he feels is right even if it means being booed by all the fans.