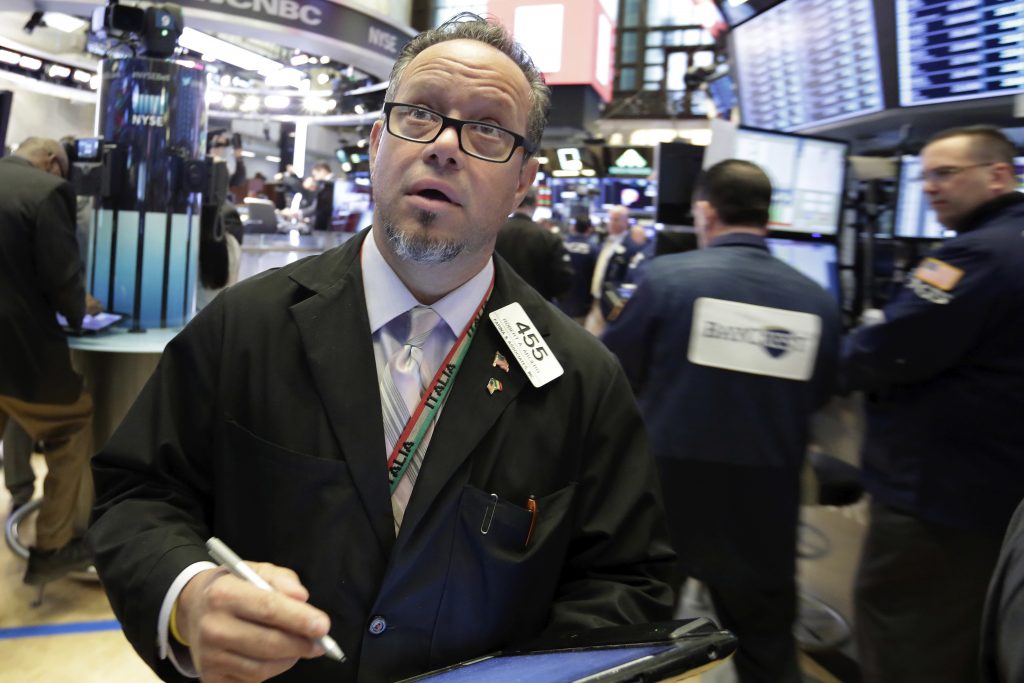 U.S. stocks are rising Monday with health-care and technology companies and retailers leading the way. Bond prices continue to fall and the yield on the 10-year Treasury note is getting close to 3 percent, a milestone it hasn’t reached since January 2014. Aluminum producers are sinking after the Treasury Department moved to ease sanctions against Russian aluminum company Rusal.

BONDS: Bond yields slipped again. The yield on the 10-year Treasury note continued to trade at four-year highs, rising to 2.98 percent from 2.96 percent. Bond yields have climbed this year as investors are starting to see signs that inflation is picking up and the Federal Reserve continues to raise interest rates. The 10-year yield stood at 2.43 percent at the end of 2017.

Since the global financial crisis in 2008-09, a combination of low inflation expectations and a bond-buying program by the Federal Reserve have kept bond yields low. That made bonds less appealing to investors and helped push stocks higher. With the Fed no longer buying bonds and expectations of inflation increasing, analysts say higher yields could make bonds more attractive, which could affect stock prices.

ALUMINUM FOILED: The Treasury Department extended a deadline for U.S. companies to stop doing business with Rusal, and also said it could change its stance on sanctions against the company if billionaire businessman Oleg Deripaska gives up control. Earlier this month the U.S. imposed sanctions barring citizens from doing business with numerous Russian businessmen, including Deripaska, as well as several Russian officials and companies. That followed U.S. frustration with Russian policy in Syria and Ukraine, as well as alleged election interference.

GETTING TOGETHER? Utility Vectren gained 6.3 percent to $69.71 after it accepted an offer from rival CenterPoint Energy worth almost $6 billion, or $72 a share. The combined company will have 7 million gas and electricity customers in eight states. Houston-based CenterPoint has natural gas operations in Arkansas, Louisiana, Minnesota, Mississippi, Oklahoma, and Texas. It delivers electricity in the Houston area. CenterPoint fell 2.5 percent to $26.03.

Offshore drilling platform maker McDermott International jumped 12.6 percent to $6.81 after it said it rejected an offer from Subsea 7 SA. Earlier this year it accepted a bid from Chicago Bridge & Iron valued at $6 billion.

Bloomberg reported that Walmart is close to buying a majority stake in Indian e-commerce company FlipKart for $12 billion. Walmart dipped 0.6 percent to $86.50.

SPLITTING UP: Sears’ largest shareholder asked the struggling retailer to sell the Kenmore brand and its home improvement business. ESL Investments, the hedge fund run by Sears CEO Eddie Lampert, said it might buy those assets.

Sears has been closing stores, cutting costs and selling brands as its sales fall. The company acknowledged that it received ESL’s request and its stock rose 4.1 percent to $3.13.

Health-care products company Henry Schein jumped after it said it will spin off its animal health business. That division will combine with Vets FirstChoice as a new publicly traded company, and Henry Schein expects to get at least $1 billion in cash from the tax-free move. The stock gained 6.8 percent to $73.75.

MISFIT TOYS: Hasbro said its revenue plunged 16 percent in the first quarter, a far bigger decline than Wall Street expected, as toymakers continue to struggle following the demise of Toys R Us. Hasbro said it took a loss over the last three months. The stock fell in early trading, as did rival Mattel, but after months of losses for both stocks, investors found reasons for some optimism. Hasbro gained 2.9 percent to $85.23 and Mattel rose 3.7 percent to $13.44.

COMMODITIES: Energy companies lagged the rest of the market as benchmark U.S. crude dropped 38 cents to $68.02 a barrel in New York while Brent crude, used to price international oils, slid 17 cents to $73.89 per barrel in London. Gold and silver prices tumbled. Gold fell 1 percent to $1,324.30 an ounce and silver fell 3.1 percent to $16.63 an ounce.