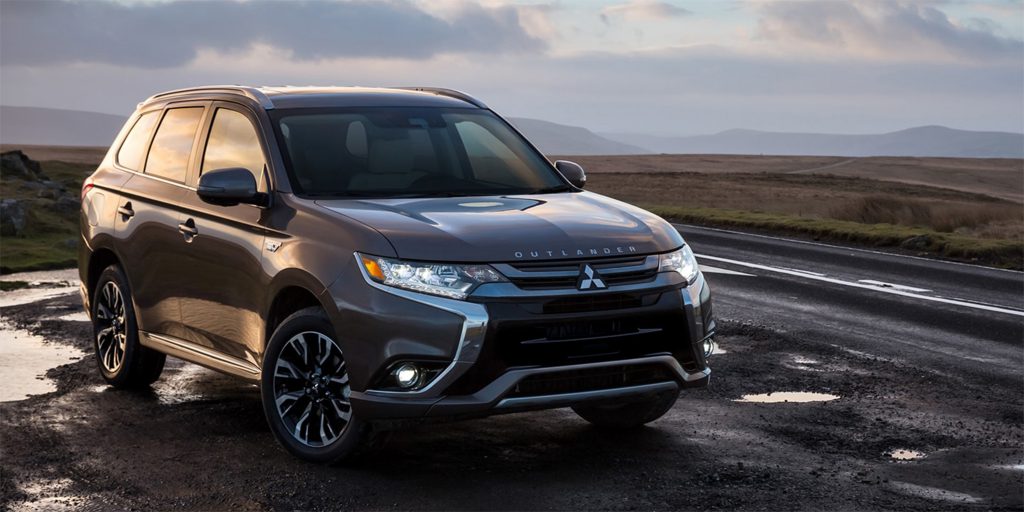 For a company nearly left for dead two years ago, Mitsubishi is showing a lot of life.

The Outlander plug-in hybrid on sale now introduces a hot new technology to the compact SUV segment that’s taking the market by storm. Outlander plug-in is a five-seat SUV that’s about the size of the Chevrolet Equinox, Nissan Rogue and Toyota RAV4.

The Outlander feels so much like the perfect vehicle for the times; it’s hard to believe it was little Mitsubishi that it came up with the concept of a plug-in hybrid SUV, not a multimillion-dollar-selling brand such as Chevrolet, Ford, Toyota or Volkswagen.

Plug-in hybrid vehicles, or PHEVs, are vehicles — like the Chevrolet Volt — that have batteries to carry them some distance and gasoline engines to provide the range for longer trips. Outlander PHEV has an EPA-rated 22-mile range — which it exceeded in our testing — on fully charged batteries and a total of 310 miles when its 2-liter gasoline engine kicks in after the batteries are drained.

You can select an EV-only mode that shuts out the engine or allows the engine to turn on and off as needed, depending on conditions. You can also set a charging mode that allows you to top off the battery from the gasoline engine, or choose to minimize electric power, saving it for when you get to congested urban areas where it’ll do you the most good.

Mitsubishi won’t provide the total power the hybrid system produces. One thing is certain: It’s 277 horsepower, but it lacks the oomph you might expect if you added the gasoline engine’s output to the two electric motors. Acceleration is not impressive. It feels closer to the 160 horsepower available from the electric motors alone.

The plug-in is almost unnervingly quiet when you’re driving in EV mode. There’s nearly no road noise trundling along surface streets at up to 45 miles per hour.

All Outlander plug-in hybrid vehicles have a lithium-ion battery; charging ports for 120, 240 or 440 volts, and all-wheel drive. While the Outlander’s smaller batteries reduce its cruising range, they also reduce charging time. It takes 3.5 hours to fully charge the batteries with a 240-volt connection.

Mitsubishi says an Outlander can get an 80 percent charge in 25 minutes from one of the less-common DC fast chargers. A full charge from a residential 120-volt outlet takes eight hours.

Outlander’s all-electric mode consistently exceeded its EPA-rated 22-mile range on a charge when I drove the SUV in stop-and-go traffic on surface streets.

The interior is roomy and comfortable. The instruments are big and clear, and the audio and climate controls have easy-to-use buttons and dials.

The non-hybrid Outlander has three rows of seats and can accommodate seven. The PHEV seats five; the battery and rear electric motor take up space under the floor that squeezed out the third row.

The lithium-ion battery pack and rear-axle electric motor take up a lot of space under the rear floor, creating a cargo area that’s smaller than most competing compact SUVs.

Overall, Outlander plug-in has a lot of technology from a company such as Japan’s Mitsubishi, which got a new lease on life when the Renault-Nissan alliance rescued it from near-certain bankruptcy in October 2016.

The fact that the company developed a sophisticated and unique vehicle such as the Outlander PHEV with the meager resources it had before joining the alliance is reason for optimism. Now that Mitsu is part of the world’s largest automaker, there’s no telling what it may do.

Chevrolet is expected to add a PHEV version of its Equinox compact SUV in a year or so. It will be a disappointment if the new Toyota RAV4 that goes on sale later this year didn’t also offer a PHEV model.

Until then, the Outlander PHEV stands alone.

Space: Not quite as much as an SUV without a plug

What? A five-seat SUV that gets electric-only range, then runs on gas.

When? On sale now.

Where? Made in Okazaki, Japan.

What makes it go? A 2-liter 4-cylinder engine and two electric motors.

How thirsty? 22 miles of range on its batteries, then it runs on gas. It gets 25 miles per gallon on average when running on gas alone.

Overall: A great idea, having all the practicality of an SUV with the thrift that goes with being able to drive much or all of a daily commute on electricity alone.