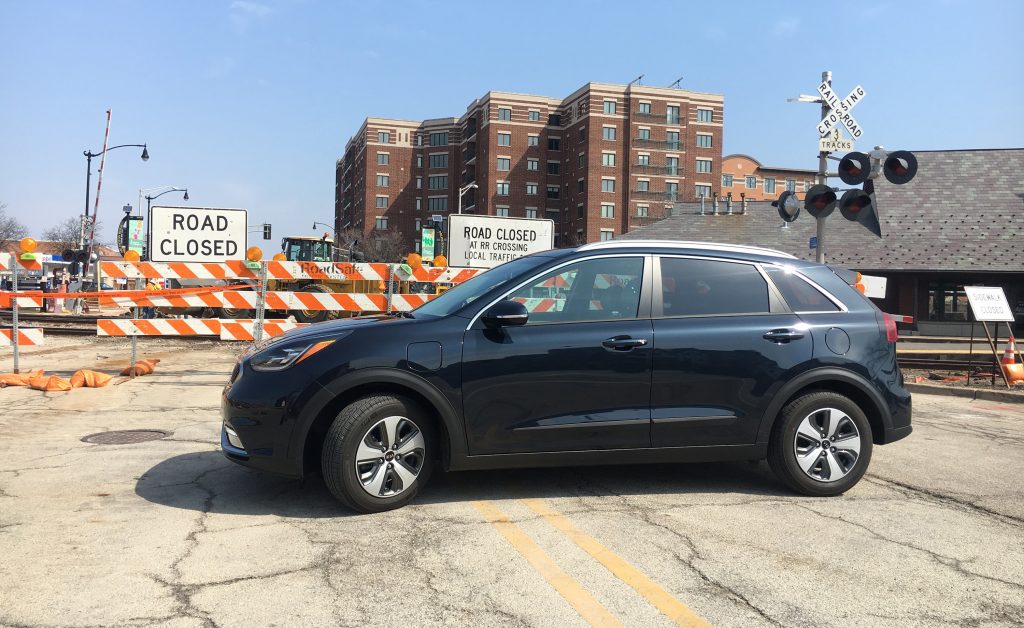 The Kia Niro compact crossover hybrid launched last year gets a plug for 2018, as well as a much larger motor and a whole lot more emission-free driving.

Despite debuting in a down market for hybrids, the Niro did pretty well in its first year, nearly tripling sales of its closest competitor, the Toyota Prius V wagon. New for 2018, the plug-in Niro comes at an equally tough time due to low gas prices, demand for large vehicles and the slow-but-inevitable market acceptance of powertrains of the future.

There are only a few compact crossover plug-ins and electrics, including the BMW i3, Chevy Bolt EV, and the forthcoming Volvo XC40 PHEV. Niro stands out as being more affordable, and more like a normal car for interested but hesitant consumers looking for a charge.

Niro is quirky in the Kia way, more like the Soul than the Prius family, which is a good thing. Nothing about the exterior announces its eco-cred, yet it is handsome enough to stand out in a market awash in small crossovers.

It gives up no space from the hybrid version due to the discreet and clever placement of the 8.9 kWh battery pack beneath the rear seat. Our bulbous hockey bag and pads fit in back with three rear-seat riders, but the stick had to ride in the middle. Headroom is better than legroom in the back seat — not unlike the Soul — we fit five consistently though it’s not something you’d road trip in with all the roommates.

Like the hybrid, the plug-in Niro averages 46 mpg combined thanks to an efficient 1.6-liter four-cylinder engine. The $6,000 upcharge for the plug-in combines the engine and a 60-horsepower motor in a dance of efficiency. The difference is the 26-mile all-electric range, which is plenty for most daily driving, but without tailpipe emissions.

On our 30-mile commute downtown, done mostly under battery power, we averaged 150 mpg. It was cold during our unspring Midwestern spring, so the heating unit required engine power, which is different than other PHEVs.

Any aggressive throttle input also awakens the engine. Slamming the accelerator will cause a split-second delayed shift in power as the engine kicks on. It’s not unlike turbo lag, but without the turbo boost. Other plug-ins are quicker and more seamless. It’s not quick, even in all-electric mode, but that’s not really the point.

For more spirited driving, simply shift the gear stick into “sport” mode and the six-speed dual clutch transmission takes over. Nearly every other PHEV uses an electronic continuously variable transmission, but those have the downside of loud engine drone and an expectation for gear shifts that won’t come. The Niro is quieter by comparison and lets the pilot have some input on how it drives.

The steering is vague, and the handling is compromised by low resistance rolling Michelin Energy Saver Green X tires. They’re designed for efficiency and don’t provide the kind of grip most Midwesterners would expect in winter, even from front-wheel drive. Winter tires would be an easy fix, and could perform as well as, if not better than, all-wheel drive in wintry conditions.

Another thing the Niro lacks is variable regen braking settings, so it is a very mild plug-in hybrid, which also might appeal to consumers hesitant to shift to a plug.

The interior controls and display are high-end, and even though the steering wheel is studded with buttons, it is all very intuitive and easy to use. We particularly appreciated the energy display and the different submenus to access energy use.

Niro PHEV qualifies for a $4,543 federal EV tax credit so it can be had well-equipped for just under $30,000 before taxes and fees. It made a more lasting positive impression than the hybrid because of how little fuel we used and how much it felt like a normal car. In this sense, it is a crossover of two kinds — both tall hatch and good car for consumers crossing over into electric powertrains.