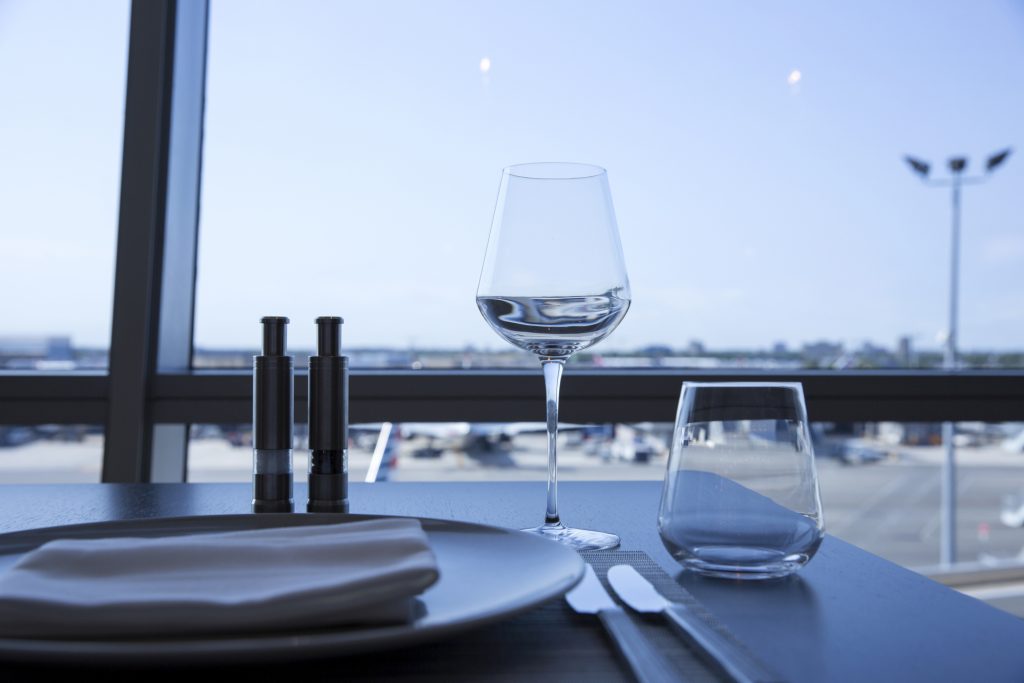 There are many depictions of a future in which we’ve mastered the art of manipulating the opacity of glass. Even in real life, sunglasses can adapt to the intensity of sunlight. So why, one might ask, can’t we have that in our homes, or at work?

The wait may soon be over. The tinted world of tomorrow is coming, and airports, mini-cities of steel, concrete and lots and lots of glass, are interested. In a test last fall, Dallas-Fort Worth International Airport outfitted one of its gates with a new type of “smart glass” that can adjust for sunlight exposure. The obvious point is to keep travelers from getting overheated, but the exercise also brought a more lucrative benefit.

The test was designed to see if the product, called View Dynamic Glass, might improve passenger satisfaction along a small stretch of terminal real estate, specifically, gate seating at A28 and a burger restaurant’s east-facing bar, one regularly torched by the Texas sun.

The lesson was clear for the airport: Remove heat and glare from a glass-ensconced bar and people will dally longer, spending more.

For years, airport executives have analyzed the links between travelers’ impressions and their spending, with terminal “dwell time” the critical link: People tend to hustle through New York’s dreaded LaGuardia as rapidly as possible while lingering in acclaimed venues such as those in Seoul, Singapore and Munich. Travelers who are relaxed after emerging from security tend to spend more money while waiting for their flights. As the fourth-busiest U.S. airport, DFW could benefit from this dynamic, its officials concluded.

“We definitely see the impact,” said Casey Norton, a DFW Airport spokesman. The restaurant had approached the airport about its lagging sales, he said, and “they hypothesized that it was too … hot” for customers to stick around.

The technology is intended to reduce light by activating internal shading and, by extension, reducing the ambient temperature. It works somewhat like the windows on a Boeing 787 Dreamliner; a button to lower or raise opacity.

“We spend 90 percent of our time indoors,” said Rahul Bammi, View’s chief business officer. “The things that really matter are light, air quality, temperature and sound. We impact at least three of those in a positive way.”

The study at DFW, conducted by a Cornell University design professor, also found that surface temperatures on seats and carpeting near the new gate glass were 10F to 15F lower, boosting dwell time by 53 percent over that at a nearby gate with regular glass. Spending around the cooler gate rose as well.

With their long warrens of glass walls, airports may seek to bolster revenues with this technology. View was, unsurprisingly, eager to help in the DFW experiment. “People have been studying green buildings for 50 years but there’s never been a comprehensive study on dynamic glass,” Bammi said.

The additional revenue may come at exactly the right time for America’s airports. Such glass could boost food and retail sales at a time when airports have been taking a financial hit. The rapid adoption of ride-sharing services has dented parking revenues, a massive source of cash for airports. Parking and ground transport accounts for about 40 percent of North American airport revenues, while spending on food and beverages is the fastest-growing portion of their concessions business, according to the most recent survey by Airports Council International-North America.

The glass has been purchased by various companies and schools, such as Boston Logan Airport; Delta Air Lines (for a lounge at the Seattle airport); Duke University; FedEx Corp., Levi’s Stadium, LinkedIn Corp.; and Wells-Fargo & Co.

San Francisco International Airport is spending $3 million for View’s electrochromatic glass in the $2.4 billion overhaul of Terminal 1. In coming weeks, DFW plans to solicit bids for about 500,000 square feet of such glass to use in gate and concession areas with sun exposure.

Airports are just one of several markets “smart glass” makers are targeting. Beyond addressing human comforts, View pitches its glass to developers and others as a tool to lower heating and cooling costs by as much as 20 percent. Even with installation costs that are 20 percent to 30 percent higher than traditional glass, the expected energy savings over a building’s life make the choice “a no-brainer” for many commercial projects, Bammi said.

Customer awareness of such glass products is slowly growing, but most people don’t realize that the construction industry has begun adopting such glass, Bammi said. “The most common response we get is, ‘Why didn’t someone think of this before?'” he said.