National Shooter on the Run After Killing 4, Wounding 4 in Nashville Waffle House
National 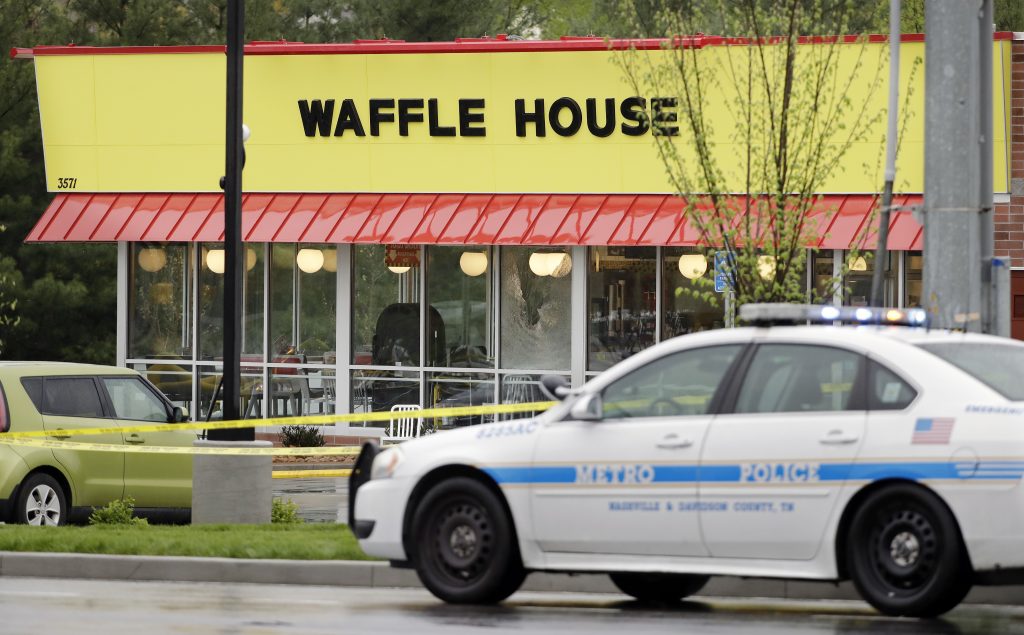 A gunman stormed a Waffle House restaurant in Nashville early Sunday, shooting four people to death before a customer rushed him and wrestled away his assault rifle.

Authorities were searching for the 29-year-old suspect, Travis Reinking, who they said drove to the busy restaurant and killed two people in the parking lot before entering and continuing to fire. When his AR-15 rifle either jammed or the clip was empty, the customer disarmed him in a scuffle. Four people were also wounded before the gunman fled.

Nashville Police Chief Steve Anderson said there was no clear motive, though Reinking may have “mental issues.” He may still be armed, Anderson told a mid-afternoon news conference, because he was known to have owned a handgun that authorities have not recovered.

The AR-15 used in the shooting and the handgun were among four firearms that authorities took from Reinking after U.S. Secret Service agents arrested him last July for being in a restricted area near the White House, officials said. Special Agent Todd Hudson said Reinking was detained after refusing to leave the restricted area, later explaining he wanted to meet President Donald Trump.

State police in Illinois, where Reinking lived until last fall, revoked his state firearms card at the request of the FBI and the four guns were taken from him, authorities said. Nashville Police spokesman Don Aaron said the guns were returned to his father, who told authorities on Sunday he had given the weapons to his son.

Authorities hailed the customer who intervened to stop a further bloodbath, 29-year-old James Shaw, Jr., as a hero — though the father of a 4-year-old girl demurred and said he was just trying to survive.

Shaw told reporters he first thought the gunshots fired around 3:25 a.m. were plates falling from a dishwashing station.

He said when he realized what was happening, he took cover behind a door as shots shattered windows. The gun either jammed or needed a new clip, and that is when Shaw said he pounced after making up his mind that “he was going to have to work to kill me.”

They cursed at each other as they scuffled, Shaw said, and he was able to grab the gun and toss it over a counter. The gunman then ran away into the dark of the working- and middle-class Antioch neighborhood of southeast Nashville.

Authorities said he shed his jacket nearby and police found two AR-15 magazines loaded with bullets in the pockets. Witnesses said they later saw him walking on a road, and then at his apartment.

Chuck Cordero, a witness to the shooting, told The Tennessean newspaper that he had stopped to get a cup of coffee and was outside the Waffle House when the chaos unfolded.

“He did not say anything,” Cordero said of the gunman, whom he described as “all business.”

Cordero said Shaw saved lives. “There was plenty more people in that restaurant,” he said.

The dead were identified as 29-year-old restaurant worker Taurean C. Sanderlin, and 20-year-old restaurant patrons Joe R. Perez, 23-year-old Akilah Dasilva and 21-year-old Deebony Groves. A police statement said Sanderlin and Perez were killed outside the restaurant, Groves was fatally shot inside, and Dasilva was critically wounded inside and later died at Vanderbilt University Medical Center.

Aaron, the police spokesman, said two of the wounded were being treated for gunshot wounds at the medical center, where spokeswoman Jennifer Wetzel said one was in critical condition and the other was in critical but stable condition.

Aaron said Reinking lived near the restaurant, and police used yellow crime scene tape to block public access to an apartment complex about a half-mile from the Waffle House. Reinking is originally from Morton, Illinois.

“This is a very sad day for the Waffle House family,” the company said in a statement on Twitter. “We ask for everyone to keep the victims and their families in their thoughts and prayers.”

Nashville Mayor David Briley described the shooting as “a tragic day” for the city.

“My heart goes out to the families & friends of every person who was killed or wounded,” Briley said in an emailed statement. “I know all of their lives will be forever changed by this devastating crime.”

U.S. Rep. Jim Cooper, whose district includes Nashville, said in an emailed statement that the shooting shows the need for tighter restrictions on “widespread civilian access to military-grade assault weapons.”