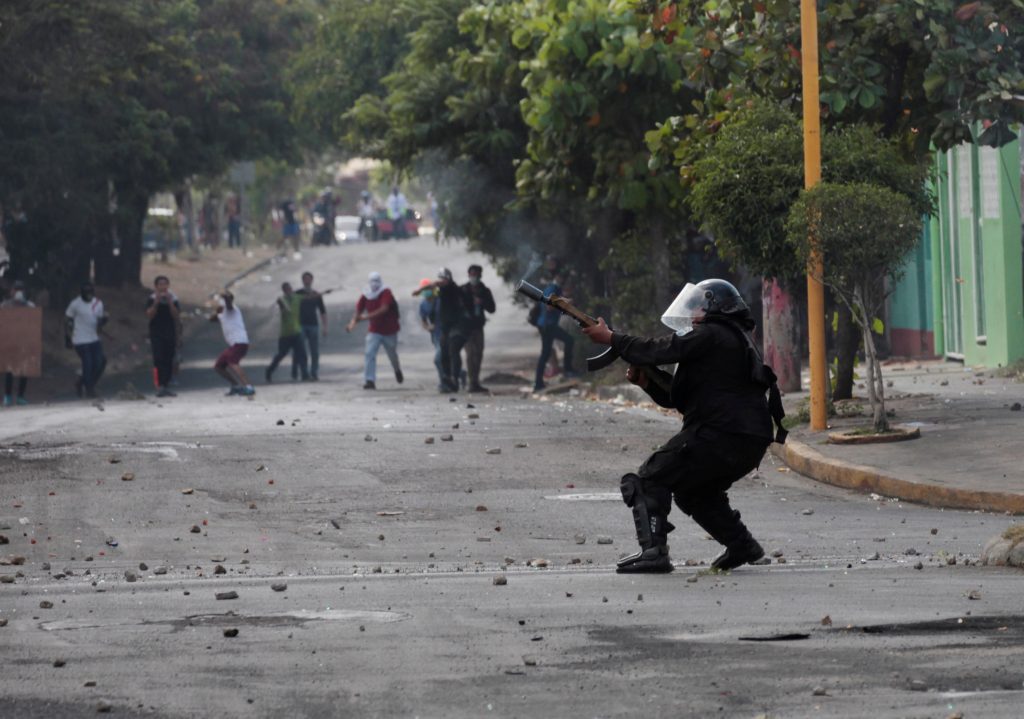 Nicaraguan President Daniel Ortega said Saturday that his government is willing to enter into talks over social security reforms that have sparked four days of protests and clashes in which, rights monitors say, at least 25 people have died. A journalist covering the unrest was also killed.

In a nationally broadcast address, his first public appearance since the demonstrations began Wednesday, Ortega said he is open to negotiations so that there is “no more terror for Nicaraguan families.”

But he said the dialogue would be just with business leaders and not with other sectors of society. He also seemed to try to justify what has been a heavy-handed response by the government and allied groups, accusing demonstrators, most of them university students, of being manipulated by unspecified “minority” political interests and of being infiltrated by gangsters.

“What is happening in our country has no name. The kids do not even know the party that is manipulating them. … Gang members are being brought into the kids’ protests and are criminalizing the protests. That is why they are put at risk,” Ortega said.

Those remarks appeared to fan the flames, as soon afterward thousands of people spilled back into the streets in seven cities including the capital, Managua, after tensions had calmed somewhat Friday night.

“We are in the streets asking for Ortega and his wife to go. This has already gone beyond the social security issue. Here there have been dead, wounded, and he does not even apologize for his killings or the savage repression against the people,” said Mauri Hernandez, one of thousands of demonstrators at a central rotunda.

Minutes later, news emerged that journalist Angel Gaona of the news show Meridiano was killed while covering unrest in the southeastern city of Bluefields. The AP viewed video from when he was broadcasting live on social media via cellphone; a gunshot is heard and the phone falls.

Another Bluefields reporter, Ileana Lacayo, said he died en route to the hospital.

A prominent business chamber issued a statement conditioning its talks with Ortega on an end to repression, the freeing of detained protesters and respect for freedom of expression as the authorities have kept off the air one private news channel that is covering the protests.

“We cannot go into a dialogue if these minimal conditions are not met,” it said.

There were more clashes at the Polytechnical University of Nicaragua, one of the strongest bastions of the protesters.

“We stand firm. They will not wear us out. Here we will give our all until the government understands that it will not continue to do whatever it pleases,” Lombardo Ruiz Picado, a leader of the student protesters, told The Associated Press by phone from inside the school.

In the morning, army troops were deployed to Esteli, a city north of Managua that has been a main flashpoint of the demonstrations, to help police repel protesters.

The Roman Catholic Conference of Bishops in Nicaragua condemned repression against protesters and urged the government to listen to them and drop the social security reforms.

“A unilateral decision always brings with it social instability. Rectifying decisions is a sign of humanity, listening is the path of reason, seeking peace at all cost is wisdom,” the conference said in a statement.

The reforms, issued by decree, increase income and payroll taxes and make changes to pensions to try to shore up Nicaragua’s troubled social security system.