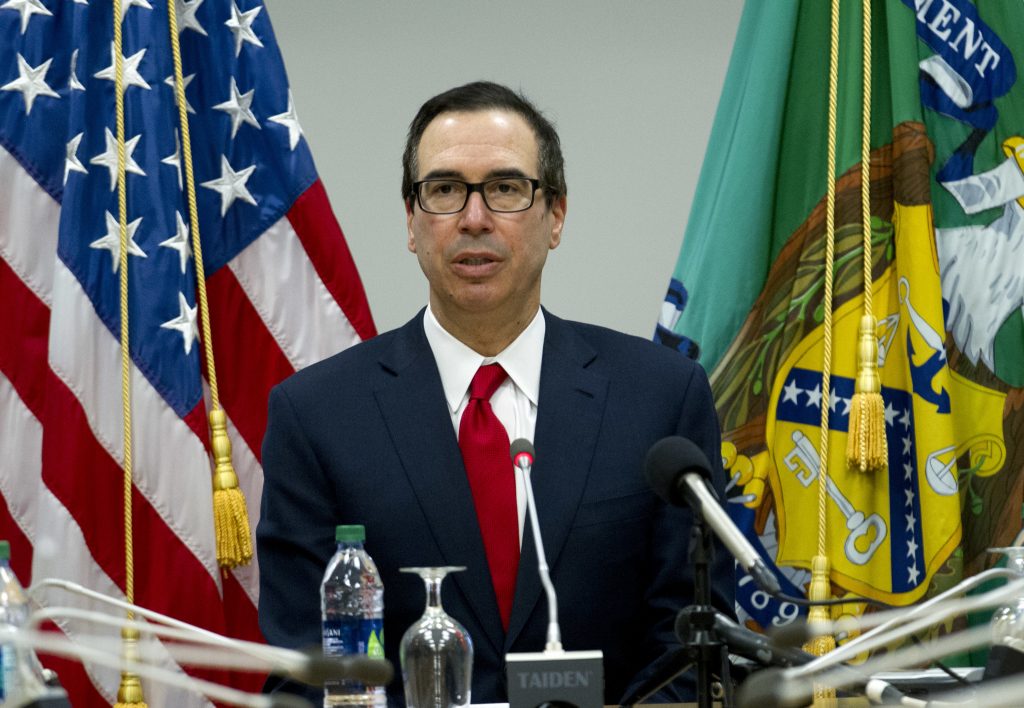 Mnuchin held a string of meetings over the past three days with financial officials from China, Japan and Europe over the punitive tariffs the administration has unveiled in an effort to fulfill President Donald Trump’s campaign promise to reduce America’s huge trade deficits.

In a session with reporters, Mnuchin refused to say how close the United States was to resolving the various trade disputes but did indicate progress was being made in the talks.

In his discussion with Chinese officials, Mnuchin said the two sides covered the proposals that Chinese President Xi Jinping has made to open the Chinese market. “We are cautiously optimistic,” Mnuchin told reporters, saying that he may soon travel to Beijing for further talks with the Chinese.

The United States and China are on the brink of what would be the biggest trade dispute since World War II. The US and China have proposed imposing tariffs of $50 billion on each others’ products and Trump is looking to impose tariffs on up to $100 billion more of Chinese goods.

The rising trade tensions dominated the three days of talks among top finance officials attending meetings of the Group of 20 major economies, the 189-nation International Monetary Fund and its sister lending agency, the World Bank.

The US get-tough trade approach was roundly criticized by many countries at the finance meetings but Mnuchin insisted that the United States was not trying to provoke a global trade war but simply achieving a more fair system for American workers.

“The president has been very clear on what our objectives are,” Mnuchin said. “”We are looking for reciprocal treatment. This is not about protectionism.”

While the administration’s America First approach rankled other nations, Mnuchin did announce a change in position with the World Bank, one of several multilateral institutions that Trump officials have criticized in the past. Last year, the administration said it was opposed to what would be the first increase in the World Bank’s capital resources since 2010.

But on Saturday, Mnuchin said the United States had dropped its opposition and would support the increase as part of a package of lending reforms.

The proposal, which was approved late Saturday by the World Bank’s policy committee, would provide the World Bank with a $13 billion increase in lending resources. The increase in capital was tied to a package of World Bank reforms in how loans are awarded.

Both the World Bank and IMF held meetings of their policy committees on Saturday. In a closing communique, the IMF expressed concerns that the rising trade tensions could dim what at the moment are bright prospects for the global economy, which is expected to grow this year at the fastest pace since 2011.

“Trade tensions are not to the benefit of anyone,” said Lesetja Kganyago, who leads the policymaking committee and is governor of the South African Reserve Bank. “If there is a trade conflict, there could never be winners. We could all only be losers.”

On Friday, Mnuchin had called on the IMF to do more to police countries running large trade surpluses, a role that has traditionally been left to the Geneva-based World Trade Organization. While many IMF member countries would object to such a broadening of the IMF’s powers, the final communique did state, “We will work together to reduce excessive global imbalances in a way that supports global growth.” The communique did not spell out how this would be accomplished.

The IMF communique did list a series of threats to the current global upturn and finance officials pledged to work cooperatively.

In his speech to the IMF’s policy committee Saturday, Yi Gang, the head of China’s central bank, said that global growth could be hurt by “an escalation of trade frictions caused by unilateral actions,” an obvious reference to America’s threatened tariffs against China.