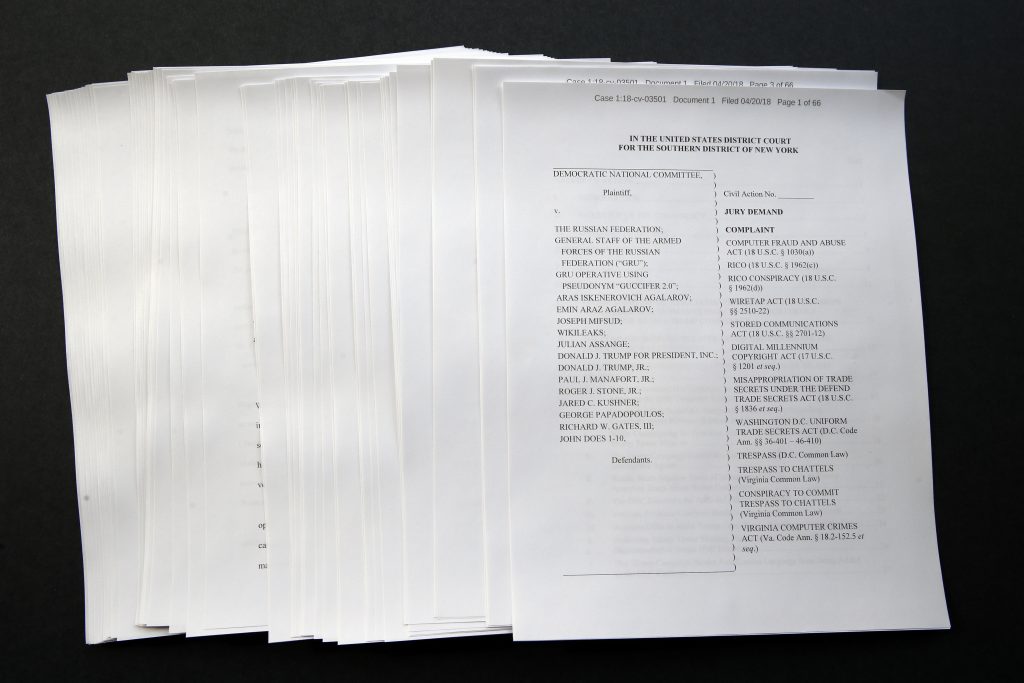 A lawsuit by Democratic Party accuses Donald Trump’s presidential campaign, Russia, WikiLeaks and Trump’s son and son-in-law of engaging in a conspiracy to undercut Democrats in the 2016 election by stealing tens of thousands of emails and documents.

The lawsuit filed Friday in Manhattan federal court seeks unspecified damages and an order to prevent further interference with computer systems of the Democratic National Committee.

“During the 2016 presidential campaign, Russia launched an all-out assault on our democracy, and it found a willing and active partner in Donald Trump’s campaign,” said Tom Perez, the DNC chairman, in a statement. He called it an “act of unprecedented treachery.”

The Democrats accuse Trump and his associates of trading on relationships with Russian oligarchs tied to President Vladimir Putin and of collaborating with Russia as it worked to undermine Democratic nominee Hillary Clinton.

The president has said repeatedly there was no collusion between his campaign and Russia. On Friday, his campaign scorned the lawsuit as “frivolous” and predicted it would be quickly dismissed.

“This is a sham lawsuit about a bogus Russian collusion claim filed by a desperate, dysfunctional and nearly insolvent Democratic Party,” Trump campaign manager Brad Parscale said in a statement.

He said the campaign would seek to turn the tables on the Democrats, using the legal discovery process to try to pry documents from the DNC including any related to a dossier detailing allegations of links between Trump and Russia. The dossier, a collection of memos, was written by an ex-British spy whose work was funded by Clinton and the DNC.

Trump himself tweeted that the DNC lawsuit could be “very good news,” saying his campaign “will now counter for the DNC Server that they refused to give to the FBI” as well as Hillary Clinton’s emails.

The spokeswoman for Russia’s Foreign Ministry, Maria Zakharova, said in a statement Saturday that media reports on the suit indicate that “it seems to be a distinct attempt of the Democrats to make excuses for their defeat.”

The legal challenge, she said, is a Democratic attempt “to give new breath to internal political dismantling and to further heat up anti-Russian sentiments.”

The Democrats’ lawsuit doesn’t reveal new details in the sprawling storyline of connections between the Trump campaign and Russian operatives working on behalf of the Kremlin.

Instead it knits many of the threads that have emerged in public over the past two years to paint a picture of an alleged conspiracy between the Trump campaign, the Kremlin and WikiLeaks founder Julian Assange.

The DNC says the “brazen attack on American democracy” began with a cyberattack on DNC computers and phone systems in 2015, allowing the extraction of tens of thousands of documents and emails. WikiLeaks then blasted out many of the documents on July 22, 2016, shortly before Clinton was to be nominated — upsetting the Democrats’ national convention.

That added up to a “campaign of the presidential nominee of a major party in league with a hostile foreign power to bolster its own chance to win the presidency,” the DNC lawyers wrote.

That conspiracy violated the laws of the U.S., Virginia and the District of Columbia, the lawsuit says, and “under the laws of this nation, Russia and its co-conspirators must answer for these actions.”

The DNC accuses Donald Trump Jr. of secretly communicating with WikiLeaks, and blames the president, too, saying he praised the illegal dissemination of DNC documents throughout fall 2016, making it a central theme of his speeches and rallies.

The DNC also fingers Trump son-in-law Jared Kushner as a co-conspirator for his role overseeing the Trump campaign’s digital operation.

WikiLeaks responded to the lawsuit caustically.

“DNC already has a moribund publicity lawsuit which the press has become bored of–hence the need to refile it as a ‘new’ suit before midterms,” the group said in a tweet. “As an accurate publisher of newsworthy information @WikiLeaks is constitutionally protected from such suits.”

Mueller also has indicted 13 Russian individuals working for the Internet Research Agency accused of running an elaborate scheme to meddle in the U.S. elections. The indictment alleges one of Putin’s close allies, Yevgeny Prigozhin, oversaw the effort.

The hacking of the DNC has long been a sore spot for Democrats across the board since Clinton’s stunning loss in November 2016. The hack and subsequent release of the emails hit the party just before it formally nominated Clinton, and the emails remained a major issue through Election Day.

This is the second time in recent history that the DNC has sued a Republican president.

The Democrats sued Richard Nixon’s Committee to Re-elect the President in 1973, following the break-in at the DNC’s Watergate Hotel headquarters.