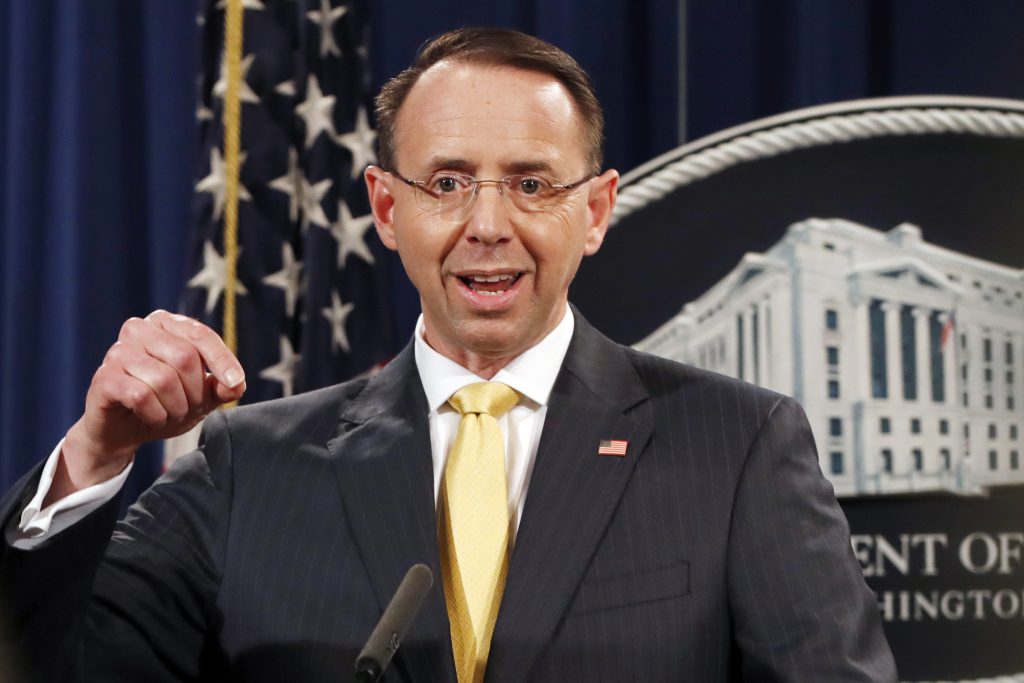 Deputy Attorney General Rod Rosenstein told President Donald Trump last week that he isn’t a target of any part of Special Counsel Robert Mueller’s investigation, according to two people familiar with the matter.

Rosenstein, who brought up the Mueller probe himself, offered the assurance during a meeting with Trump at the White House last Thursday, a development that helped tamp down the president’s desire to remove Rosenstein or Mueller, the people said.

After the meeting, Trump told some of his closest advisers that it’s not the right time to remove either man, since he’s not a target of the probe. One person said that Trump doesn’t want to take any action that would drag out the investigation.

The change in attitude by the president comes after weeks of attacks on the special counsel and the Justice Department, raising questions about whether he might take drastic steps to shut down the probe.

The shift gives some breathing room for Mueller, as well as Rosenstein, who has been criticized strongly by House Republicans for being slow to comply with requests for classified documents. Last week’s meeting was set up in part to allow Rosenstein to assuage Trump’s frustration with his decisions.

At the same time, Rosenstein’s message may have been based on a technicality. Trump may not officially be a target, but Mueller hasn’t ruled out making him one at some point in the future, according to a U.S. official with knowledge of the unfolding investigation.

Trump, who still hasn’t ruled out removing Rosenstein and Mueller at some point, signaled his shift in approach to them on Wednesday, responding to a reporter’s question about their fate by saying they are “still here.”

“They’ve been saying I’m going to get rid of them for the last three months, four months, five months,” Trump said at his Mar-a-Lago resort in Palm Beach, Florida. “And they’re still here. We want to get the investigation over with, done with, put it behind us. And we have to get back to business.”

The moment echoes another conversation early in Trump’s presidency, when he spoke with then-FBI Director James Comey.

Back in March 2017, Comey told Trump he wasn’t a target in the FBI’s investigation of Russian meddling in the 2016 election. Comey wrote in his new book, that Trump repeatedly asked him to help lift “the cloud” hanging over him by publicly announcing that he wasn’t under investigation.

Comey refused to make a public announcement, writing that “the FBI and Department of Justice had been reluctant to make public statements that we did not have an open case on President Trump for a number of reasons, most important that it would create a duty to correct that statement should that status change.”

Ever since FBI agents raided the home and office of his lawyer Michael Cohen earlier this month, Trump has been egged on by some of his strongest supporters to strike back at Mueller.

Court papers filed after the raid revealed that the U.S. attorney’s office in the Southern District of New York has been investigating Cohen for months, following a referral from Mueller. That referral was approved by Rosenstein, according to a person familiar with the matter.

In his remarks Wednesday, Trump called the Mueller-led investigation “a hoax” created by Democrats “to soften the blow of a loss.”

“As far as the investigation, nobody has ever been more transparent,” he said during a news conference with visiting Japanese Prime Minister Shinzo Abe. “I have instructed the lawyers, ‘Be totally transparent.”‘