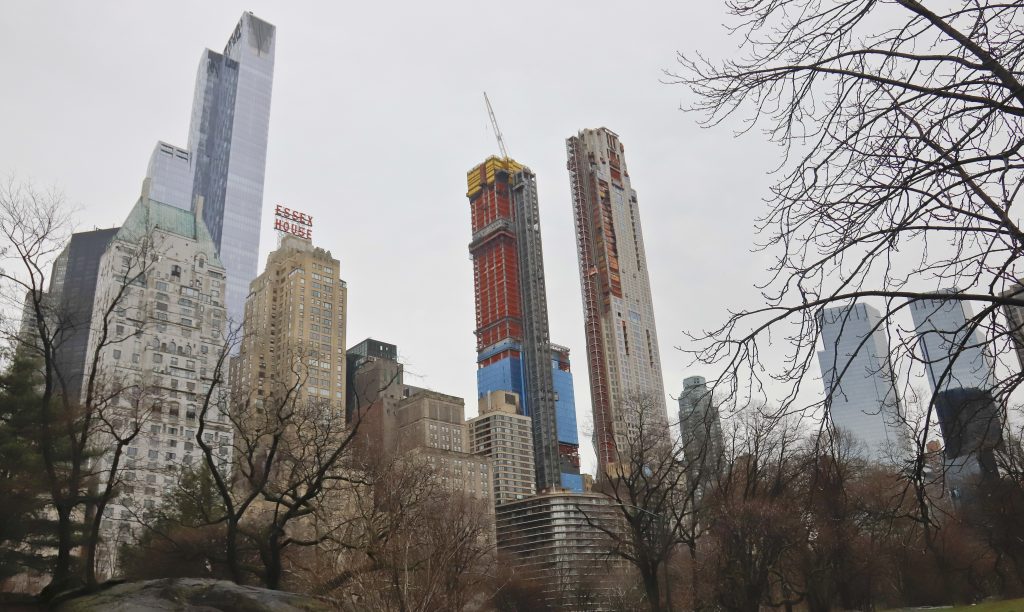 Some of the world’s wealthiest people have apartments in the half-dozen new skyscrapers built along a stretch of Manhattan’s 57th Street known as “Billionaires’ Row.” And soon they may have an unwanted new neighbor: a homeless shelter.

The city has approved a plan to house 140 single men in what was once the budget Park Savoy Hotel on West 58th Street, a modest building right next door to the back entrance of One57, one of the sleek new towers springing up in Manhattan to serve the super-rich.

Unit owners at One57 include billionaire Michael Dell, who set a record for the most expensive home ever sold in New York City when he paid $100 million for his condo in 2014.

The placement of the shelter in such a location is in line with campaign promises by Democratic Mayor Bill de Blasio, who won office by assailing income inequality and public policies tilted to favor the wealthy. But the proposed shelter, steps from Central Park, has been met with howls of outrage from some people who live on the surrounding blocks, many of whom are not rich.

At a recent meeting about the project, angry residents, shopkeepers and restaurant owners booed and yelled, “Not in this neighborhood!”

“We’re completely baffled by how this shelter was planned,” said Suzanne Silverstein, president of the West 58th Street Coalition, which is fighting the hotel-to-shelter conversion.

Opponents say the homeless men could be a security risk for both pricey apartment owners and residents of older, rent-controlled buildings on West 58th Street, whose sidewalks are crowded with New Yorkers and tourists, baby carriages and dogs.

“West 58th Street is the billionaires’ backyard, but it’s the front yard of middle-class families with children, and senior citizens,” said David Achelis, a recording producer who has lived in the neighborhood for 40 of his 67 years.

A stop-work order was issued Feb. 8 by the Department of Buildings after inspectors found ongoing construction in the century-old, nine-story building. The order remains in effect until the building is granted the necessary permits.

“The city approved this project with no notice for the community to be heard,” said the coalition’s attorney, Randy Mastro. “The city has acted illegally under the city charter, which requires public notice when a contract is being awarded.”

De Blasio has defended the project, which comes as his administration seeks to build new shelters to accommodate a record number of homeless people.

“We said we were going to do it everywhere. We should be doing it in places that are the privileged parts of town as well as every other kind of community,” he said on “The Brian Lehrer Show” on WNYC Radio.

Security cameras will be installed, monitored by 24-hour guards, and there will be a 10 p.m. curfew, said Isaac McGinn, spokesman for the city Department of Homeless Services.

Opponents also have raised concerns about the cost, noting that the site will be more expensive to operate than others in the outer boroughs.

To run the shelter, the city has a nine-year, $63-million proposed contract with the nonprofit Westhab, which is leasing the Manhattan site from the defunct hotel’s owner, New Hampton LLC, for $2.6 million a year, to be reimbursed by the city. New Hampton’s managing agent, John Pappas, did not respond to requests for comment, nor did Westhab.

Robin Siskin, a lawyer who lives in a modest apartment across the street from the proposed shelter site, said the homeless men would not be able to afford a neighborhood where a burger at a diner can cost $20.

“My concern is that the men are being set up to fail, while somebody is lining their pockets with money at the expense of the community,” she said. “This is a moneymaker for an LLC, pure and simple.”

But residents can expect a warm welcome from nearby Carnegie Hall, which occasionally offers homeless New Yorkers free tickets.

Another supporter is John Sheehan, a neighborhood resident and director of outreach services for the Fifth Avenue Presbyterian Church.

“I believe in the right to housing,” he said. “We have an enormous problem in New York City and we need places to house people.”