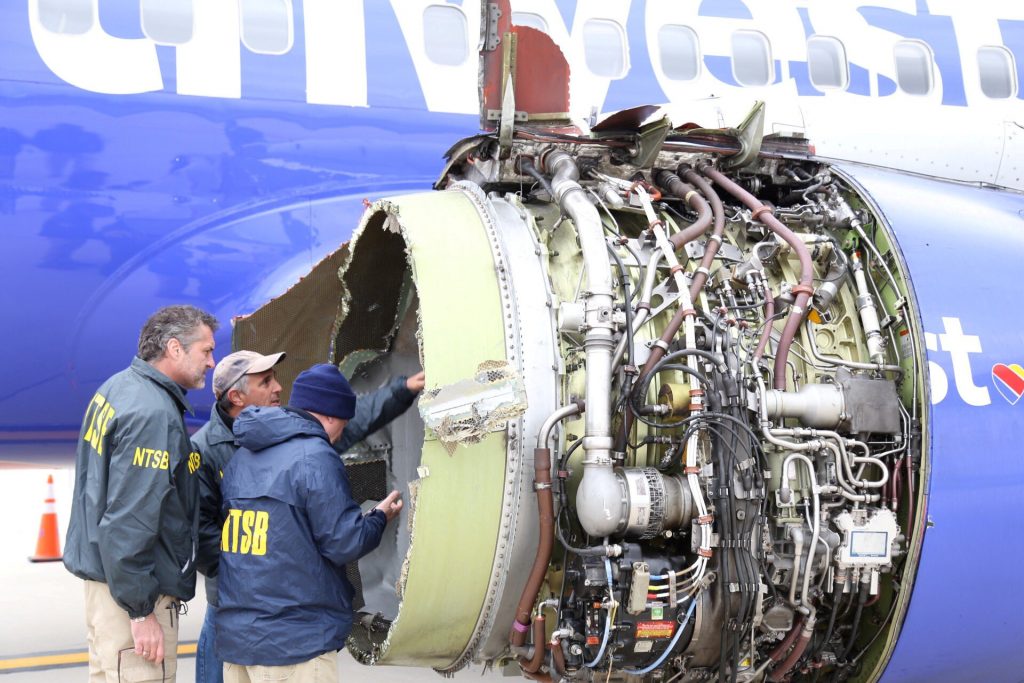 European regulators this month began requiring an inspection by early next year of the type of engine that blew apart on a fatal Southwest Airlines flight on Tuesday, and a source said U.S. regulators were near a similar rule.

The actions by regulators show that there has been some concern, albeit non-urgent, about the engine, a workhorse of the global civil aviation fleet that has logged more than 350 million hours of safe travel but was also being examined after a 2016 accident.

Southwest Flight 1380 made an emergency landing in Philadelphia on Tuesday after an engine ripped apart mid-air, shattering a window on the Boeing 737 and nearly sucking a passenger through. One of 144 passengers died.

The CFM56 engine was produced by a joint venture of General Electric Co. and France’s Safran SA, called CFM International, and is one of the most common engines, paired with the world’s most-sold plane, the Boeing 737. Boeing and CFM said they will help with the U.S. National Transportation Safety Board’s (NTSB) investigation into the incident.

Southwest Airlines Co. said it is speeding up inspections of all related engines out of extra caution, which it expects to complete within 30 days. Minimal flight disruptions may result, it said.

An early review of the failed engine found apparent metal fatigue where a fan blade had broken off, Robert Sumwalt, chairman of the NTSB, told reporters.

“We are very concerned” about metal fatigue, Sumwalt said. “There needs to be proper inspection mechanisms in place to check for this before there’s a catastrophic event.”

In August 2016, a Southwest flight made a safe emergency landing in Pensacola, Florida, after a fan blade separated from the same type of engine, and debris ripped a foot-long hole above the left wing.

The 2016 incident prompted the Federal Aviation Administration (FAA) to propose ultrasonic inspections of similar fan blades and their replacement should they fail the test. Sumwalt said the NTSB will review whether the engines involved in Tuesday’s incident might have been subject to the directive, which is not yet finalized.

The FAA had “determined the unsafe condition described previously is likely to exist or develop in other products of the same type design,” according to its proposal last year.

The European Aviation Safety Agency (EASA) issued an airworthiness directive last month requiring a one-time ultrasonic inspection of each affected fan blade on models of CFM56 engines within nine months of April 2. It said that CFM had sent a service bulletin recommending inspections, leading regulators to make the directive.

EASA said the directive was issued after the failure of a fan blade on a CFM56 engine, which led to the uncontained release of debris. It did not name the airline involved or the incident, but the service bulletin it referenced was the same as in the FAA proposal.

“This condition, if not detected and corrected, could lead to fan blade failure, possibly resulting in uncontained forward release of debris, with consequent damage to the engine and the airplane,” EASA said.

Southwest’s voluntary, accelerated checks will be ultrasonic. American, United and Delta Airlines did not immediately comment if they too would speed up such checks, though it was unclear if they at all needed to.

The FAA proposal estimated 220 engines on U.S. registered planes would be affected and that checks would require two hours of labor per inspection.

Any design issues with the long-established CFM56 engine could have repercussions for fleets worldwide. But given that thousands of the engines are already in use globally, industry experts say the focus of the investigation is more likely to fall on one-off production or maintenance issues.

A government source said the FAA could finalize its directive soon. The FAA did not respond to a request for comment late on Tuesday, and Southwest declined to say whether it had ultrasonically examined the engine involved in the incident, because the event is under investigation by the NTSB.