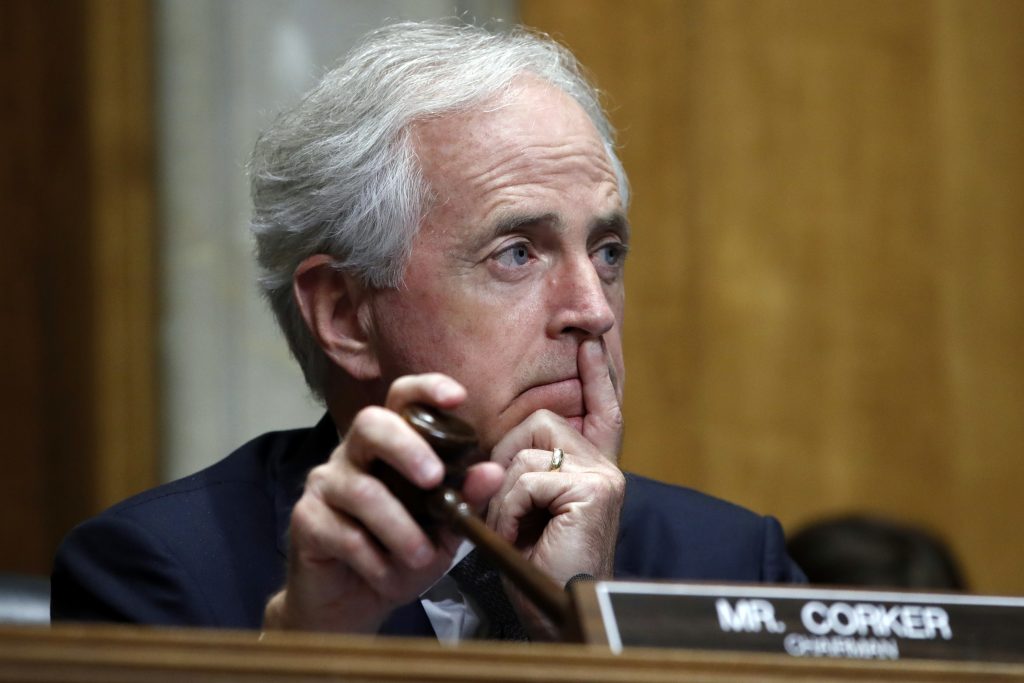 Retiring Sen. Bob Corker (R-Tenn.) praised the leading Democratic candidate to replace him Wednesday and said he would not campaign against him — highlighting questions about Republican unity in a marquee midterm battleground.

Corker has been outspoken about his friendship with Phil Bredesen, a former Democratic governor seeking to succeed him next year. His posture in recent days comes as other party leaders are trying to rally support for Rep. Marsha Blackburn, the likely Republican nominee.

Asked to assess the state-of-play, Corker said he guesses that Bredesen is leading Blackburn by roughly six percentage points — a “real six,” he said.

Republicans are trying to keep their narrow 51-to-49 Senate majority in the November elections. Tennessee is emerging as an increasingly important contest, with recent polls showing a competitive race. Republicans believe they will need to run a strong campaign to fend off what could be a formidable challenge from Bredesen.

Corker’s comments, which could fuel Bredesen’s effort to win over crossover voters in a state that leans conservative, could complicate their work.

Speaking at a breakfast hosted by the Christian Science Monitor, Corker called Bredesen a longtime friend and described him as a committed public servant. He argued that Bredesen would have crossover appeal, and noted that a number of top Republican donors in the state were hosting fundraisers for the ex-governor.

Corker’s comments have not been well received by some Blackburn allies, who have privately dismissed them. The relationship between Corker and Blackburn has not been easy this year. After Corker first said he would not run for reelection, he briefly and publicly reconsidered before standing by his original decision. Blackburn’s campaign was already in full swing at that point.

Corker voiced some support for Blackburn last week, wishing her well in the campaign. He wrote on Twitter that he would contribute to Blackburn’s campaign “now that the Republican primary has essentially concluded.”

But that brief message contrasts sharply with the detailed praise he has offered Bredesen.

Democratic leaders are trying to draw a distinction between Bredesen and Blackburn that is rooted in casting Bredesen as the less-partisan candidate. Democratic Senatorial Campaign Committee Chairman Chris Van Hollen, Md., last week called Blackburn a “highly ideological member of Congress” who is the “opposite” of the former governor.

Asked if he was relieved that Corker decided not to get back in the race, Van Hollen declined to comment.

Sen. Lamar Alexande (R-Tenn.) called Blackburn a “very good candidate” last week and reiterated his support for her. He also said she is running against a “very well-respected opponent” in Bredesen.

Corker said Bredesen could win over enough Republican voters to be victorious, unless Republicans are successful in making the Tennessee race a national referendum on which party controls the Senate.

“At the end of the day, the question will be, will people look at this as something that control of the Senate is at stake?” he said.

Advisers to Blackburn declined to comment directly on Corker’s remarks Wednesday. But Blackburn campaign spokeswoman Abbi Sigler accused Bredesen of being a “solid vote” for Senate Minority Leader Charles E. Schumer (D-N.Y.) and the policies of the Clinton and Obama years.

Explaining Bredesen’s potential, Corker said many senators from Tennessee in recent decades have been national figures who at times are willing to break with their political parties in the interest of forging consensus, citing the state’s senior senator, Alexander, as well as former senators Howard Baker, Al Gore, Fred Thompson and Bill Frist.

“There’s something in the water in Tennessee,” Corker said. “We’ve had senators that, generally speaking, have been statesmen that are willing to burn political capital to solve our nation’s problems and are thoughtful people.”